Chiton (costume)
This article is about clothing. For the mollusk, see chiton.

A young man with a chiton.

The chiton is the same as the tunica and is a sewn garment, unlike the peplos, a draped garment held on the shoulders by a fibulae.

There are two forms of chiton, the Doric chiton and the later Ionic chiton. The "Doric" style was simpler and had no "sleeves", being simply pinned, sewn, or buttoned at the shoulder. The "Ionic" style was made of a much wider piece of fabric, and was pinned, sewn, or buttoned all the way from the neck to the wrists and the excess fabric gathered by the zone or girdled at the waist. By the late Archaic, Ionic chitons had become less common, especially for men. 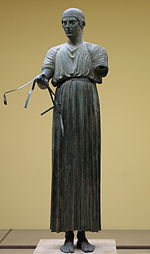 Charioteer in a Ionic chiton.

The Doric chiton is a single rectangle of woolen or linen fabric. It can be worn plain or with an overfold called an apotygma which is more common to women. It can be draped and fastened at the shoulder by pins (fibulae) or sewing, or by buttons.[1] The Ionic chiton could also be made from linen or wool and was draped without the fold and held in place from neck to wrist by several small pins. A large belt called a zoster could be worn over the chiton, usually under the breast ("high-girdled") or around the waist ("low-girdled") or a narrower "zone" or girdle could be used. The chiton's length was greater than the height of the wearer, so excessive fabric was pulled above the belt, like a blouse.

A double-girdled style also existed. The chiton was often worn in combination with the heavier himation over it, which had the role of a cloak. When used alone (without a himation), the chiton was called a monochiton. A long chiton which reached the heels was called a chiton poderes, while a longer one which dragged the ground was called a chiton syrtos or an (Greek: ἐλκεχιτώνες, elkekhitōnes) (literally, a chiton that drags the ground).[2] A woman's chiton would always be worn at ankle length. Men wore the long chiton during the Archaic period, but later wore it at knee length, except for certain occupations such as priests and charioteers, and also the elderly. A sleeved form was worn by priests and actors. The colour or pattern would often indicate status, but varied over time. The chiton was the outfit of Aphrodite because it was considered very feminine, although men also wore it. Dionysus is often depicted wearing it. The chiton was also worn by the Romans after the third century BC. However, they referred to it as a tunica. An example of the chiton can be seen, worn by the caryatids in the porch of the Athens Erechtheum. A charioteer's chiton can be see on the Charioteer of Delphi (474 BC).[3]

Greek men sometimes wore a short version of chiton known as the chitoniskos. On Greek vases, men are pictured wearing the chitoniskos while hunting, farming, and under their armor for war. The smaller chiton could also be worn over another chiton.[4]

The word chiton appears in the Iliad.[5] In Greek, khitōn could be used to refer not only to a cloth garment covering the skin, but also to other sorts of covering such as a coat of mail, a membrane around a bodily organ, or the pod containing seeds. The Greek word is an adoption from a Central Semitic source (most probably Northwest Semitic, the exact source language not being known) and is akin to the Hebrew word kětōnet 'tunic'. The Central Semitic word that was the source of Greek khitōn was itself adapted from the Akkadian word kitû, meaning 'flax' and 'linen'. This Akkadian word in turn comes from Sumerian gada (which has the variant gida). The Latin word tunica, source of the English word tunic, is taken from a Phoenician word of kindred origin.[6]