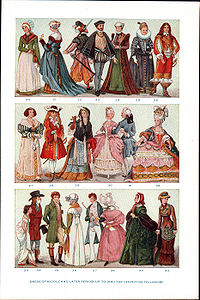 Overview of fashion from The New Student's Reference Work, 1914.

The history of Western fashion is the story of the changing fashions in clothing for men and women in Western Europe and other countries under its influence (that is, the Western world) from the 12th century to the present.

History of fashion by period