The Old English wifman meant "female human" (werman meant "male human". Man or mann had a gender neutral meaning of "human", corresponding to Modern English "one" or "someone". However in around 1000AD "man" started to be used more to refer to "male human", and in the late 1200s began to inevitably displace and eradicate the original word "werman").[1] The medial labial consonants coalesced to create the modern form "woman"; the initial element, which meant "female," underwent semantic narrowing to the sense of a married woman ("wife").

Symbol of the planet and Roman goddess Venus, also used to indicate the female sex.

A very common Indo-European root for woman, *gwen-, is the source of English queen (Old English cwēn primarily meant woman, highborn or not; this is still the case in Danish, with the modern spelling kvinde, as well as in Swedish kvinna), as well as gynaecology (from Greek γυνή gynē), banshee fairy woman (from Irish bean woman, sí fairy) and zenana (from Persian زن zan). The Latin fēmina, whence female, is likely from the root in fellāre (to suck), referring to breastfeeding.[2][3]

The symbol for the planet Venus is the sign also used in biology for the female sex. It is a stylized representation of the goddess Venus's hand mirror or an abstract symbol for the goddess: a circle with a small equilateral cross underneath (Unicode: ♀). The Venus symbol also represented femininity, and in ancient alchemy stood for copper. Alchemists constructed the symbol from a circle (representing spirit) above an equilateral cross (representing matter).

Womanhood is the period in a female's life after she has transitioned through childhood and adolescence, generally age 18. Puberty generally begins at about age 10, followed by menarche at age 12 to 13. Many cultures have rites of passage to symbolize a girl's coming of age, such as confirmation in some branches of Christianity, bat mitzvah in Judaism, or even just the custom of a special celebration for a certain birthday (generally between 12 and 21), like the Quinceañera of Latin America. The word woman can be used generally, to mean any female human, or specifically, to mean an adult female human as contrasted with girl. The word girl originally meant "young person of either sex" in English;[citation needed] it was only around the beginning of the 16th century that it came to mean specifically a female child. The term girl is sometimes used colloquially to refer to a young or unmarried woman, however during the early 1970s feminists challenged such use because the use of the word to refer to a fully grown woman may cause offence. In particular, previously common terms such as office girl are no longer used.

Conversely, in certain cultures which link family honor with female virginity, the word girl is still used to refer to a never-married woman; in this sense it is used in a fashion roughly analogous to the obsolete English maid or maiden. Referring to an unmarried female as a woman may, in such a culture, imply that she is sexually experienced, which would be an insult to her family.

There are various words used to refer to the quality of being a woman. The term "womanhood" merely means the state of being a woman, having passed the menarche; "femininity" is used to refer to a set of supposedly typical female qualities associated with a certain attitude to gender roles; "womanliness" is like "femininity", but is usually associated with a different view of gender roles; "femaleness" is a general term, but is often used as shorthand for "human femaleness"; "distaff" is an archaic adjective derived from women's conventional role as a spinner, now used only as a deliberate archaism; "muliebrity" is a neologism (derived from the Latin) meant to provide a female counterpart of "virility", but used very loosely, sometimes to mean merely "womanhood", sometimes "femininity" and sometimes even as a collective term for women.

The earliest women whose names are known were: 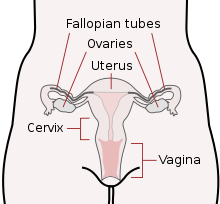 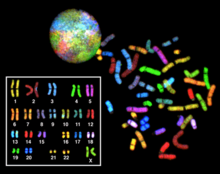 Spectral karyotype of a human female. 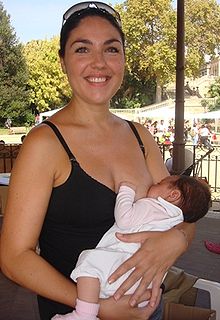 In terms of biology, the female sex organs are involved in the reproductive system, whereas the secondary sex characteristics are involved in nurturing children or, in some cultures, attracting a mate. The ovaries, in addition to their regulatory function producing hormones, produce female gametes called eggs which, when fertilized by male gametes (sperm), form new genetic individuals. The uterus is an organ with tissue to protect and nurture the developing fetus and muscle to expel it when giving birth. The vagina is used in copulation and birthing (although the word vagina is often colloquially and incorrectly used for the vulva or external female genitalia, which also includes the labia, the clitoris, and the female urethra). The breast evolved from the sweat gland to produce milk, a nutritious secretion that is the most distinctive characteristic of mammals, along with live birth. In mature women, the breast is generally more prominent than in most other mammals; this prominence, not necessary for milk production, is probably at least partially the result of sexual selection. (For other ways in which men commonly differ physically from women, see Man.)

Biological factors are not sufficient determinants of whether a person considers herself a woman or is considered a woman. Intersex individuals, who have mixed physical and/or genetic features, may use other criteria in making a clear determination. There are also transgender or transsexual women, who were born or physically assigned as male at birth, but identify as women; there are varying social, legal and individual definitions with regard to these issues. (See trans woman.)

Although fewer females than males are born (the ratio is around 1:1.05), due to a longer life expectancy there are only 81 men aged 60 or over for every 100 women of the same age. Women typically have a longer life expectancy than men.[16] This is due to a combination of factors: genetics (redundant and varied genes present on sex chromosomes in women); sociology (such as not being expected in most countries to perform military service); health-impacting choices (such as suicide or the use of cigarettes, and alcohol); the presence of the female hormone estrogen, which has a cardioprotective effect in premenopausal women; and the effect of high levels of androgens in men. Out of the total human population, there are 101.3 men for every 100 women (source: 2001 World Almanac).

Most women go through menarche and are then able to become pregnant and bear children.[17] This generally requires internal fertilization of her eggs with the sperm of a man through sexual intercourse, though artificial insemination or the surgical implantation of an existing embryo is also possible (see reproductive technology). The study of female reproduction and reproductive organs is called gynaecology.

There are some diseases that primarily affect women, such as lupus. Also, there are some sex-related illnesses that are found more frequently or exclusively in women, e.g., breast cancer, cervical cancer, or ovarian cancer. Women and men may have different symptoms of an illness and may also respond differently to medical treatment. This area of medical research is studied by gender-based medicine.

During early fetal development, embryos of both sexes appear gender-neutral; the release of hormones is what changes physical appearance male or female. As in cases without two sexes, such as species that reproduce asexually, the gender-neutral appearance is closer to female than to male. 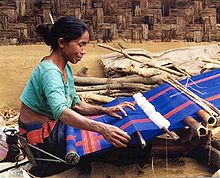 A woman weaving. Textile work has historically been a female occupation in many cultures.

In many prehistoric cultures, women assumed a particular cultural role. In hunter-gatherer societies, women were generally the gatherers of plant foods, small animal foods, fish, and learned to use dairy products, while men hunted meat from large animals. These tasks were often given to the women because they were not only seen as safe, but also as easy. Men had a hard time relying on women for food. Because the hunger and survival of the society trumped anything else, men decided that women could not be trusted with feeding an entire society.Other anthropologists however have suggested that women only began to follow this behavior after permanent settlement had been made, thus making these gender roles a result of civilization rather than evolution.[citation needed]

In more recent history, the gender roles of women have changed greatly. Traditionally, middle-class women were typically involved in domestic tasks emphasizing child care. For poorer women, especially working class women, although this often remained an ideal,[specify] economic necessity compelled them to seek employment outside the home. The occupations that were available to them were, however, lower in pay than those available to men.

As changes in the labor market for women came about, availability of employment changed from only "dirty", long houred factory jobs to "cleaner", more respectable office jobs where more education was demanded, women's participation in the U.S. labor force rose from 6% in 1900 to 23% in 1923. These shifts in the labor force led to changes in the attitudes of women at work, allowing for the revolution which resulted in women becoming career and education oriented.

Movements advocate equality of opportunity for both sexes and equal rights irrespective of gender. Through a combination of economic changes and the efforts of the feminist movement,[specify] in recent decades women in most societies now have access to careers beyond the traditional homemaker.

Although a greater number of women are seeking higher education, salaries often continue to be less than those of men. In the United States women who are ages 30 to 44 and hold a university degree make only 62 percent of what similarly qualified men do, a lower rate than in all but three of the 19 countries for which numbers are available. The nations with greater inequity in pay are Germany, New Zealand and Switzerland.[18] 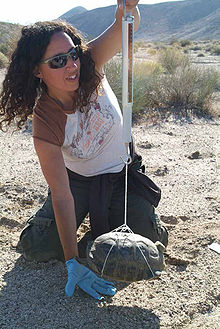 A female biologist weighs a desert tortoise before release.

The educational gender gap in Organisation for Economic Cooperation and Development (OECD) countries has been reduced over the last 30 years. Younger women today are far more likely to have completed a tertiary qualification: in 19 of the 30 OECD countries, more than twice as many women aged 25 to 34 have completed tertiary education than have women aged 55 to 64. In 21 of 27 OECD countries with comparable data, the number of women graduating from university-level programmes is equal to or exceeds that of men. 15-year-old girls tend to show much higher expectations for their careers than boys of the same age.[19]