Scheme of the X chromatid 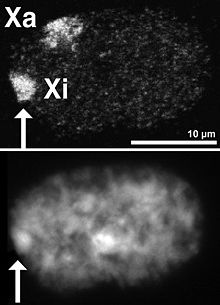 Nucleus of a female amniotic fluid cell. Top: Both X-chromosome territories are detected by FISH. Shown is a single optical section made with a confocal microscope. Bottom: Same nucleus stained with DAPI and recorded with a CCD camera. The Barr body is indicated by the arrow, it identifies the inactive X (Xi).

The X chromosome in humans spans more than 153 million base pairs (the building material of DNA). It represents about 2000 out of 20,000 - 25,0000 genes. Normal human females have 2 X-chromosomes (XX), for a total of nearly 4000 "sex-tied" genes (many of which have nothing to do with sex, other than being attached to the chromosome that is believed to cause sexual bimorphism (or polymorphism if you count more rare variations). Men have, depending on the study, 1400-1900 fewer genes, as the Y chromosome is thought to have only 45 - 78 remaining genes down from an estimated 1438 -~2000 (again, depending on source). [2],[3]

The X chromosome carries a couple of thousand genes but few, if any, of these have anything to do directly with sex determination. Early in embryonic development in females, one of the two X chromosomes is randomly and permanently inactivated in nearly all somatic cells (cells other than egg and sperm cells). This phenomenon is called X-inactivation or Lyonization, and creates a Barr body. X-inactivation ensures that females, like males, have one functional copy of the X chromosome in each body cell. It was previously assumed that only one copy is actively used. However, recent research suggests that the Barr body may be more biologically active than was previously supposed.[5]

It is theorized by Ross et al. 2005 and Ohno 1967 that the X chromosome is at least partially derived from the autosomal (non-sex-related) genome of other mammals, evidenced from interspecies genomic sequence alignments.

The X chromosome is notably larger and has a more active euchromatin region than its Y chromosome counterpart. Further comparison of the X and Y reveal regions of homology between the two. However, the corresponding region in the Y appears far shorter and lacks regions that are conserved in the X throughout primate species, implying a genetic degeneration for Y in that region. Because males have only one X chromosome, they are more likely to have an X chromosome-related disease.

It is estimated that about 10% of the genes encoded by the X chromosome are associated with a family of "CT" genes, so named because they encode for markers found in both tumor cells (in Cancer patients) as well as in the human testis (in healthy patients).[6]