An ovum (plural ova, from the Latin word ovum meaning egg or egg cell) is a haploid female reproductive cell or gamete. Both animals and embryophytes have ova. The term ovule is used for the young ovum of an animal, as well as the plant structure that carries the female gametophyte and egg cell and develops into a seed after fertilization. In lower plants and algae, the ovum is also often called oosphere.

In higher animals, ova are produced by female gonads (sexual glands) called ovaries and all of them are present at birth in mammals, and mature via oogenesis.

A sperm cell fusing with an ovum 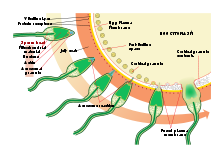 The process of fertilizing an ovum (Top to bottom)

In the viviparous animals (which include humans and all other placental mammals), the ovum is fertilized inside the female body, and the embryo then develops inside the uterus, receiving nutrition directly from the mother.

The human ova grow from primitive germ cells that are embedded in the substance of the ovaries. Each of them divides repeatedly to give rise to several smaller cells, the oogonia. The oogonia then develop into the ova, the primary oocytes.[1]

The ovum is one of the largest cells in the human body, typically visible to the naked eye without the aid of a microscope or other magnification device. The human ovum measures approximately 0.12 mm in diameter.[2]

In protists, fungi and many plants, such as bryophytes, ferns, and gymnosperms, ova are produced inside archegonia. Since the archegonium is a haploid structure, egg cells are produced via mitosis. The typical bryophyte archegonium consists of a long neck with a wider base containing the egg cell. Upon maturation, the neck opens to allow sperm cells to swim into the archegonium and fertilize the egg. The resulting zygote then gives rise to an embryo, which will grow out of the archegonium as a young sporophyte. 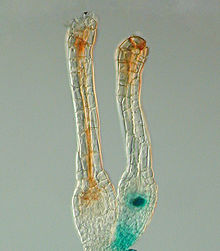 Gene expression pattern determined by histochemical GUS assays in Physcomitrella patens. The Polycomb gene FIE is expressed (blue) in unfertilised egg cells of the moss Physcomitrella patens (right) and expression ceases after fertilisation in the developing diploid sporophyte (left). In situ GUS staining of two female sex organs (archegonia) of a transgenic plant expressing a translational fusion of FIE-uidA under control of the native FIE promoter

In the moss Physcomitrella patens, the Polycomb protein FIE is expressed in the unfertilised egg cell (Figure, right) as the blue colour after GUS staining reveals. Soon after fertilisation the FIE gene is inactivated (the blue colour is no longer visible, left) in the young embryo. [3]

Ooplasm (also: oöplasm) is the yolk of the ovum, a cell substance at its center, which contains its nucleus, named the germinal vesicle, and the nucleolus, called the germinal spot.[4]

The ooplasm consists of the cytoplasm of the ordinary animal cell with its spongioplasm and hyaloplasm, often called the formative yolk; and the nutritive yolk or deutoplasm, made of rounded granules of fatty and albuminoid substances imbedded in the cytoplasm.[4]

Mammalian ova contain only a tiny amount of the nutritive yolk, for nourishing the embryo in the early stages of its development only. In contrast, bird eggs contain enough to supply the chick with nutriment throughout the whole period of incubation.[4]

In the oviparous animals (all birds, most fishes, amphibians and reptiles) the ova develop protective layers and pass through the oviduct to the outside of the body. They are fertilized by male sperm either inside the female body (as in birds), or outside (as in many fishes). After fertilization, an embryo develops, nourished by nutrients contained in the egg. It then hatches from the egg, outside the mother's body. See egg (biology) for a discussion of eggs of oviparous animals.

The egg cell's cytoplasm and mitochondria (and chloroplasts in plants) are the sole means the egg is able to reproduce by mitosis and eventually form a blastocyst after fertilization.

There is an intermediate form, the ovoviviparous animals: the embryo develops within and is nourished by an egg as in the oviparous case, but then it hatches inside the mother's body shortly before birth, or just after the egg leaves the mother's body. Some fish, reptiles and many invertebrates use this technique.