In the field of human genetics, Mitochondrial Eve refers to the matrilineal "MRCA" (most recent common ancestor). In other words, she was the woman from whom all living humans today descend, on their mother's side, and through the mothers of those mothers and so on, back until all lines converge on one person. Because all mitochondrial DNA (mtDNA) is generally passed from mother to offspring without recombination, all mitochondrial DNA (mtDNA) in every living person is directly descended from hers by definition. Mitochondrial Eve is the female counterpart of Y-chromosomal Adam, the patrilineal most recent common ancestor, although they lived thousands of years apart.

Mitochondrial Eve is estimated to have lived around 200,000 years ago,[2] most likely in East Africa,[3] when Homo sapiens sapiens ("anatomically modern humans") were developing as a population distinct from other human sub-species.

Mitochondrial Eve lived much earlier than the out of Africa migration that is thought to have occurred between 95,000 to 45,000 BP.[4] The dating for 'Eve' was a blow to the multiregional hypothesis, and a boost to the hypothesis that modern humans originated relatively recently in Africa and spread from there, replacing more "archaic" human populations such as Neanderthals. As a result, the latter hypothesis is now the dominant one. 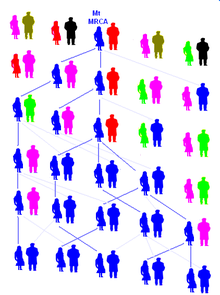 Through random drift or selection the female-lineage will trace back to a single female, such as Mitochondrial Eve

Without a DNA sample, it is not possible to reconstruct the complete genetic makeup (genome) of any individual who died very long ago. By analysing descendants' DNA, however, parts of ancestral genomes are estimated by scientists. Mitochondrial DNA (mtDNA) and Y-chromosome DNA are commonly used to trace ancestry in this manner. mtDNA is generally passed un-mixed from mothers to children of both sexes, along the maternal line, or matrilineally.[5][6] Matrilineal descent goes back to our mothers, to their mothers, until all female lineages converge.

Branches are identified by one or more unique markers which give a mitochondrial "DNA signature" or "haplotype" (e.g. the CRS is a haplotype). Each marker is a DNA base-pair that has resulted from an SNP mutation. Scientists sort mitochondrial DNA results into more or less related groups, with more or less recent common ancestors. This leads to the construction of a DNA family tree where the branches are in biological terms clades, and the common ancestors such as Mitochondrial Eve sit at branching points in this tree. Major branches are said to define a haplogroup (e.g. CRS belongs to haplogroup H), and large branches containing several haplogroups are called "macro-haplogroups".

The variation of mitochondrial DNA between different people can be used to estimate the time back to a common ancestor, such as Mitochondrial Eve. This works because, along any particular line of descent, mitochondrial DNA accumulates mutations at the rate of approximately one every 3,500 years.[7][8][9] A certain number of these new variants will survive into modern times and be identifiable as distinct lineages. At the same time some branches, including even very old ones, come to an end, when the last family in a distinct branch has no daughters.

Mitochondrial Eve is the most recent common matrilineal ancestor for all modern humans. Whenever one of the two most ancient branch lines dies out, the MRCA will move to a more recent female ancestor, always the most recent mother to have more than one daughter with living maternal line descendants alive today. The number of mutations that can be found distinguishing modern people is determined by two criteria: firstly and most obviously, the time back to her, but secondly and less obviously by the varying rates at which new branches have come into existence and old branches have become extinct. By looking at the number of mutations which have been accumulated in different branches of this family tree, and looking at which geographical regions have the widest range of least related branches, the region where Eve lived can be proposed.

Not the only woman

One of the misconceptions of mitochondrial Eve is that since all women alive today descended in a direct unbroken female line from her that she was the only woman alive at the time.[10][11] Nuclear DNA studies indicate that the size of the ancient human population never dropped below tens of thousands. There may have been many other women alive at Eve's time with descendants alive today, but sometime in the past, those lines of descent included at least one male, who do not pass on their mother's mitochondrial DNA, thereby breaking the line of descent. By contrast, Eve's lines of descent to each person alive today includes precisely one purely matrilineal line.[10]

Not a contemporary of "Adam"

Sometimes mitochondrial Eve is assumed to have lived at the same time as Y-chromosomal Adam, perhaps even meeting and mating with him. Like mitochondrial "Eve", Y-chromosomal "Adam" probably lived in Africa; however, this "Eve" lived much earlier than this "Adam" – perhaps some 50,000 to 80,000 years earlier.[12]

Not the most recent ancestor shared by all humans

Mitochondrial Eve is the most recent common matrilineal ancestor, not the most recent common ancestor (MRCA). Since the mtDNA is inherited maternally and recombination is either rare or absent, it is relatively easy to track the ancestry of the lineages back to a MRCA; however this MRCA is valid only when discussing mitochondrial DNA. An approximate sequence from newest to oldest can list various important points in the ancestry of modern human populations:

Implications of dating and placement of Eve

Initially there was a lot of resistance against the Mitochondrial Eve hypothesis. This resistance was due, in part, to the popularity of the Multiregional Evolution hypothesis amongst some leading paleoanthropologists such as Milford Wolpoff. This prevailing theory held that the evolution of humanity from the beginning of the Pleistocene 2.5 million years BP to the present day has been within a single, continuous human species, evolving worldwide to modern Homo sapiens. More resistance came from those who argued that there was too little time between Homo erectus and modern Homo sapiens to allow for another new species, and others who argued that for regional evolution from archaic hominin forms into modern ones. Consequently, the finding of a recent maternal ancestor for all humans in Africa was very controversial.

Cann, Stoneking & Wilson (1987)'s placement of a relatively small population of humans in sub-saharan Africa, lent appreciable support for the recent Out of Africa hypothesis. The current concept places between 1,500 and 16,000 effectively interbreeding individuals (census 4,500 to 48,000 individuals) within Tanzania and proximal regions. Later, Tishkoff et al. (2009) using data from many loci (not just mitochondrial DNA) extrapolated that the Angola-Namibia border region near the Atlantic Ocean is likely to be near the geographical point of origin of modern human genetic diversity. In its relatively southern origin proposals, this autosomal study was considered by the authors to be broadly consistent with a previous mitochondrial DNA studies, including one by some of the same authors which associated the origins of mitochondrial haplogroups L0 and L1 with "click languages" in southern and eastern Africa.[14]

To some extent the studies have already revealed that the presence of archaic homo sapiens in Northwest Africa (Jebel Irhoud) were not likely part of the contiguous modern human population. In addition, the older remains at Skhul and Qafzeh are also unlikely part of the constrict human population, evidence currently indicates humans expanded in the region no earlier than 90,000 BP.[citation needed] Tishkoff argues that humans might have migrated to the Levant before 90 Ka, but this colony did not persist in SW Asia.[citation needed] Better defined is the genetic separation among Neanderthals, Flores hobbit, Java man, and Peking man. In 1999 Krings et al., eliminated problems in molecular clocking postulated by Nei, 1992 when it was found the mtDNA sequence for the same region was substantially different from the MRCA relative to any human sequence. Currently there are 6 fully sequenced Neanderthal mitogenomes, each falling within a genetic cluster less diverse than that for humans, and mitogenome analysis in humans has statistically markedly reduced the TMRCA range so that it no longer overlaps with Neandertal/human split times. Of all the non-African hominids European archaics most closely resembled humans, indicating a wider genetic divide with other hominids.

Since the multiregional evolution hypothesis (MREH) revolved around a belief that regional modern human populations evolved in situ in various regions (Europe: Neandertals to Europeans, Asia: Homo erectus to East Asians, Australia: Sumatran erectines to indigenous Australians), these results demonstrated that a pure MREH hypothesis could not explain one important genetic marker.

This audio file was created from a revision of Mitochondrial Eve dated 2005-04-22, and does not reflect subsequent edits to the article. (Audio help)
More spoken articles