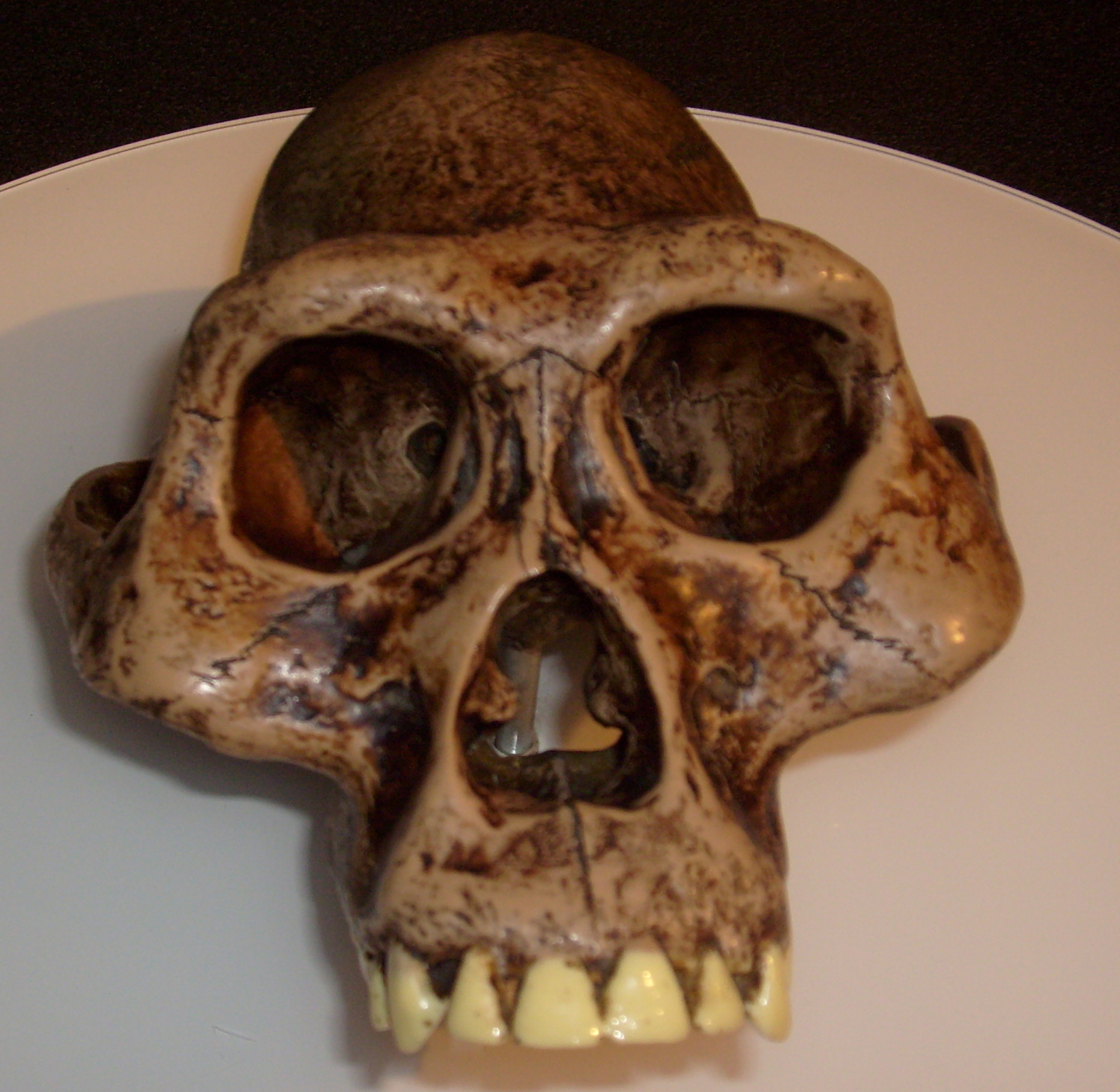 The "Australopithecus" ( "australis" "of the south", Greek πίθηκος "pithekos" "ape") is a group of extinct s, the gracile australopithecines, closely related to humans.

Gracile australopithecines shared several traits with modern apes and humans, and were widespread throughout Eastern and by a time between 3.0 and 3.9 million years ago. The earliest evidence of fundamentally bipedal hominids can be observed at the site of in . This site contains hominid footprints that are remarkably similar to those of modern humans and have been dated to as old as 3.7 million years. Until recently, the footprints have generally been classified as australopithecine because that had been the only form of pre-human known to have existed in that region at that time; however, some scholars have considered reassigning them to a yet unidentified very early of the genus "Homo"Fact|date=July 2008.

According to the , both human ("", "Australopithecus" and "Homo") and ("" and "") lineages diverged from a common ancestor about 5 to 6 million years ago, if we assume a constant rate of evolution. It is theoretically more likely for evolution to happen slower, as opposed to quicker, from the date suggested by a gene clock (the result of which is given as an "", i.e., the latest possible date of diversion.) However, hominids discovered more recently are somewhat older than the would theorize. "", commonly called "Toumai" is about 7 million years old and "" lived at least 6 million years ago. Since little is known of them, they remain controversial among scientists since the in humans has determined that humans and chimpanzees had an evolutionary split at least a million years later. One theory suggests that humans and chimpanzees diverged once, then interbred around one million years after diverging. [cite journal | author = Bower, Bruce | date = May 20, 2006 | title = Hybrid-Driven Evolution: Genomes show complexity of human-chimp split | journal = Science News | volume = 169 | issue = 20 | pages = 308 | url = http://www.sciencenews.org/articles/20060520/fob4.asp | format = Dead link|date=June 2008 &ndash; [http://scholar.google.co.uk/scholar?hl=en&lr=&q=author%3A+intitle%3AHybrid-Driven+Evolution%3A+Genomes+show+complexity+of+human-chimp+split&as_publication=Science+News&as_ylo=&as_yhi=&btnG=Search Scholar search] ]

The s of most species of "Australopithecus" were roughly 35% of the size of that of a modern brain. Most species of "Australopithecus" were diminutive and gracile, usually standing no more than 1.2 and 1.4 m (approx. 4 to 4.5 feet) tall. In several variations of australopithecine there is a considerable degree of , meaning that males are larger than females. Modern hominids do not appear to display sexual dimorphism to the same degree — particularly, modern humans display a low degree of sexual dimorphism, with males being only 15% larger than females, on average. In australopithecines, however, males can be up to 50% larger than females. New research suggests that sexual dimorphism may be far less pronounced than this, but there is still much debate on the subject. [cite book | last = Beck | first = Roger B. | authorlink = | coauthors = Linda Black, Larry S. Krieger, Phillip C. Naylor, Dahia Ibo Shabaka, | title = World History: Patterns of Interaction | publisher = McDougal Littell | date = 1999 | location = Evanston, IL | pages = | url = | doi = | id = | isbn = 0-395-87274-X ]

Although opinions differ as to whether the species "aethiopicus, boisei" and "robustus" should be included within the genus "Australopithecus", the current consensus in the scientific community is that they should be placed in a distinct genus, "", which is believed to have developed from the ancestral "Australopithecus" line. Up until the last half-decade, the majority of the scientific community included all the species shown in the box at the top of this article in a single genus. However, "Paranthropus" was morphologically distinct from "Australopithecus", and its specialized morphology also implies that its behavior was quite different from that of its ancestor.

The fossil record seems to indicate that "Australopithecus" is the common ancestor of the distinct group of hominids, now called "" (the "robust australopithecines"), and most likely the genus "Homo" which includes modern humans. Although the intelligence of these early hominids was likely no more sophisticated than modern apes, the bipedal stature is the key evidence which distinguishes the group from previous primates who are . The morphology of "Australopithecus" upsets what scientists previously believed, namely, that large brains preceded bipedalism. If "A. afarensis" was the definite hominid which left the footprints at , it strengthens the notion that "A. afarensis" had a small brain but was a biped. Fossil evidence such as this has made it clear that bipedalism far predated large brains. However, it remains a matter of controversy how bipedalism first evolved millions of years ago (several concepts are still being studied). The advantages of bipedalism allowed hands to be free for grasping objects (e.g. carrying food and young), and allowed the eyes to look over tall grasses for possible food sources or predators. However, many anthropologists argue that these advantages were not large enough to cause bipedalism. A recent study of primate evolution and morphology noted that all apes, both modern and fossil, show skeletal adaptations to upright posture of the trunk, and that fossils such as indicate bipedalism around 6 million years ago, around the time of the split between humans and chimpanzees indicated by genetic studies. This suggested that upright, straight-legged walking originally evolved as an adaptation to tree-dwelling. Studies of modern s in showed that these apes use four legs when walking on large stable branches, swing underneath slightly smaller branches, but are bipedal and keep their legs very straight when walking on multiple small flexible branches under 4 cm. diameter, while also using their arms for balance and additional support. This enables them to get nearer to the edge of the tree canopy to get fruit or cross to another tree. Climate changes around 11 to 12 million years ago affected forests in East and Central Africa so that there were periods when openings prevented travel through the tree canopy, and at these times ancestral hominids could have adapted the upright walking behaviour for ground travel. It is suggested that the ancestors of s and s became more specialised in climbing vertical tree trunks or lianas, using a bent hip and bent knee posture which matches the knuckle-walking posture they use for ground travel. Humans are closely related to these apes, and share features including wrist bones apparently strengthened for knuckle walking. [cite web |url=http://www.bbc.co.uk/sn/prehistoric_life/human/human_evolution/mother_of_man1.shtml |title=BBC - Science & Nature - The evolution of man |accessdate=2007-11-01 |work=Mother of man - 3.2 million years ago ] [cite web |url=http://www.liv.ac.uk/premog/premog-sup-info-SCIENCE.htm |title=PREMOG - Supplementary Info |accessdate=2007-11-01 |author= Thorpe S.K.S.|authorlink= |coauthors=Holder R.L., and Crompton R.H. |date= |work=Origin of Human Bipedalism As an Adaptation for Locomotion on Flexible Branches |publisher=Primate Evolution & Morphology Group (PREMOG), the Department of Human Anatomy and Cell Biology, the School of Biomedical Sciences at the |quote=Based on computer simulations of the mechanics of motion in fossil human ancestors such as the famous 'Lucy' skeleton, our research group has long argued that early human ancestors would have walked upright, rather than semi-crouched, as the old 'up from the apes' view has suggested ... Now, research on the orangutan, suggests that upright walking may have been a basic element of the lifestyle of the earliest ancestors of modern apes, including humans, which would have been tree-dwelling specialists on ripe fruit, living among the fine branches of tropical forest trees.]

Most species of "Australopithecus" were not any more adept at tool use than modern non-human primates, yet modern African apes, chimpanzees, and most recently s, have been known to use simple tools (i.e. cracking open nuts with stones and using long sticks to dig for s in mounds), and chimpanzees have been observed using spears (not thrown) for hunting.However, some have argued that "A. garhi" used stone tools due to a loose association of this species and butchered animal remains.