Homo erectus (from the Latin ērĭgĕre, "to put up, set upright") is an extinct species of hominid that lived from the end of the Pliocene epoch to the later Pleistocene, about 1.8 to 1.3 million years ago. The species originated in Africa and spread as far as India, China and Java.[1][2] There is still disagreement on the subject of the classification, ancestry, and progeny of H. erectus, with two major alternative hypotheses: erectus may be another name for Homo ergaster, and therefore the direct ancestor of later hominids such as Homo heidelbergensis, Homo neanderthalensis, and Homo sapiens; or it may be an Asian species distinct from African ergaster.[1][3][4]

The first theory is that H. erectus migrated from Africa during the Early Pleistocene, possibly as a result of the operation of the Saharan pump, around 2.0 million years ago, and dispersed throughout much of the Old World. Fossilized remains 1.8 to 1 million years old have been found in Africa (e.g., Lake Turkana[5] and Olduvai Gorge), Europe (Georgia and Spain), Indonesia (e.g., Sangiran and Trinil), Vietnam, China (e.g., Shaanxi) and India.[6]

The second theory is H. erectus evolved in Asia and then migrated to Africa. The species occupied a West Asian site called Dmanisi, in Georgia, from 1.85 million to 1.77 million years ago, at the same time or slightly before the earliest evidence in Africa. Excavations found 73 stone tools for cutting and chopping and 34 bone fragments from unidentified creatures.[7][8] 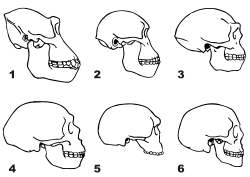 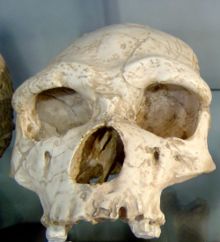 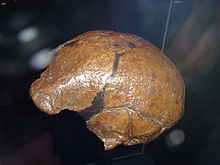 The Dutch anatomist Eugene Dubois, who was fascinated especially by Darwin's theory of evolution as applied to man, set out to Asia (the place accepted then, despite Darwin, as the cradle of human evolution), to find a human ancestor in 1886. In 1891, his team discovered a human fossil on the island of Java, Indonesia; he described the species as Pithecanthropus erectus (from the Greek πίθηκος[9], "ape", and ἄνθρωπος[10], "man"), based on a calotte (skullcap) and a femur like that of H. sapiens found from the bank of the Solo River at Trinil, in East Java. (This species is now regarded as Homo erectus.)

The find became known as Java Man. Thanks to Canadian anatomist Davidson Black's (1921) initial description of a lower molar, which was dubbed Sinanthropus pekinensis[11], however, most of the early and spectacular discoveries of this taxon took place at Zhoukoudian in China. German anatomist Franz Weidenreich provided much of the detailed description of this material in several monographs published in the journal Palaeontologica Sinica (Series D).

Nearly all of the original specimens were lost during World War II; however, authentic Weidenreichian casts do exist at the American Museum of Natural History in New York and at the Institute of Vertebrate Paleontology and Paleoanthropology in Beijing, and are considered to be reliable evidence.

Throughout much of the 20th century, anthropologists debated the role of H. erectus in human evolution. Early in the century, however, due to discoveries on Java and at Zhoukoudian, it was believed that modern humans first evolved in Asia. A few naturalists (Charles Darwin most prominent among them) predicted that humans' earliest ancestors were African: he pointed out that chimpanzees and gorillas, who are human relatives, live only in Africa.[12]

From 1950s to 1970s, however, numerous fossil finds from East Africa yielded evidence that the oldest hominins originated there. It is now believed that H. erectus is a descendant of earlier genera such as Ardipithecus and Australopithecus, or early Homo-species such as H. habilis or H. ergaster. H. habilis and H. erectus coexisted for several thousand years, and may represent separate lineages of a common ancestor.[13]

The skull of Tchadanthropus uxoris, discovered in 1961 by Yves Coppens in Chad, is the earlier fossil human discovered in Africa.[14] This fossil "had been so eroded by wind-blown sand that it mimicked the appearance of an australopith, a primitive type of hominid".[15] Though some first considered it to be a specimen of H. habilis[16], it is no longer considered to be a valid taxon, and scholars rather consider it to represent H. erectus.[14][17]

Many paleoanthropologists still debate the definition of H. erectus and H. ergaster as separate species. Several scholars suggested to drop the taxon Homo erectus, and suggested instead to equate Homo erectus with archaic Homo sapiens[18][19][20][21][22] Some call H. ergaster the direct African ancestor of H. erectus, proposing that it emigrated out of Africa and migrated into Asia, branching into a distinct species.[23] Most dispense with the species-name ergaster, making no distinction between such fossils as the Turkana Boy and Peking Man.[citation needed] Though "Homo ergaster" has gained some acceptance as a valid taxon, these two are still usually defined as distinct African and Asian populations of the larger species H. erectus. 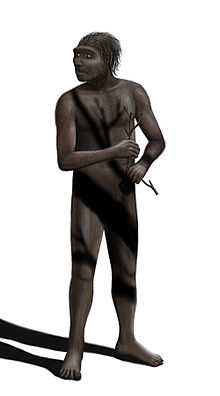 Reconstruction of how Homo Erectus may have looked

Reconstruction based on evidence from the Daka Member, Ethiopia

While some have argued (and insisted) that Ernst Mayr's biological species definition cannot be used here to test the above hypotheses, one can, however, examine the amount of morphological cranial variation within known H. erectus / H. ergaster specimens, and compare it to what one sees in disparate extant groups of primates with similar geographical distribution or close evolutionary relationship. Thus, if the amount of variation between H. erectus and H. ergaster is greater than what one sees within a species of, say, macaques, then H. erectus and H. ergaster may be considered two different species.

The extant model of comparison is very important, and selecting appropriate species can be difficult. (For example, the morphological variation among the global population of H. sapiens is incredibly small, as attested by the Mitochondrial Eve hypothesis,[24][25] and our own special diversity may not be a trustworthy comparison.) Another closely related, and possibly ancestral, species is Homo georgicus: fossils examples of this species were found in Dmanisi in the Republic of Georgia, and are considered to display traits intermediate between H. erectus and H. habilis. 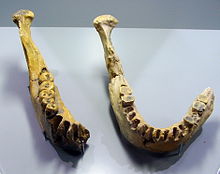 Replica of lower jaws of Homo erectus from Tautavel, France

H. erectus had a cranial capacity greater than that of Homo habilis (although the Dmanisi specimens have distinctively small crania): the earliest remains show a cranial capacity of 850 cm³, while the latest Javan specimens measure up to 1100 cm³,[26] overlapping that of H. sapiens.; the frontal bone is less sloped and the dental arcade smaller than the australopithecines'; the face is more orthognatic (less protrusive) than either the australopithecines' or H. habilis's, with large brow-ridges and less prominent zygomata (cheekbones). These early hominins stood about 1.79 m (5 ft 10 in), and were more robust than modern humans.[27]

The sexual dimorphism between males and females was slightly greater than seen in H. sapiens, with males being about 25% larger than females. However, their dimorphism is drastically lesser than that of the earlier Australopithecus genus. The discovery of the skeleton KNM-WT 15000, "Turkana boy" (Homo ergaster), made near Lake Turkana, Kenya by Richard Leakey and Kamoya Kimeu in 1984, is one of the most complete hominid-skeletons discovered, and has contributed greatly to the interpretation of human physiological evolution.

For the remainder of this article, the name Homo erectus will be used to describe a distinct species for the convenience of continuity.

Homo ergaster used more diverse and sophisticated stone tools than its predecessors: H. erectus, however, used comparatively primitive tools. This is possibly because H. ergaster first used tools of Oldowan technology and later progressed to the Acheulean:[28] while the use of Acheulean tools began ca. 1.8 million years ago, the line of H. erectus diverged some 200,000 years before the general innovation of Acheulean technology. Thus the Asian migratory descendants of H. ergaster made no use of any Acheulean technology. In addition, it has been suggested that H. erectus may have been the first hominid to use rafts to travel over oceans.[29]

Sites in Europe and Asia seem to indicate controlled use of fire by H. erectus, some dating back 1.5 million years ago. A presentation at the Paleoanthropology Society annual meeting in Montreal, Canada in March 2004 stated that there is evidence for controlled fires in excavations in northern Israel from about 690,000 to 790,000 years ago. A site called Terra Amata, located on the French Riviera, which lies on an ancient beach, seems to have been occupied by H. erectus; it contains the earliest evidence of controlled fire, dated at around 300,000 years BC. Excavations dating from approximately 790,000 years ago in Israel suggest that H. erectus not only controlled fire but could light fires.[30] Despite these examples, some scholars continue to assert that the controlled use of fire was not typical of H. erectus, but only of later species of Homo, such as H. heidelbergensis, H. neanderthalensis, and H. sapiens). 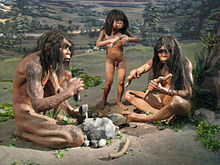 A diorama in National Museum of Indonesia, Jakarta, depicting the life size model of stone equipped hunter, a Homo erectus family living in Sangiran about 900,000 years ago.

Homo erectus was probably the first hominid to live in a hunter-gatherer society, and anthropologists such as Richard Leakey believe that it was socially more like modern humans than the more Australopithecus-like species before it. Likewise, increased cranial capacity generally coincides with the more sophisticated tools occasionally found with fossils.

The discovery of Turkana boy (H. ergaster) in 1984 gave evidence that, despite its Homo-sapiens-like anatomy, it may not have been capable of producing sounds comparable to modern human speech. Ergaster likely communicated in a proto-language lacking the fully developed structure of modern human language but more developed than the non-verbal communication used by chimpanzees.[31] Such inference has been challenged by the discovery of H. ergaster/erectus vertebrae some 150,000 years older than the Turkana Boy in Dmanisi, Georgia, that reflect vocal capabilities within the range of H. sapiens.[32] Both brain-size and the presence of the Broca's area also support the use of articulate language.[33]

There has been some debate as to whether H. erectus, and possibly the later Neanderthals[35] may have interbred with anatomically modern humans in Europe and Asia. See Neanderthal admixture theory.[36]

Homo erectus remains one of the most successful and long-lived species of Homo. As a distinct Asian species, however, no consensus has been reached as to whether it is ancestral to H. sapiens or any later hominids.

The discovery of Homo floresiensis in 2003 and of the recentness of its extinction has raised the possibility that numerous descendant species of Homo erectus may have existed in the islands of Southeast Asia and await fossil discovery (see Orang Pendek). Homo erectus soloensis, who lived on Java at least as late as about 50,000 years ago, would be one of them. Some scientists are skeptical of the claim that Homo floresiensis is a descendant of Homo erectus. One explanation holds that the fossils are of a modern human with microcephaly, while another one holds that they are from a group of pygmys. Some of the major Homo erectus fossils: