The frontal bone is a bone in the human skull that resembles a cockleshell in form, and consists of two portions:[1]

The frontal bone is presumed to be derived from neural crest cells.[2]

The border of the squama frontalis is thick, strongly serrated, bevelled at the expense of the inner table above, where it rests upon the parietal bones, and at the expense of the outer table on either side, where it receives the lateral pressure of those bones; this border is continued below into a triangular, rough surface, which articulates with the great wing of the sphenoid. The posterior borders of the orbital plates are thin and serrated, and articulate with the small wings of the sphenoid. [1] 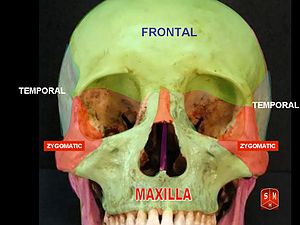 In most vertebrates, the frontal bone is paired, rather than presenting the single, fused structure found in humans. It typically lies on the upper part of the head, between the eyes, but in many non-mammalian animals it does not form part of the orbital cavity. Instead, in reptiles, bony fish and amphibians it is often separated from the orbits by one or two additional bones not found in mammals. These bones, the prefrontals and postfrontals, together form the upper margin of the eye sockets, and lie to either side of the frontal bones.[3]