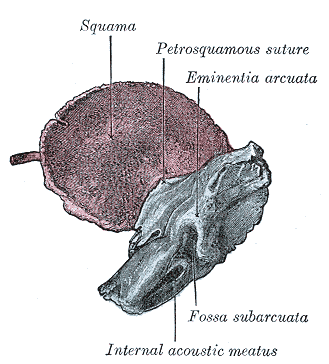 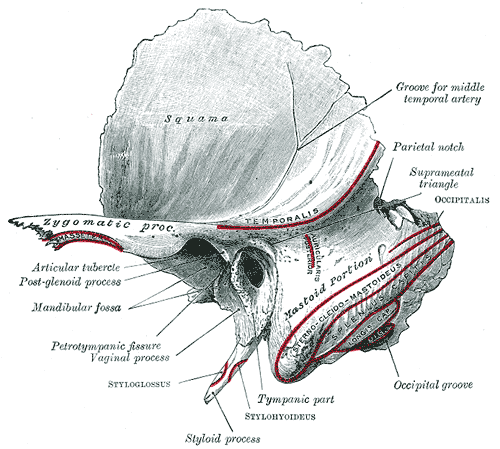 Caption2 = Left . Outer surface. (Squama is visible at top left.)
System =
MeshName =
MeshNumber =
The squama of the forms the anterior and upper part of the bone, and is scale-like, thin, and translucent.

Its outer surface is smooth and ; it affords attachment to the , and forms part of the ; on its hinder part is a vertical groove for the middle . A curved line, the "temporal line", or "supramastoid crest", runs backward and upward across its posterior part; it serves for the attachment of the temporal , and limits the origin of the temporalis muscle. The boundary between the squama and the mastoid portion of the bone, as indicated by traces of the original suture, lies about 1 cm. below this line.

Projecting from the lower part of the squama is a long, arched process, the "zygomatic process". This process is at first directed lateralward, its two surfaces looking upward and downward; it then appears as if twisted inward upon itself, and runs forward, its surfaces now looking medialward and lateralward. The superior border is long, thin, and sharp, and serves for the attachment of the temporal fascia; the inferior, short, thick, and arched, has attached to it some fibers of the . The lateral surface is convex and ; the medial is , and affords attachment to the masseter. The anterior end is deeply serrated and articulates with the . The posterior end is connected to the squama by two roots, the anterior and posterior roots. The posterior root, a prolongation of the upper border, is strongly marked; it runs backward above the , and is continuous with the temporal line. The anterior root, continuous with the lower border, is short but broad and strong; it is directed medialward and ends in a rounded eminence, the (eminentia articularis).

This tubercle forms the front boundary of the , and in the fresh state is covered with cartilage. In front of the articular tubercle is a small triangular area which assists in forming the ; this area is separated from the outer surface of the squama by a ridge which is continuous behind with the anterior root of the zygomatic process, and in front, in the articulated skull, with the on the great wing of the sphenoid. Between the posterior wall of the and the posterior root of the zygomatic process is the area called the suprameatal triangle (Macewen), or , through which an instrument may be pushed into the .

The leads into the or ; it lodges the anterior process of the , and transmits the tympanic branch of the . The nerve passes through a canal (canal of ), separated from the anterior edge of the petrotympanic fissure by a thin scale of bone and situated on the lateral side of the , in the retiring angle between the squama and the petrous portion of the temporal.

The internal surface of the squama is concave; it presents depressions corresponding to the convolutions of the temporal lobe of the brain, and grooves for the branches of the middle s.

The superior border is thin, and bevelled at the expense of the internal table, so as to overlap the squamous border of the , forming with it the squamosal suture. Posteriorly, the superior border forms an angle, the parietal notch, with the mastoid portion of the bone.

The antero-inferior border is thick, serrated, and bevelled at the expense of the inner table above and of the outer below, for articulation with the great wing of the .