The sphenoid bone (from Greek sphenoeides, "wedgelike") is an unpaired bone situated at the base of the skull in front of the temporal bone and basilar part of the occipital bone. The sphenoid bone is one of the seven bones that articulate to form the orbit. Its shape somewhat resembles that of a butterfly or bat with its wings extended.

It is divided into the following parts:

Two sphenoidal conchae are situated at the anterior and posterior part of the body. 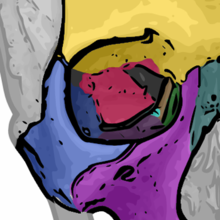 Seven bones articulate to form the orbit. The sphenoid bone is one of them, labeled with pink

The sphenoid bone of humans is homologous with a number of bones that are often separate in other animals, and have a somewhat complex arrangement.

In the early lobe-finned fishes and tetrapods, the pterygoid bones were flat, wing-like bones forming the major part of the roof of the mouth. Above the pterygoids were the epipterygoid bones, which formed part of a flexible joint between the braincase and the palatal region, as well as extending a vertical bar of bone towards the roof of the skull. Between the pterygoids lay an elongated, narrow parasphenoid bone, which also spread over some of the lower surface of the braincase, and connected, at its forward end, with a sphenethmoid bone helping to protect the olfactory nerves. Finally, the basisphenoid bone formed part of the floor of the braincase and lay immediately above the parasphenoid.[1]

Aside from the loss of the flexible joint at the rear of the palate, this primitive pattern is broadly retained in reptiles, albeit with some individual modifications. In birds, the epipterygoids are absent and the pterygoids considerably reduced. Living amphibians have a relatively simplified skull in this region; a broad parasphenoid forms the floor of the braincase, the pterygoids are relatively small, and all other related bones except the sphenethmoid are absent.[1]

In mammals, these various bones are often (though not always) fused into a single structure; the sphenoid. The basisphenoid forms the posterior part of the base, while the pterygoid processes represent the pterygoid bones. The epipterygoids have extended into the wall of the cranium; they are referred to as alisphenoids when separate in mammals, and form the greater wings of the sphenoid when fused into a larger structure. The sphenethmoid bone forms as three bones: the lesser wings and the anterior part of the base. These two parts of the sphenethmoid may be distinguished as orbitosphenoids and presphenoid, respectively, although there is often some degree of fusion. Only the parasphenoid appears to be entirely absent in mammals.[1]