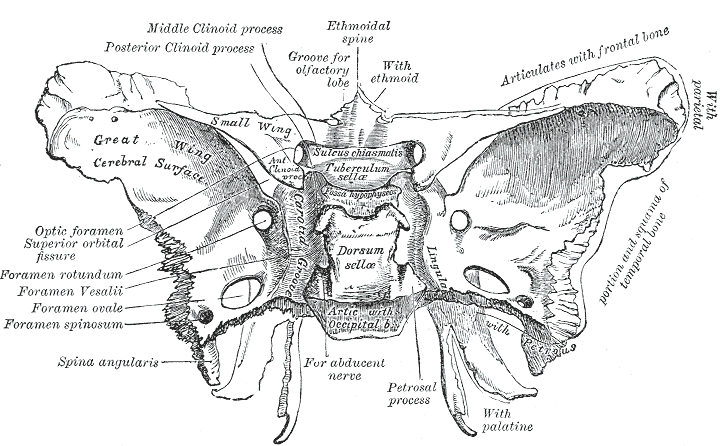 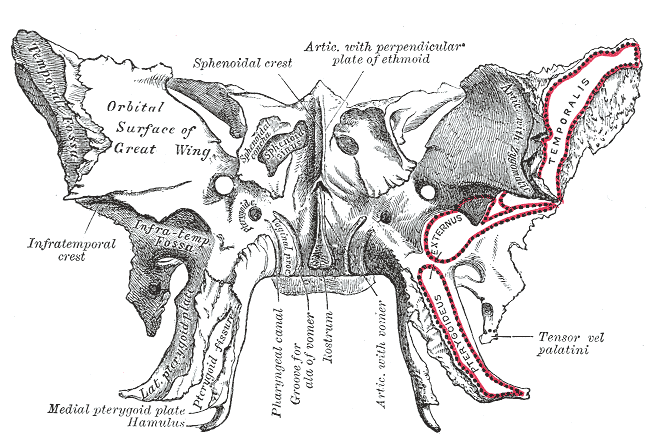 Caption2 = Figure 2: , anterior and inferior surfaces.
Width = 300
MusclesOrigins =
MusclesInsertions =
Articulations =
MeshName =
MeshNumber =
DorlandsPre = a_21
DorlandsSuf = 12118035
The greater wing of the sphenoid bone, or ali-sphenoid, is a bony process of the ; there is one on each side, extending from the side of the body of the sphenoid and curving upward, laterally, and backwards.

The greater wings of the sphenoid are two strong processes of bone, which arise from the sides of the body, and are curved upward, lateralward, and backward; the posterior part of each projects as a triangular process which fits into the angle between the squamous and the petrous part of the and presents at its apex a downwardly directed process, the .

The superior or cerebral surface of each greater wing [Fig. 1] forms part of the middle cranial fossa; it is deeply concave, and presents depressions for the convolutions of the of the brain. It has a number of foramina (holes) in it:
* The is a circular aperture at its anterior and medial part; it transmits the .
* The foramen ovale is behind and lateral to this; it transmits the , the , and sometimes the .
* The is occasionally present; it is a small aperture medial to the foramen ovale, opposite the root of the pterygoid process; it opens below near the , and transmits a small vein from the cavernous sinus.
* The , in the posterior angle near to and in front of the spine; it is a short canal which transmits the and a from the .

It is pierced by the and , and at its posterior part is the , which is frequently grooved on its medial surface for the .

To the sphenoidal spine are attached the and the muscle.

Medial to the anterior extremity of the infratemporal crest is a triangular process which serves to increase the attachment of the ; extending downward and medialward from this process on to the front part of the lateral pterygoid plate is a ridge which forms the anterior limit of the infratemporal surface, and, in the articulated skull, the posterior boundary of the .

The orbital surface of the great wing [Fig. 2] , smooth, and quadrilateral in shape, is directed forward and medially and forms the posterior part of the lateral wall of the orbit.
* Its upper serrated edge articulates with the orbital plate of the .
* Its inferior rounded border forms the postero-lateral boundary of the .
* Its medial sharp margin forms the lower boundary of the and has projecting from about its center a little tubercle which gives attachment to the inferior head of the muscle; at the upper part of this margin is a notch for the transmission of a recurrent branch of the .
* Its lateral margin is serrated and articulates with the .
* Below the medial end of the superior orbital fissure is a grooved surface, which forms the posterior wall of the , and is pierced by the .

Commencing from behind [Fig. 2] , that portion of the circumference of the great wing which extends from the body to the spine is irregular.
* Its "medial half" forms the anterior boundary of the , and presents the posterior aperture of the for the passage of the corresponding nerve and artery.

* Its "lateral half" articulates, by means of a , with the petrous portion of the temporal, and between the two bones on the under surface of the skull, is a furrow, the sulcus of the auditory tube, for the lodgement of the cartilaginous part of the .

In front of the spine the circumference presents a concave, serrated edge, bevelled at the expense of the inner table below, and of the outer table above, for articulation with the squamous part of the .

At the tip of the great wing is a triangular portion, bevelled at the expense of the internal surface, for articulation with the sphenoidal angle of the ; this region is named the .