East Java (Indonesian: Jawa Timur, Javanese: Jawa Wétan ) is a province of Indonesia. It is located on the eastern part of the island of Java and includes neighboring Madura and islands to its east (the Kangean and Sapudi groups) and to its north (Bawean and the Masalembu Islands. The provincial capital is Surabaya, the second largest city in Indonesia and a major industrial center and port.

According to the 2000 census, East Java has 34 million inhabitants, estimated to increase to 37.4 million in 2010,[3] making it the second most populous Indonesian province after West Java. The inhabitants are predominantly ethnically Javanese. Native minorities include migrants from nearby Madura, and distinct Javanese ethnicities such as the Tengger people in Bromo, the Samin and the Osing people in Banyuwangi. East Java also hosts a significant population of other ethnic groups, such as Chinese, Indians, and Arabs. In addition to the national language, Indonesian, they also speak Javanese. Javanese as spoken in the western East Java is a similar dialect to the one spoken in nearby Central Java, with its hierarchy of high, medium, and low registers. In the eastern cities of Surabaya, Malang, and surrounding areas, a more egalitarian version of Javanese is spoken, with less regard for hierarchy and a richer vocabulary for vulgarity.

Hinduism and Buddhism once dominated the island, however, with the arrival of Islam, Hinduism was gradually pushed out in the 14th and 15th century (see the spread of Islam in Indonesia). The last nobles and loyalists of the fallen empire of Majapahit fled from this point to Bali. Islam spread from northern cities in Java where traders from Gujarat, India brought with them Islam. The eastern part of East Java, from Surabaya to Pasuruan, and the cities along the coast, and back to Banyuwangi to Jember, is known as the "horseshoe area" in context with earlier Muslim communities living there.[citation needed]

East Java is administratively divided into 29 regencies (or kabupaten), together with 9 cities (or kotamadya) that are independent of the regency in which they sit.

East Java's history dates back to the famous ancient kingdoms of Kediri and Singosari, which is now a city near Malang. The Majapahit empire, centered at Trowulan, Mojokerto East Java, is celebrated by Indonesians as the golden age of the archipelago. The Eastern Java region was part of the Mataram Kingdom during its peak. 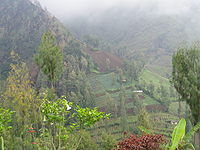 Farming in East Java in the foothills near Mount Bromo.

East Java will build 4 seaports by 2013 in Lamongan, Gresik, Probolinggo and Banyuwangi.[4]

East Java hosts some of the famous universities in Indonesia, both owned by government and private. Three major cities for universities, because they have government's universities, are Surabaya, Malang, and Jember. Among them, Airlangga University and Institut Teknologi Sepuluh Nopember are the most famous, and both are located in Surabaya. See: List of universities in East Java

Another important form of education that is available in most cities in East Java is the pesantren. This kind of education is built and organized by Islamic clerics, and associated with local or national Muslim organizations. Jombang is a famous city for its pesantren.

East Java supports several regional media outlets. Local newspapers with provincial news reach their readers earlier than their competitors from Jakarta. In the spirit of "providing more news from around readers", most newspapers even issue municipal sections which are different among their distribution areas.

Based on the survey conducted between August 2010 and January 2011, East Java included 11 of the top 20 cities and regencies of the Local economic governance which measures nine parameters: [5]

East Java cuisine tends to be saltier than that of Central Java.