Impression of the cylinder seal of Ḫašḫamer, ensi (high priest) of Sin at Iškun-Sin ca. 2100 BC. The seated figure is probably king Ur-Nammu, bestowing the governorship on Ḫašḫamer, who is led before him by a lamma (protective goddess). Sin/Nanna himself is present in the form of a crescent. 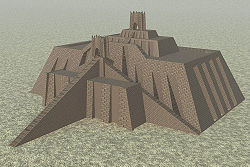 Reconstruction of the Ziggurat of Ur, the main shrine to Nanna, based on the 1939 reconstruction by Leonard Woolley (Ur Excavations vol. V, fig. 1.4)

Sin (Akkadian: Su'en, Sîn) or Nanna (Sumerian: DŠEŠ.KI, DNANNA) was the god of the moon in Mesopotamian mythology. Nanna is a Sumerian deity, the son of Enlil and Ninlil, and became identified with Semitic Sin. The two chief seats of Nanna's/Sin's worship were Ur in the south of Mesopotamia and Harran in the north.

The original meaning of the name Nanna is unknown. The earliest spelling found in Ur and Uruk is DLAK-32.NA (where NA is to be understood as a phonetic complement). The name of Ur, spelled LAK-32.UNUGKI=URIM2KI, is itself derived from the theonym, and means "the abode (UNUG) of Nanna (LAK-32)".

The pre-classical sign LAK-32 later collapses with ŠEŠ (the ideogram for "brother"), and the classical Sumerian spelling is DŠEŠ.KI, with the phonetic reading na-an-na. The technical term for the crescent moon could also refer to the deity, DU4.SAKAR. Later, the name is spelled logographically as DNANNA.

The Semitic moon god Su'en/Sin is in origin a separate deity from Sumerian Nanna, but from the Akkadian Empire period the two undergo syncretization and are identified. The occasional Assyrian spelling of DNANNA-ar DSu'en-e is due to association with Akkadian na-an-na-ru "illuminator, lamp", an epitheton of the moon god. The name of the Assyrian moon god Su'en/Sîn is usually spelled as DEN.ZU, or simply with the numeral 30, DXXX.[1]

He is commonly designated as En-zu, which means "lord of wisdom". During the period (c.2600-2400 BC) that Ur exercised a large measure of supremacy over the Euphrates valley, Sin was naturally regarded as the head of the pantheon. It is to this period that we must trace such designations of Sin as "father of the gods", "chief of the gods", "creator of all things", and the like. The "wisdom" personified by the moon-god is likewise an expression of the science of astronomy or the practice of astrology, in which the observation of the moon's phases is an important factor.

His wife was Ningal ("Great Lady"), who bore him Utu/Shamash ("Sun") and Inanna/Ishtar (the goddess of the planet Venus). The tendency to centralize the powers of the universe leads to the establishment of the doctrine of a triad consisting of Sin/Nanna and his children.

Sin had a beard made of lapis lazuli and rode on a winged bull. The bull was one of his symbols, through his father, Enlil, "Bull of Heaven", along with the crescent and the tripod (which may be a lamp-stand). On cylinder seals, he is represented as an old man with a flowing beard and the crescent symbol. In the astral-theological system he is represented by the number 30 and the moon. This number probably refers to the average number of days (correctly around 29.53) in a lunar month, as measured between successive new moons.

An important Sumerian text ("Enlil and Ninlil")[2] tells of the descent of Enlil and Ninlil, pregnant with Nanna/Suen, into the underworld. There, three "substitutions" are given to allow the ascent of Nanna/Suen. The story shows some similarities to the text known as "The Descent of Inanna".

Nanna's chief sanctuary at Ur was named E-gish-shir-gal ("house of the great light"). It was at Ur that the role of the En Priestess developed. This was an extremely powerful role held by a princess, most notably Enheduanna, daughter of King Sargon of Akkad, and was the primary cult role associated with the cult of Nanna/Sin.[3]

Sin also had a sanctuary at Harran, named E-khul-khul ("house of joys"). The cult of the moon-god spread to other centers, so that temples to him are found in all the large cities of Babylonia and Assyria. A sanctuary for Sin with Syriac inscriptions invoking his name dating to the 2nd and 3rd centuries CE was found at Sumatar Harabesi in the Tektek mountains, not far from Harran and Edessa.