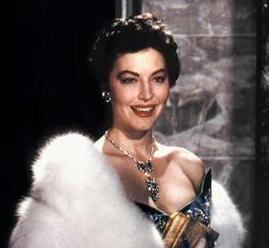 Ava Lavinia Gardner (, – , ) was an -nominated American actress. She is listed as one of the 's greatest stars of all time.

Ava Gardner was born in 1922 in the small community farming community of also known as , near Smithfield, N.C., the youngest of seven children (she had two brothers; Raymond and Melvin, and four sisters; Beatrice, Elsie Mae, Inez and Myra) of poor and farmers; her mother, Molly, was a of and English descent, while her father, Jonas Bailey Gardner, was a Catholic of and American Indian (Tuscarora) descent. When the children were still young, the Gardners lost their property, forcing Jonas Gardner to work at a sawmill and Molly to begin working as a cook and housekeeper at a dormitory for teachers at the nearby Brogden School.

When Gardner was thirteen years old, the family decided to try their luck in a bigger town, , where Molly Gardner found work managing a boardinghouse for the city's many shipworkers. That job did not last long, and the family moved to the Rock Ridge suburb of Wilson, North Carolina, where Molly Gardner ran another boarding house. Gardner's father died of bronchitis in 1935. Gardner and some of her siblings attended high school in Rock Ridge and she graduated from there in 1939. She then attended secretarial classes at Atlantic Christian College in Wilson for about a year.

Gardner, who by age eighteen had become a stunning, green-eyed brunette, was visiting her sister Beatrice in New York in 1941 when Beatrice's husband Larry Tarr, a professional photographer, offered to take her portrait. He was so pleased with the results that he displayed the finished product in the front window of his Tarr Photography Studio on Fifth Avenue.

In 1941, a legal clerk, Barnard "Barney" Duhan, spotted Gardner's photo in Tarr's studio. At the time, Duhan often posed as an MGM talent scout to meet girls, using the fact that MGM was a subsidiary of Loews. Duhan entered Tarr's and tried to get Gardner's number, but was rebuffed by the receptionist. Duhan made the offhand comment, "Somebody should send her info to MGM", and the Tarrs did so immediately. Shortly after, Gardner, who at the time was a student at Atlantic Christian College, traveled to New York to be interviewed at MGM's New York office. She was offered a standard contract by MGM, and left school for Hollywood in 1941 with her sister Bappie accompanying her. MGM's first order of business was to provide her a voice coach, as her Carolina drawl was nearly incomprehensible. [Cannon, Dorris Rollins, "Grabtown Girl: Ava Gardner's North Carolina Childhood and Her Enduring Ties to Home" ISBN 1-878086-89-8]

Gardner was nominated for an Academy Award for "" (1953); however she lost to for "Roman Holiday". Many thought Gardner's finest performance was as Maxine Faulk in "The Night of the Iguana" (1964), for which she was not nominated. (, as the repressed Judith Fellowes, however, was nominated in the Best Supporting Actress category).

"Off-camera, she gave off sparks of wit, as in her assessment of , who directed her in "Mogambo": 'The meanest man on earth. Thoroughly evil. Adored him!'" [ [http://www.washingtonpost.com/wp-dyn/content/article/2006/06/29/AR2006062901477.html] "Movie Stars: The odd and amazing careers of Ava Gardner, Barbra Streisand, Patricia Neal and Ed Sullivan", short reviews by Dennis Drabelle, Washington Post Book World,Sunday, , ; Page BW08, "One Woman Riot" section, reviewing Lee Server's "Ava Gardner: 'Love Is Nothing'"]

She moved to , England in 1968, undergoing a to allay her worries of contracting the that had killed her mother. That year she made what some consider to be one of her best films, a Technicolor, English-language remake of "Mayerling", in which she played the Austrian Empress Elisabeth opposite as Emperor Franz Joseph.

Soon after her arrival in , Gardner met fellow MGM contract player ; they married on , in , California. She was 19 years old. Gardner made several movies before 1946, but it wasn't until she starred in "The Killers" opposite , that she became known as a movie star and . (Rooney and Gardner divorced in 1943, mainly because Rooney wouldn't give up his partying ways). Rooney later rhapsodized about Gardner's performance in bed, though upon hearing this Gardner retorted "Well, honey, he may have enjoyed the sex, but [goodness knows] I didn't." She once characterised their marriage as "".

Her second marriage was to jazz musician and band leader , from 1945 to 1946 and it was even more disastrous than the first. It was during this marriage that Gardner began to drink and take refuge in therapy.

Her third and last marriage (1951-1957) was to singer and actor . Sinatra left his wife, Nancy, for Ava and their subsequent marriage made headlines. Sinatra was savaged by gossip columnists and , the Hollywood establishment, and by his fans for leaving his "good wife" for this exotic "femme fatale". His career suffered, while Gardner's prospered -- the headlines only solidified her sexy screen siren image. The marriage to Sinatra was stormy -- passionate fighting, jealousy, at least one suicide attempt (by Sinatra), and numerous separations.

Gardner used her considerable clout to get Sinatra cast in his Oscar-winning role in "" (1953). That role and the award revitalized both Sinatra's acting and singing careers. Gardner said of her relationship with Sinatra, "We were great in bed. It was usually on the way to the bidet when the trouble began." (This quote inspired the song "Frank and Ava" by .) During their marriage Gardner became pregnant, but she had an abortion due to the volatility of her marriage. She had always wanted children, but she said years later, "We couldn't even take care of ourselves. How were we going to take care of a baby?" Gardner and Sinatra remained good friends for the rest of her life.

She began dating billionaire aviator in the early to mid-1940s, a relationship that lasted into the 1950s.

She Sinatra in 1957 and headed to where her friendship with famed writer led to her becoming a fan of bullfighting and bullfighters such as (who was currently with China Machado), with whom she had a tempestuous affair. "It was a sort of madness, honey", she said later of the time.

After a lifetime of smoking, Gardner suffered from , in addition to an autoimmune disorder (which may have been ). After two in 1986, which left her partially paralyzed and bedridden, Frank Sinatra paid the cost of her ($50,000) medical expenses. Her last words (to her housekeeper Carmen), were, "I'm so tired", before she died of pneumonia at the age of 67. After her death, one of Frank Sinatra's daughters found him slumped in his room, crying, and unable to speak. Gardner was not only the love of his life but also the inspiration for one of his most personal and magical songs, "I'm a Fool to Want You", recorded after their separation. Reportedly, a lone black limousine parked behind the crowd of 500 mourners at Ava's funeral. No one exited the vehicle, but it was assumed that the anonymous mourner was indeed Frank Sinatra. A floral arrangement at Gardner's graveside simply read: "With My Love, Francis".