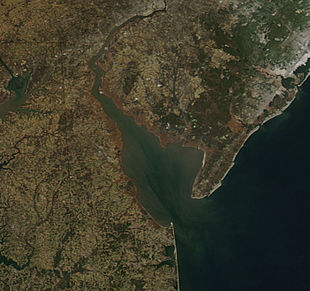 Delaware Bay is a major estuary outlet of the Delaware River on the Northeast seaboard of the United States whose fresh water mixes for many miles with the waters of the Atlantic Ocean. It is 782 square miles (2,030 km2) in area.[1] The bay is bordered by the State of New Jersey and the State of Delaware. It was the first site classified in the Western Hemisphere Shorebird Reserve Network.

The pair of Delaware Capes that denote the outermost boundary of the Bay with the Atlantic are Cape Henlopen and Cape May. The Cape May-Lewes Ferry crosses the Delaware Bay from Cape May, New Jersey, to Lewes, Delaware. Management of ports along the bay is the responsibility of the Delaware River and Bay Authority. 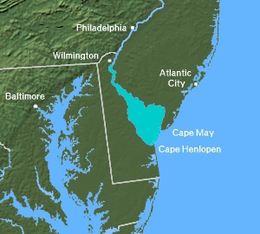 The shores of the bay are largely composed of salt marshes and mud flats, with only small communities inhabiting the shore of the lower bay. Besides the Delaware, it is fed by numerous smaller streams. The rivers on the Delaware side include (from north to south): the Christina River, the Appoquinimink River, the Leipsic River, the Smyrna River, the St. Jones River, and the Murderkill River. Rivers on the New Jersey side include the Salem River, Cohansey River, and the Maurice River. Several of the rivers hold protected status for the unique salt marsh wetlands along the shore of the bay. The bay serves as a breeding ground for many aquatic species, including horseshoe crabs. The bay is also a prime oystering ground. 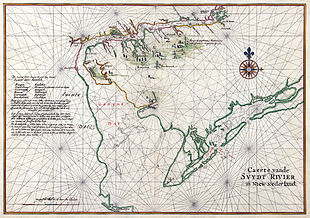 At the time of the arrival of the Europeans in the 17th century, the area around the bay was inhabited by the Lenape. The Indian name for the bay was Poutaxat. The river they called Lenape Wihittuck, which means "the rapid stream of the Lenape". The first recorded European visit to the bay was by Henry Hudson, who claimed it for the Dutch East India Company in 1609. The dutch called the estuary Gogdijn's Bay (sometimes Godyn's Bay) after a director of the company, Samuel Godijn. As part of the New Netherland colony, the dutch established several settlements (the most famous being Zwaanendael) on the shores of the bay and explored its coast extensively. The thin nature of the corporate colony's presence in the bay and along what was called the South River (now the Delaware) made it possible for Peter Minuit, the former governor of New Netherland, to establish a competing Swedish sponsored settlement, New Sweden in 1638. The resulting dispute with the dutch colonial authorities in New Amsterdam (New York City) was settled when Peter Stuyvesant led a dutch military force into the area in 1655. After the British took title to the New Netherland colony in 1667 at the Treaty of Breda the bay came into their possession and was renamed with the river Delaware, after the first Governor of Virginia Thomas West, 3rd Baron De La Warr. The native American tribe living along the bay and river were later called the Delaware by the Europeans due to their location. The U.S. state also takes its name from the bay and the river.

Conflicting crown grants were made to the James, Duke of York and William Penn on the west bank of the bay and river. Settlement grew rapidly, leading Philadelphia, upriver on the Delaware, to become the largest city in North America in the 18th century. In 1782 during the American Revolutionary War, Continental Navy Lieutenant Joshua Barney fought with a British squadron within the bay. Barney's force of three sloops defeated a Royal Navy frigate, a sloop-of-war and a Loyalist privateer.

The strategic importance of the bay was noticed by the Marquis de Lafayette during the American Revolutionary War, who proposed the use of Pea Patch Island at the head of the bay for a defensive fortification to protect the important ports Philadelphia and New Castle, Delaware. Fort Delaware was later constructed on Pea Patch Island. During the American Civil War it was used as a Union prison camp. 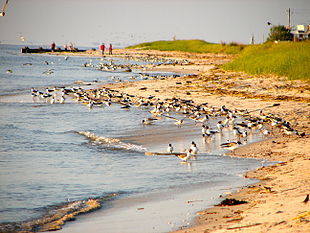 The shore on Cape May, near the Atlantic Ocean

In 1855, the United States government systematically undertook the formation of a 26 ft (7.9 m) channel 600 ft (180 m) wide from Philadelphia to deep water in Delaware Bay. The Rivers and Harbors Act of 1899 provided for a 30-foot (9.1 m) channel 600 feet (180 m) wide from Philadelphia to the deep water of the bay. The bay today is one of the most important navigational channels in the United States, and is the second busiest waterway in the United States after the Mississippi River. Its lower course forms part of the Intracoastal Waterway. The need for direct navigation around the two capes into the ocean is circumvented by the Cape May Canal and the Lewes and Rehoboth Canal at the north and south capes respectively. The upper bay is also connected directly to the north end of Chesapeake Bay by the Chesapeake and Delaware Canal. For boaters using the bay, the bay offers several challenges. First, there is a significant current of up to three knots which has the effect of giving a boost or slowing you. Second, the bay is for the most part shallow and the channel is often occupied with ocean-going vessels. When wind is in opposition to the current, it quickly builds a very nasty chop. Finally, it does not offer many places where you can take shelter.