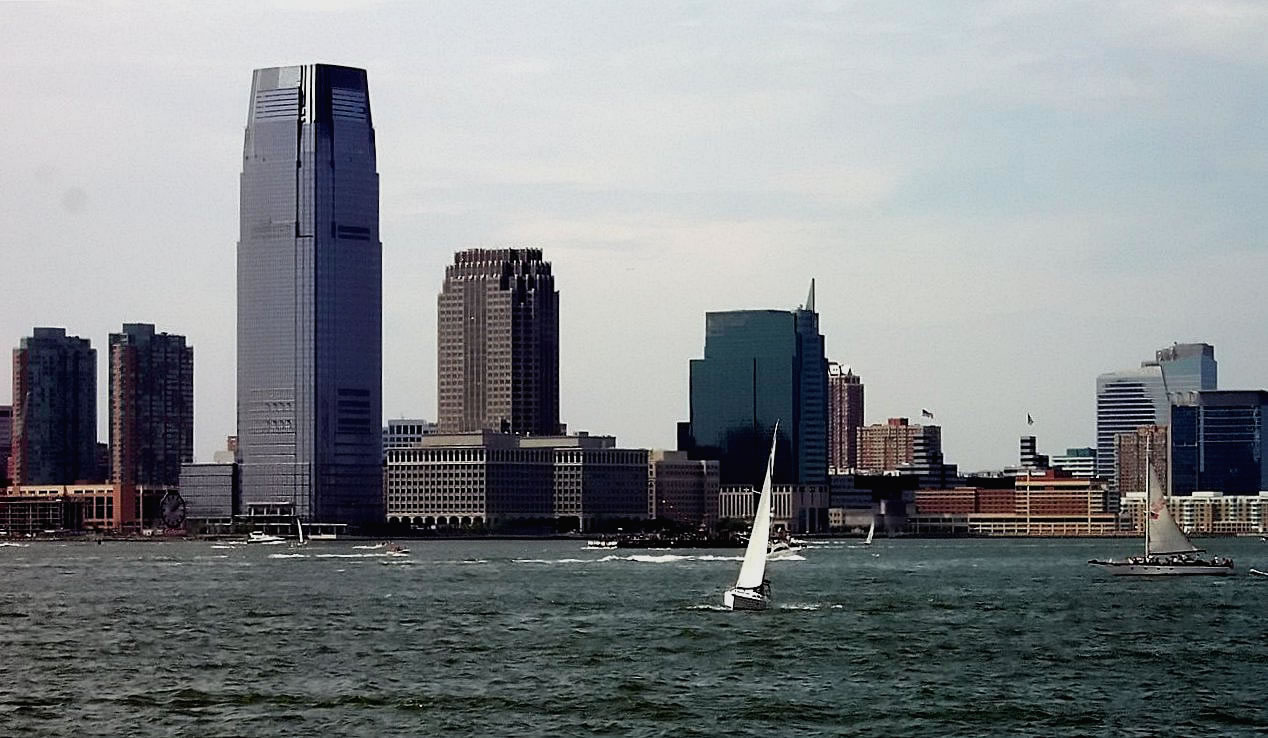 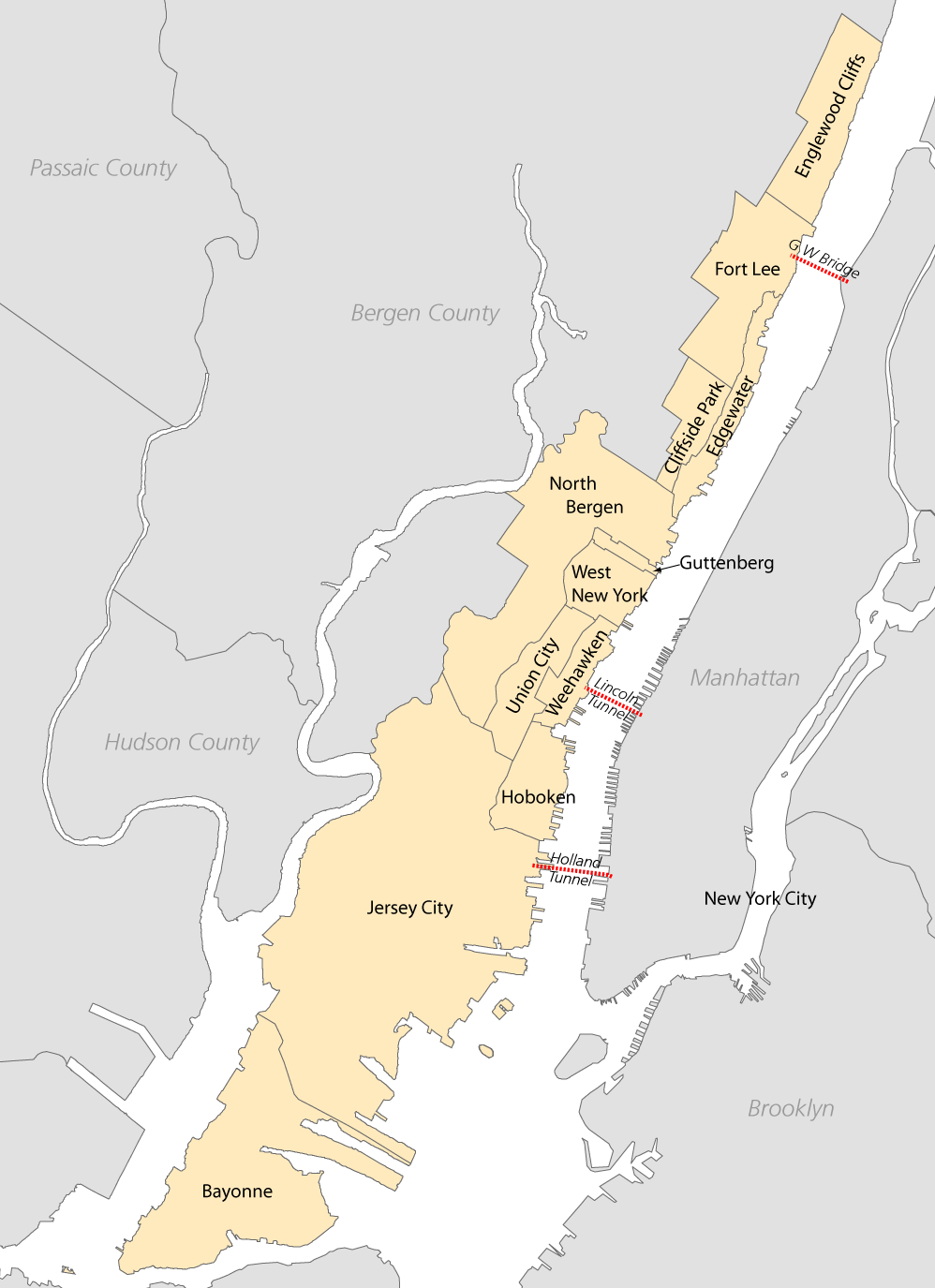 |right|thumb|300px
subdivision_type = Counties
subdivision_name = Hudson and Bergen
area_magnitude = 1 E8
area_total_km2 = 137.529
area_land_km2 = 95.571
area_water_km2 = 41.958
area_total_sq_mi =
area_land_sq_mi =
area_water_sq_mi =
area_water_percent =
population_as_of = 2000
population_total = 606221
population_density_km2 = 16428.8
population_density_sq_mi = 42550.6
timezone = Eastern
utc_offset = -5
timezone_DST = Eastern
utc_offset_DST = -4
's Gold Coast consists of a string of communities on the west bank of the , across from in Hudson and Bergen counties. The term is a relatively new one and was coined by real estate agents, brokers, and developers in the 1980s who realized the investment potential of the area. It is infrequently, if ever, used outside the context of real-estate sales and marketing.

A more commonly used collective name is the Hudson Waterfront, or simply The Waterfront, or sometimes the "Jersey waterfront", or farther north, "the Palisades". (The New Jersey Department of Tourism considers it to be part of the state's .) Physically it is the Bayonne Peninsula, lying between the Hudson and the . Most residents just refer to the town or neighborhood, and occasionally the name of the development, where they live or work. This may have to do with the fact that though this geographically long narrow region is a contiguous urban area (where it's often difficult to know when one's crossed a civic boundary), each of the municipalities has its own government and school district, with which the citizens identify. Few people travel very far along its length to work, school, or to shop or socialize, more often heading east to New York City or further west into New Jersey.

Part of the , the area has a population of approximately 600,000. and is made up of the following communities (from south to north):

During the latter half of the 19th and early part of the 20th centuries, the region experienced intense growth, due largely to the many railroad terminals and maritime facilities built there and to the extensive immigration to the USA, especially via , which is in its waters. Before the construction, 1910, of the 's under the Hudson, railroads terminated on the west bank of the river, requiring passengers and cargo to travel by ferry or barge to . This development of ports in Jersey City, Bayonne, Hoboken, and Weehawken resulted in intense industrial and residential development in the area.

and the construction of tunnels and bridges into Manhattan, coupled with the growing preference for road travel over railroads or boats, spelled the end of the railroads and ports. Most of the ports along the Hudson and were shut down, while nearly all the railroad terminals closed. The only remaining railroad terminal currently in operation along the Gold Coast is , which serves as a terminus for many commuter trains. As much of the capital and wealth fled the region after , the area experienced a major downturn, which lasted through to the late-1990s.

Today, it is primarily made up of established urban communities that were commercial/industrial in nature throughout the 20th century, though some areas were high-density bedroom communities. The area is currently experiencing intensive economic development, consisting largely of high-density residential buildings, office towers, and retail centers. Some of this development is on s that were once factories, warehouses, docks, and rail yards. Existing housing stock, made up mostly of high-density detached homes, old s/s and converted industrial spaces, has been revitalized &mdash; particularly in areas near to public transportation corridors. Additionally, the area is seeing new residential development, in the form of single-family housing, multi-family apartments, and condominiums. Today, the Gold Coast has some of the most valuable real estate in the state.

The Gold Coast communities are very urban and have some of the highest residential densities in the United States. However, the communities remain fragmented, due in part to New Jersey's long history of home rule local government. Within these communities exist distinct neighborhoods and shopping districts, formed in part due to isolation caused by Hudson River inlets, the cliffs of the and rail lines.

* Hoboken Division: Main Line (to Suffern, and in partnership with MTA/, express service to Port Jervis), , and , all via (where transfer is possible to ); and (both via Newark ); (limited service as via to Long Branch and Bay Head); (limited service via );
*:serving Bayonne, , Jersey City's West Side, downtown Jersey City, , Hoboken's western perimeter, the Weehawken waterfront, Bergenline and Tonnelle Avenues.
*PATH: 24-hour subway service from Hoboken Terminal (HOB) and downtown Jersey City and Journal Square (JSQ) to midtown Manhattan (33rd) (along 6th Ave to Herald Square/), the (WTC), and (NWK).

* ferry service, from Jersey City, Hoboken and Weehawken to and / in lower Manhattan, and to West 39th in midtown Manhattan, where free transfer is available to a variety of "loop" buses.

* (EWR) is closest airport in New Jersey with scheduled passenger service
* (LGA) is in
* (JFK) is on in
*, in the , serves private and corporate planes

*If the Gold Coast were incorporated into one city, it would be the twenty-first most populated in the country and would still have the smallest land area of the most populous fifty. The only city in the Gold Coast that is on the most populated hundred cities in the United States is Jersey City at sixty-six. [http://www.uscensus US Census]
*Of municipalities with over 50,000 people, is the most densely populated in the United States. [ [http://www.demographia.com/db-2000city50kdens.htm 2000 Census: US Municipalities Over 50,000: Ranked by 2000 Density] , accessed , ]
*The most densely populated town in the country, is in the Gold Coast.Fact|date=February 2007
*North Bergen is the city with the second most hills per square mile in the United States behind San Francisco.