North Bergen is a township in Hudson County, New Jersey, United States. As of the United States 2010 Census, the township had a total population of 60,773. Originally founded in 1843, the town was much diminished in territory by a series of secessions. Situated on the Hudson Palisades, it is one of the "hilliest" municipalities in the United States. Like neighboring North Hudson communities is among those places in the nation with one of the highest population densities and a majority Hispanic population.

North Bergen is roughly shaped like an inverted "L". It northern section stretches east-west and is south of Bergen County. It's north-south section lies between Secaucus to the west and Guttenberg, West New York, and Union City, which with it meets Jersey City at a single point at its southern end.

North Bergen has a diverse geological features. Partially situated on the North River (Hudson River), the Hudson Palisades rise from the waterfront, while the northern part of the town sits atop the plataeu. The cuesta, or slope, on the west side of area makes North Bergen the city with the second most hills per square mile in the United States after San Francisco,[7] some of which are extremely steep. A rock formation along the slope (located at 40°48′27″N 74°01′05″W﻿ / ﻿40.8075°N 74.01806°W﻿ / 40.8075; -74.01806) is composed of unusual serpentinite rock and made up of small rock cliffs. Because of this, it is one of the few undeveloped parts of North Bergen. Low-lying areas along the west side are part of the New Jersey Meadowlands. The unusual shape and diverse topography of North Bergen have create a diverse historical and contemporary neighborhoods. 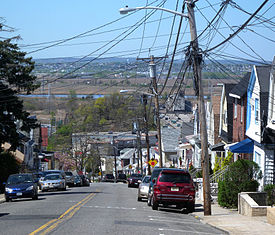 On the western slope overlooking the Meadowlands

Woodcliff Treatment Plant at the foot of the Palisades

At the time of European colonization the area was the territory of Hackensack tribe of the Lenape,[10] who maintained a settlement, Espatingh, on the west side of the hills.,[11][12][13] and where a Dutch trading post was established after the Peach Tree War.[14] In 1658, Peter Stuyvesant, then Director-General of New Netherland, re-purchased from them the area now encompassed by the municipalities of Hudson County east of the Hackensack River. In 1660 he granted permission to establish the semi-autonomous colony of Bergen, with the main village located at today's Bergen Square, considered to be the first chartered municipality in what would became the state of New Jersey.[15] At the time the area of North Bergen was heavily forested, traversed by paths used by the indigenous and colonializing population and became known as Bergen Woods, a name recalled in today's neighborhood. After the 1664 surrender of Fort Amsterdam the entire New Netherland colony came into the possession of the British, who established the Province of New Jersey. In 1682, the East Jersey legislature created Bergen County, consisting of all the land in the peninsula between the Hackensack and Hudson Rivers; that is, the eastern portions of what today is Bergen and Hudson Counties. In 1693, Bergen County was divided into two townships: Hackensack Township in the north, and Bergen Township, encompassing the Bergen Neck peninsula, in the south. The border between the two townships is the current Hudson-Bergen county line.[16][17] While settlement was sparse, communities developed along the Bergen Turnpike at the Three Pigeons and Maisland, later New Durham. French botanist André Michaux developed his gardens nearby. On the North River (Hudson River), Bulls Ferry became an important landing for crossings to Manhattan. While ostensibly under British control during the American Revolutionary War, the area was patrolled by the Americans on foraging, espionage, and raiding expeditions.[18][19]

In 1838, Jersey City was re-incorporated as separate municipality, and in 1840 Hudson County, comprising the city and Bergen Township, was created from the southern portion of Bergen County.[18][20] North Bergen was incorporated as a township on April 10, 1843, by an Act of the New Jersey Legislature, from the northern portion of Bergen Township. At the time, the town included everything east of the Hackensack River and north of what is now Jersey City.[21][22] The entire region which is now known as North Hudson experienced massive immigration and urbanization during the latter half of the 19th century, and led to the creation of various new towns. Portions of the North Bergen were taken to form Hoboken Township (April 9, 1849, now the City of Hoboken), Hudson Town (April 12, 1852, later part of Hudson City), Hudson City (April 11, 1855, later merged with Jersey City), Guttenberg (formed within the township on March 9, 1859, and set off as an independent municipality on April 1, 1878), Weehawken (March 15, 1859), Union Township and West Hoboken Township (both created on February 28, 1861), Union Hill town (March 29, 1864) and Secaucus (March 12, 1900).[23] During this era many of Hudson County's cemeteries were developed along the town's western slope of the Hudson Palisades. At their foot in the Meadowlands the Erie, the New York, Susquehanna and Western, and the West Shore railroads ran right-of-ways to their terminals on the Hudson, the last building its tunnel through Bergen Hill at North Bergen.[24] The area was important destination during peak German immigration to the United States, and is recalled today in Schuetzen Park, founded in 1874. Further north, the Guttenburg Racetrack became a notable and notorious destination which after its closing became a proving ground for new technologies, the automobile and the airplane.[25][26][27][28][29][30] 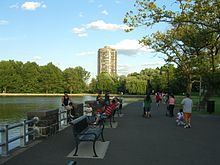 The development of Hudson County Boulevard, now known by its two sections which meet in North Hudson Park, Kennedy Boulevard and Boulevard East, was completed in the early 20th century,and by 1913 it was considered to be fine for "motoring".[31] Residential districts along and between the boulevards were developed.[32][33] Bergenline Avenue, a broad street which accommodated the North Hudson County Railway streetcars[34] to Nungesser's became (and remains) an important commercial and transit corridor. In 1935, in one of the most stunning upsets in boxing history, local hero James J. Braddock won the world heavyweight championship. A resident of the town until his death, the county park is now named for him. Soon after the opening of the Lincoln Tunnel Approach, the Susquehanna Transfer was built to accommodate passengers who wished to transfer to buses through the tunnel. At the time of its construction in 1949 the WOR TV Tower, in the midst the residential Woodcliff Section,[35] was the tenth tallest man-made structure in the world.[36] In the early 1960s two notable paleontological finds of fossils from the Newark Basin were made near the foot of the cliffs at one of several former quarries, the Granton, of which today's avenue is a namsake.[37][38][39] The former quarry remained an archeological site until at least 1980.[40] In contrast to other Hudson County towns during the latter half of the century, North Bergen grew significantly in population. Many residents are part of the wave of Spanish language speakers which had begun in the 1960s with Cuban émigrés, leading to the moniker Havanna on the Hudson for the North Hudson area.[41][42]

The township is a suburb of New York City, where about 21% of the township's employed residents work.

North Bergen has several retail districts, along Bergenline Avenue, Tonnelle Avenue, and near Transfer Station. It is a state-established "Urban Enterprise Zone", implemented through a program designed to assist businesses in communities across New Jersey. Businesses within the zone are eligible for a variety of incentives, including a sales tax reduction to customers of 3½% (from the mandated 7% statewide sales tax), with no tax on clothing or on purchases made by merchants related to running their businesses. Revenue generated from the reduced sales tax is maintained in a special fund dedicated for use within the zone for specific economic development and physical improvement projects.[44] The zone was established in February 1995 through the efforts of Senator Sacco, one of the sponsors of legislation creating the zones.[45]

The Vitamin Shoppe is headquartered in North Bergen.[46] Hudson News and Liz Claiborne are large employers.[47] 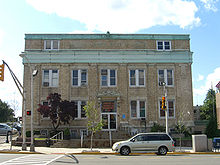 North Bergen is governed under the Walsh Act form of New Jersey municipal government since 1931.[48] The government consists of five commissioners elected at large to the Township Committee in non-partisan elections to serve four-year terms of office on a concurrent basis. After each election, the commissioners select one of their members to serve as mayor and each individual is assigned to head one of the five commissions.[1]

Members of the North Bergen Township Committee are[49]:

North Bergen is in the Hudson County Board of Chosen Freeholders District 8.[52] The Hudson County Executive, elected at-large, is Thomas A. DeGise.[53]Freeholder District 8, compromised of North Bergen, the North End of Secaucus and northernmost tip of Jersey City near Transfer Station.[54] is represented by Thomas Liggio.[55][56]

The North Bergen Police Force was founded in 1923, replacing the peace force known as "roundsmen".[57] North Bergen's fire department merged with those of neighboring communities in 1999 to form North Hudson Regional Fire and Rescue (NHRFR).[58] Seven are located in town.[citation needed]. NHRFR and North Bergen Emergency Medical Services (headquartered at 63rd St. and Granton Ave) were among the many Hudson County agencies that responded to the January 2009 crash of Flight 1549, as did Palisades Medical Center, where 57 of the survivors were treated for injuries.[59][60]

North Bergen is also home to A Step Ahead Preschool, a private pre-K through kindergarten school established in 1993.[63][64] 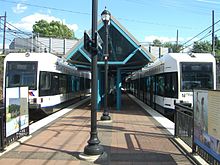 Public transportation in North Bergen is provided by bus and light rail service.

Bus service is provided along busy north-south corridors on Kennedy Boulevard, Bergenline Avenue, and Boulevard East by New Jersey Transit and privately operated guagua (minibus) within Hudson County, and to Bergen County and Manhattan, New York City. Nungessers is a major orgination and transfer point. Lines terminating at Port Authority Bus Terminal in Midtown Manhattan are the 121, 125, 127, 128, 154, 156, 158, 159, 165, 166, 168, 320 routes. The 181 and 188 lines terminate at George Washington Bridge Bus Terminal in Upper Manhattan. Lines 22, 23, 83, 84, 85, 86, 88 and 89 terminate either at Journal Square or Hoboken Terminal. The 751 travels to Edgewater and Hackensack.[65]

Route 495 travels between the Lincoln Tunnel and the New Jersey Turnpike with interchanges for Route 3 and U.S. Route 1/9, which runs north-south on the western edge side of town.

North Bergen is located within the New York media market, with most of its daily papers available for sale or delivery. The Jersey Journal is a local daily paper based in Jersey City. Local weeklies include the free bilingual paper, Hudson Dispatch Weekly,[66](named for the former daily Hudson Dispatch),[67] North Bergen Reporter (part of the Hudson Reporter group of local weeklies), and the Spanish language El Especialito.[68] River View Observer is a monthly newspaper that covers the Hudson Waterfront market.

In the late 2000s, North Bergen, Weehawken, Union City and West New York came to be dubbed collectively as "NoHu", a North Hudson haven for local performing and fine artists, many of whom are immigrants from Latin America and other countries, in part due to lower housing costs compared to those in nearby art havens such as Hoboken, Jersey City and Manhattan.[69]