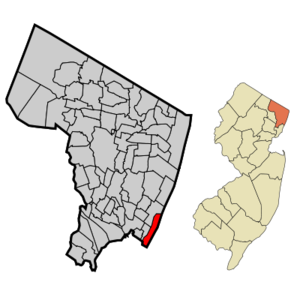 Edgewater was originally formed on , , from portions of Ridgefield Township as the Borough of Undercliff, at the height of the "" phenomenon then sweeping through Bergen County. The name was changed to Edgewater on , .

There were 3,836 households out of which 20.0% had children under the age of 18 living with them, 40.0% were married couples living together, 8.4% had a female householder with no husband present, and 48.6% were non-families. 39.1% of all households were made up of individuals and 6.3% had someone living alone who was 65 years of age or older. The average household size was 2.00 and the average family size was 2.70.

Edgewater is governed under the Borough form of New Jersey municipal government. The government consists of a Mayor and a Borough Council comprising six council members, with all positions elected at large. A Mayor is elected directly by the voters to a four-year term of office. The Borough Council consists of six members elected to serve three-year terms on a staggered basis, with two seats coming up for election each year.

In September 2008, the Independent Coalition for a Better Edgewater announced that it was withdrawing incumbent Beatrice Robbio newcomer Christina Zitis from the 2008 race, citing the difficulty of a third party to draw voter attention and get elected in a presidential-election year. [Firschein, Merry. [http://www.northjersey.com/news/northernnj/Two_Edgewater_council_candidates_pulled_from_race.html "Two Edgewater council candidates pulled from race"] , "", September 5, 2008. Accessed September 9, 2008.]

On Election Day, , , in the race for two three-year seats on the Borough Council, Democratic Party newcomer James Delaney (1,224 votes) obtained his first term on the Council, followed by Democratic incumbent Neda Rose (1,180) who earned her fifth term in office. Independent incumbent Valory Bardinas was in third (1,134), falling short in her bid for re-election to a third term, and fellow Independent Mary Hogan came in fourth (1,123) in her attempt for office after previously serving three terms on the Council. Delaney's victory gives the Democrats control of the Council by a 4-2 margin, breaking a 3-3 deadlock. [ [http://www.northjersey.com/page.php?qstr=eXJpcnk3ZjcxN2Y3dnFlZUVFeXkzJmZnYmVsN2Y3dnFlZUVFeXk3MDE2NzAx Edgewater election results] , "", , .] [ [http://www.northjersey.com/page.php?qstr=eXJpcnk3ZjcxN2Y3dnFlZUVFeXkyJmZnYmVsN2Y3dnFlZUVFeXk3MDEzODA4 Edgewater Election] , "", , .] [ [http://151.198.187.55/countyclerk/2006%20General/2006_General.pdf Bergen County 2006 General Election Results] , . Accessed , .]

On the local level, Edgewater has its own two-party system, split between the Democratic Party and the Independent Coalition for a Better Edgewater. The Republican Party has minimal presence and doesn't always run a slate in local elections. The perennial local political issue is managing growth.

The serves public school students in Kindergarten through sixth grade. [http://www.evgschool.org/ Eleanor Van Gelder School] ,the lone school in the district, had an enrollment of 421 students in the 2005-06 school year. [ [http://nces.ed.gov/ccd/schoolsearch/school_list.asp?Search=1&DistrictID=3404440 Data for the Edgewater Public Schools] , . Accessed , .]

For grades 7 - 12, public school students are sent to the as part of a . [ [http://www.leoniaschools.org/BOE/QA.html#enrollment Questions and Answers About Leonia Schools] , . Accessed , . "The district currently has 1730 students enrolled in three schools. Leonia is a receiving district for Edgewater students beginning in Grade 7."] Students attend [http://www.leoniaschools.org/lms/lms.htm Leonia Middle School] for grades 7 and 8 (a school with a total of 443 students in grades 6 - 8), and which has had 630 students in grades 9 - 12, all as of 2005-06. [ [http://nces.ed.gov/ccd/schoolsearch/school_list.asp?Search=1&DistrictID=3408520 Leonia Public Schools] , . Accessed , .]

The "Japantown" in Edgewater features, among other places of interest, a containing a which features products aimed at the market. Located in the building is a food court with stores such as Santou-ka Ramen and , with a sitting area with a view of the . The mall also features other business aimed at the Japanese consumer and those seeking Japanese products.

*"History of Bergen County, New Jersey, 1630-1923;" by "Westervelt, Frances A. (Frances Augusta), 1858-1942."
*"Municipal Incorporations of the State of New Jersey (according to Counties)" prepared by the Division of Local Government, Department of the Treasury (New Jersey); , .