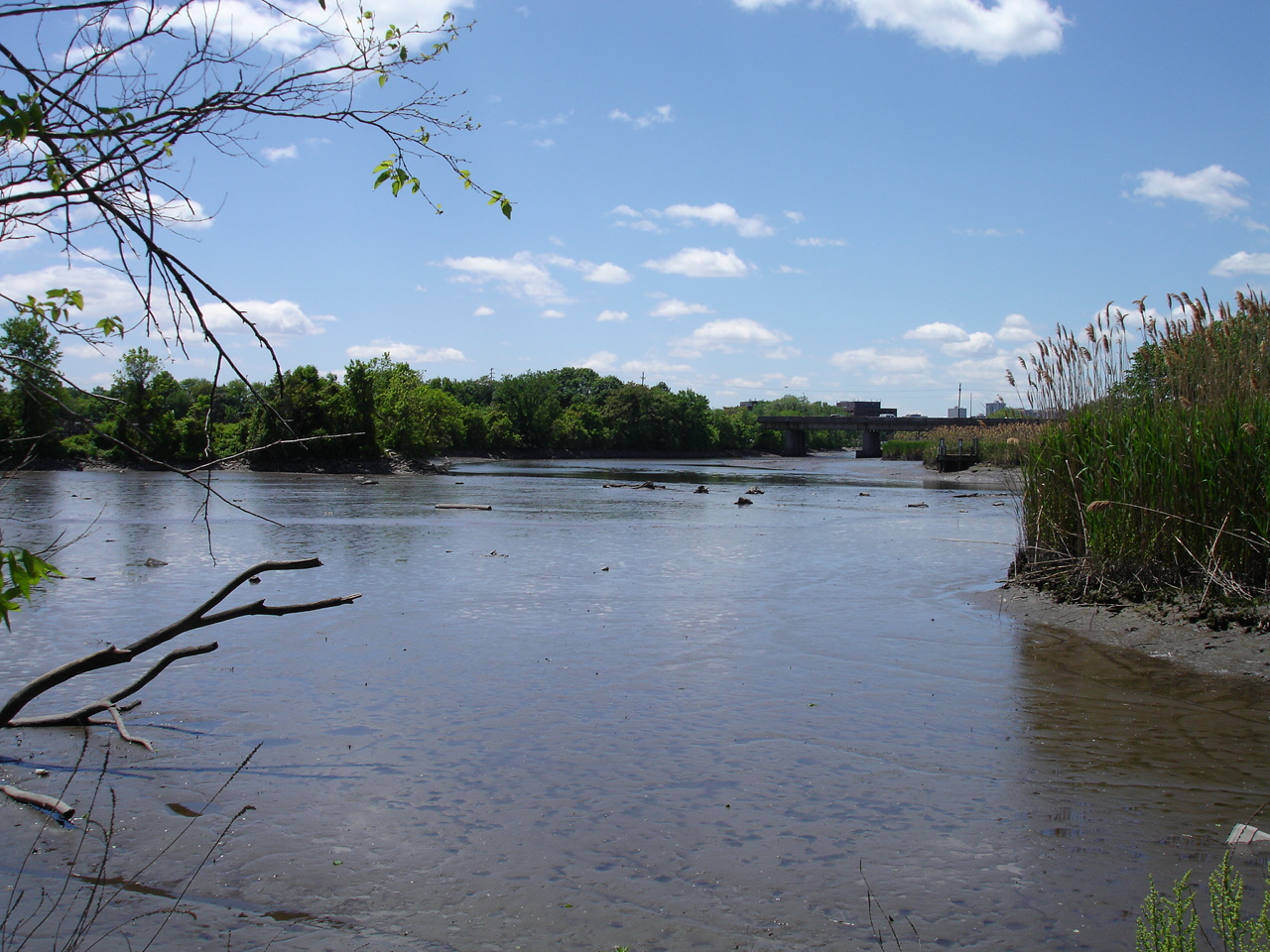 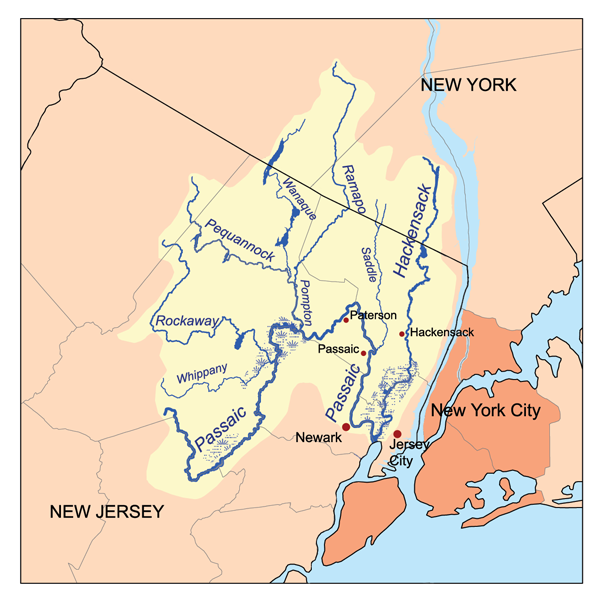 map_size = 300
map_caption = The Passaic and Hackensack watersheds The Hackensack River is a river, approximately 45 mi (72 km) long, in the s of and , emptying into , a back chamber of . The watershed of the river includes part of the suburban area outside just west of the lower , which it roughly parallels, separated from it by the . It also flows through and drains the . The lower river, which is navigable as far as the city of Hackensack, is heavily industrialized and forms a commercial extension of Newark Bay. Once believed to be the among the most polluted water courses in the United States, it is has staged a modest revival in recent decades. The river is sometimes affectionately nicknamed the "Hacky" for short.

The Hackensack River rises in southeastern New York, in Rockland County, just west of the and approximately 1 mi (1.6 km) south of West Haverstraw. It flows briefly southeast, into the reservoir, separated form the Hudson by less than 3 mi (5 km). South of the dam, it then flows south, diverging from the Hudson. Just across the New Jersey state line, in northern Bergen County, it is impounded to form the reservoir .

South of Lake Tappan, it flows in a ing course southward through the suburban communities of New Jersey. Near Oradell, it is impounded to form , where it is joined by several streams, including the and . , a man-made island and site of the , lies in this area. South of the reservoir, it flows past River Edge, Hackensack, Teaneck, and Ridgefield Park, once again approaching within 3 mi (5 km) of the Hudson, and separated from it by the ridge of the Palisades.

At Little Ferry, it is joined by the broad , then flows southward, widening in a broad meandering tidal through the Meadowlands, forming extensive side streams and s. South of North Bergen, it forms the boundary between Bergen County to the west and Hudson County to the east. Opposite Secaucus it is joined by , then flows past the western edge of Jersey City, which overlooks the river's valley from the ridge of the Palisades, before forming Newark Bay at its confluence with the between Jersey City and Kearny.

As it flows through the Meadowlands it is traversed by numerous rail and road bridges.

The name of the river comes from the Lenape word "Ackingsack", meaning "flat confluence of streams". Conflicts with the Lenape prevented the early Dutch settlers of the colony from expanding westward into the valley into late in the 17th century. The river furnished both the Native Americans and the an settlers with abundant runs of , and .

In the colonial era, the river and the surrounding Meadowlands presented a formidable difficulty in transportation and communication. The wetlands helped allow the escape of the under in 1776 after several defeats at the hands of the British army on the east side of the Hudson. It later served as a protective barrier that allowed Washington's army to encamp in the nearby hills near Morristown.

In the last two centuries, the river has suffered from extremely severe . The construction of the dam in 1921 essentially changed the lower river from a free-flowing stream into a brackish estuary, allowing the encroachment of marine species. By the 1960s, however, much of the lower river was essentially a turbid -less dead zone, with only the hardiest of species such as the able to survive in its waters. was once thought to be the most polluted stream in the United States.

The river has recovered somewhat in recent decades following the decline in manufacturing in the area, as well as from enforcement of such regulations as the and from the efforts of local conservancy groups. Recreational fishing has staged a modest comeback, despite continuing health advisories against the consumption of catch.