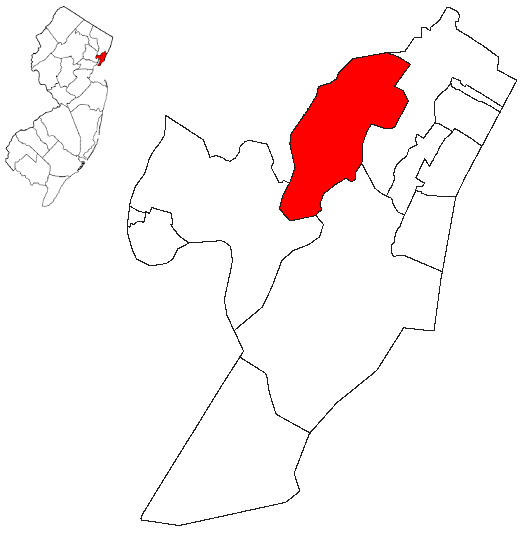 Secaucus is a town in Hudson County, , USA. As of the , the town population was 15,931. The town's name is pronounced "SEE-kaw-cus", with the accent on the first syllable, not the second as often used by non-natives. [Page, Jeffrey. [http://www.northjersey.com/page.php?qstr=eXJpcnk3ZjczN2Y3dnFlZUVFeXk2MzYmZmdiZWw3Zjd2cWVlRUV5eTY3MDkxMjkmeXJpcnk3ZjcxN2Y3dnFlZUVFeXk5 "Our towns challenge our tongues"] , "", , . Accessed , . "You can always tell newcomers to Secaucus. Because most words are pronounced with emphasis on the next-to-last syllable, they say they live in see-KAW-cus - although the ones who fear their friends might recall that Secaucus used to be pig-farming country might say they live in South Carlstadt, which doesn't exist. "If I said 'see-KAW-cus' to someone local, they'd think I didn't know what I was talking about," said Dan McDonough, the municipal historian. "Of course it's SEE-kaw-cus. Everybody knows that." ]

Secaucus was originally formed as a borough by an Act of the on , , from portions of North Bergen. On , , Secaucus was incorporated as a town, replacing Secaucus borough, based on the results of a referendum held on , .

Before the 1950s, Secaucus was home to a number of farms,

At the southern end of Secaucus is (officially known as Laurel Hill), an jutting up some convert|150|ft|m from the Meadowlands below, near the .

Being partly surrounded by the , Secaucus provides opportunities to observe the recovery of natural marshes in the town's post industrial, post agricultural age. Some marsh areas in the northeast part of town have been filled to provide a new commercial area, and some to build footpaths for nature walks with signs illustrating birds and other wildlife to be seen there.

There were 6,214 households out of which 25.7% had children under the age of 18 living with them, 49.2% were married couples living together, 10.7% had a female householder with no husband present, and 36.5% were non-families. 31.6% of all households were made up of individuals and 12.8% had someone living alone who was 65 years of age or older. The average household size was 2.41 and the average family size was 3.08.

Secaucus is currently home to men's soccer team [http://www.secaucusfc.com/ Secaucus FC] . Founded in 2001 by some of the first generation of soccer players from the town, Secaucus FC now represents the town in the [http://www.gssl.com/ Garden State Soccer League] , and several other tournaments and indoor leagues around the state. The team is the first ever men's soccer team to come out of Secaucus.

Secaucus has exceptionally good road and rail transportation. The town is divided into four by the intersecting roads of NJ 3, which runs east and west, and the eastern spur of the (part of Interstate 95), which runs north-south, with an interchange (16E/17) at NJ Route 3 and a new interchange 15X, near the Secaucus Junction Station , which opened in late 2005. [Harrington, Shannon D. [http://www.northjersey.com/page.php?qstr=eXJpcnk3ZjczN2Y3dnFlZUVFeXk2MDgmZmdiZWw3Zjd2cWVlRUV5eTY4MjgyNzQmeXJpcnk3ZjcxN2Y3dnFlZUVFeXky "Enter Exit 15"] , "", , . Accessed , . "Exit 15X, the new $250 million Secaucus interchange on the New Jersey Turnpike, will open to motorists Thursday night."]

Because of this, many shipping warehouses and truck freight transfer stations are located in Secaucus, both for shipping companies such as UPS and for numerous retailers. For example, 's "same day delivery" service to is run out of a warehouse in Secaucus. The town also has a large rail yard run by // where loads are switched between trains or transferred to or from trucks.

Secaucus is also the site of 's (also known as the Frank R. Lautenberg Station, and sometimes known as Secaucus Transfer Station or Allied Junction. Currently there is no track junction, although one is planned for the future). The transfer station links all of NJT's long-distance train lines except the and the . Access to the station from the rest of Secaucus is limited (it is in the southeast corner of Secaucus), via County Avenue or via NJ Turnpike Interchange 15X.

Numerous New Jersey Transit bus lines serve Secaucus, including the 124, 129, 190 and 320 buses to the in , the 78 to Newark, the 2 and 85 to Jersey City and local service provided on the 772 route. [ [http://www.njtransit.com/sf_tp_rc_hudson.shtml Hudson County Bus/Rail Connection] , . Accessed , .] There is a bus park-and-ride at the northeast corner of Secaucus.

In the first half of the 20th Century a trolley line ran through the then main business district of Secaucus, on from and across the to East Rutherford. The extent to which the will resurrect this service is undecided.

The closest airport with scheduled passenger service is in Newark / Elizabeth.

There are three taxicab services located within the town of Secaucus. Each taxicab service is licensed and inspected by the Secaucus Chief of Police and each individual driver of these licensed services undergo fingerprinting, motor vehicle record check and a complete background check each year.Fact|date=January 2008

There are several large retail areas in Secaucus.

Secaucus Plaza is the "downtown" area of Secaucus. It is just off of NJ-3. The Outlets are a collection of outlet shops selling discounted name-brand merchandise in southwest Secaucus.

The (officially, the Mall at Mill Creek) is a moderate-level mall on NJ-3 on the west side of the Turnpike. It's currently under renovation. The anchor store is still open.

and are located east of the NJ Turnpike, near NJ 3 and Interchange 16E.

Linen's n Things and Pier 1 are now open at .

*My Network TV's flagship station [ [http://www.my9ny.com/about-us/ About Us] , . Accessed , .] and are headquartered in Secaucus, as is of . The set to launch in 2009 will operate out of 's former studio in Secaucus. [ [http://www.sportsbusinessjournal.com/article/59727 MLB Network’s Harlem plans an unnecessary distraction] ]
*, purveyor of the famous brand of foods sold in many n countries and in the , is headquartered in Secaucus. [ [http://www.goya.com/english/about/contact_us.html Contact Us] , . Accessed , .]
*The holds its annual draft lottery in Secaucus. is produced from studios in Secaucus.
*The Japanese consumer electronics giant, Corporation of North America, has had its headquarters at One Panasonic Way in Secaucus since sometime in the 1980s.
*, a computer hardware dealer, has a warehouse in Secaucus.
* Secaucus is home to many datacenters including (formally an Allegiance Telecom facility), InterServer, Inc, [ [http://www.webhostgear.com/414.html InterServer Completes Construction of new convert|6000|sqft|m2|abbr=on. Datacenter] , accessed , .] and Datek (now owned by ) [ [http://www.allbusiness.com/technology/telecommunications/450544-1.html Daytek Online takes space in Secaucus, NJ Building] , accessed , .] located on Meadowlands Parkway, located on Enterprise Avenue, and located Hartz Way.
* Retail Stores, Inc. has its corporate headquarters in Secaucus. [Vernon, Joan. [http://www.accessmylibrary.com/coms2/summary_0286-8100032_ITM "Secaucus, N.J.-Based Children's Place Seeks to Convert Browsers into Buyers."] , "", , . Accessed , .]

Notable current and former residents include:
*, bodybuilder. [Hanc, John. [http://www.aarp.org/bulletin/yourhealth/lifting_for_life.html "Lifting for Life: Dave Draper, a 1960s bodybuilding star is back—and touting the rewards of strength building."] , "", October 2006. Accessed , . "Except the muscles: they were real. Draper had been developing those since he was 12, not on a West Coast beach but in the basement of his parents' home in Secaucus, N.J."]
*, pig farmer and frequent political candidate. [ [http://www.time.com/time/magazine/article/0,9171,816095,00.html Poor Man's Candidate] , "" , . "Massive (6 ft., 240 lbs.) Henry B. Krajewski of Secaucus, N.J. has a five-acre farm with 4,000 pigs, a flourishing saloon ("Tammany Hall Tavern") and political ambitions." ]

*Secaucus was mentioned by the on their first two singles, "" and "The New Style", on in the mid 1980s.Fact|date=August 2007
*Secaucus was frequently derided by various characters in the television sitcom, Will and Grace.
* Secaucus is mentioned as the place of origin of Clare Raymond, a 20th century woman thawed after being frozen for four centuries in "The Neutral Zone", the first season finale of "", which aired on , . [ [http://www.startrek.com/startrek/view/series/TNG/episode/68358.html "The Neutral Zone" at startrek.com] ]
* Some scenes of the film "Boiler Room" were shot at 150 Meadowlands Parkway.Fact|date=August 2007
* The killing of Chucky Signori in season 1, episode 13 of "" was filmed in Secaucus, at the docks below the two bridges of route 3
* A scene in "" episode of "" was filmed on Meadowlands Parkway near Route 3.Fact|date=August 2007
* Indie-rock band The Wrens recorded their album "Secaucus" in Secaucus.Fact|date=August 2007
* In a scene in "", when Tommy () tells a story about how he got in a fight with a cop in an interrogation room, he mentions that the cop picked him up when he was laying down in the weeds in Secaucus.
* The film "" is said to be the inspiration for the film "".Fact|date=January 2008
*Bruce Springsteen's 1984 video "Glory Days" was shot in Secaucus, and other locations in NJ including Maxwell's in Hoboken.Fact|date=January 2008
*Much of the music video for the band 's 1991 song “” was filmed at the Royal Motel on Rt. 3 West in Secaucus. The motel's illuminated sign is prominently shown throughout the video. The motel’s interior lot is also seen in the video.Fact|date=September 2008