Historical marker, located off Aviation Ave in the City of North Charleston

Michaux was born in Satory, now part of Versailles, Yvelines. After the death of his wife within a year of their marriage he took up the study of botany and was a student of Bernard de Jussieu. In 1779 he spent time studying botany in England, and in 1780 he explored Auvergne, the Pyrenees and northern Spain. In 1782 he was sent by the French government, as secretary to the French consul on a botanical mission to Persia. His journey began unfavourably, as he was robbed of all his equipment except his books; but he gained influential support in Persia after curing the shah of a dangerous illness. After two years he returned to France with a fine herbarium, and also introduced numerous Eastern plants into the botanic gardens of France. 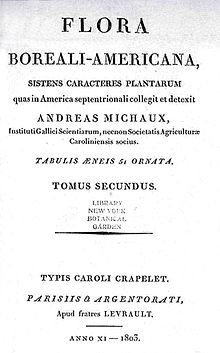 He was appointed by Louis XVI as botanist under the General Director of the Bâtiments du Roi and sent to the United States in 1785 with an annual salary of 2000 livres, to make the first organized investigation of plants that could be of value in French building and carpentry, medicine and pasture forage. He traveled with his son Francois André (1770–1855) through Canada, Nova Scotia and the United States. In 1786 he established and maintained for a decade, a Botanical Garden of 111 acres near what is now Aviation Avenue in North Charleston, South Carolina, from which he made many expeditions to various parts of North America, and another, of just under thirty acres, at Maisland in Bergen Township, New Jersey, on the Hudson Palisades across from New York, which was overseen by Pierre-Paul Saunier, from the Jardin des Plantes, Paris, who emigrated with Michaux.[1][2] Michaux described and named many North American species during this time. He collected ninety cases of plants and seeds to send back to France. At the same time he introduced many species to America from various parts of the world, including Camellia sasanqua, tea-olive, crepe myrtle, and ginkgo. His expeditions to Central Florida namely the Cape Canaveral area and Merritt Island is referenced on the Timeline Cape Canaveral. This is referenced by a letter from St. Augustine dated April 24, 1788 where he wrote and drew pictures of the big-flower paw-paw (Asimina obovata) and (Annona grandiflora Bartr). 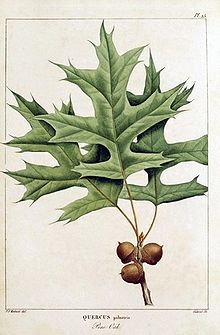 After the collapse of the French monarchy, André Michaux, who was a royal botanist, lost his source of income. He actively lobbied the American Philosophical Society to support his next exploration. His efforts paid off and, in early 1793, Thomas Jefferson asked him to undertake an expedition of westward exploration, similar to the Lewis and Clark Expedition, the Corps of Discovery, conducted by Meriwether Lewis and William Clark a decade later. At the time of the planned Michaux expedition, Lewis was an 18-year-old protégé of Jefferson who asked to be included in the expedition, and was turned down by Jefferson.

Before Michaux set out, however, he came under the influence of the French Minister to America, Edmond-Charles Genet. Genet was engaging in war-like acts against English and Spanish naval interests, aggravating relations between America, England and Spain. George Rogers Clark offered to organize and lead a militia to take over Louisiana territory from the Spanish. Michaux's mission was to evaluate Clark's plan and coordinate between Clark's actions and Genet's. Michaux went to Kentucky, but, without adequate funds, Clark was unable to raise the militia and the plan eventually folded. It is not true, as sometimes reported, that Thomas Jefferson ordered Michaux to leave the United States after he learned of his involvement with Genet. Though Jefferson did not support Genet's actions, he was aware of Genet's instructions for Michaux and even provided Michaux with letters of introduction to the Governor of Kentucky.[3]

On his return to France in 1796 he was shipwrecked, however most of his specimens survived. His two American gardens declined. Saunier, his salary unpaid, cultivated potatoes and hay and paid taxes on the New Jersey property, which is now still remembered as "The Frenchman's Garden", part of Machpelah Cemetery in North Bergen.

In 1800 Michaux sailed with Nicolas Baudin's expedition to Australia, but left the ship in Mauritius after quarreling with the captain. He then went to Madagascar to investigate the flora of that island, and died there of a tropical fever. His work as a botanist was chiefly done in the field, and he added largely to what was previously known of the botany of the East and of America.

In 1800, on his visit to the United States, Pierre Samuel Du Pont de Nemours, concerned about the abandoned botanical gardens, wrote to the Institut de France, who sent over Michaux's son François André Michaux to sell the properties. He sold the garden near Charleston in October, 1800, but the concern expressed by Du Pont and his brother Eleuthère Irénée du Pont preserved the New Jersey garden in Saunier's care and continued to support it. Saunier continued to send seeds to France for the rest of his life, and is credited with introducing into gardens the chinquapin (Castanea pumila) and the smoking bean tree (Catalpa bignonioides).[4]

The Carolina lily (Lilium michauxii), Michaux's Saxifrage (Saxifraga michauxii) and several other plants are named for him.

Michaux State Forest in Pennsylvania in the United States, which covers over 344 square kilometers (over 85,000 acres) is named for him.

He wrote two valuable works on North American plants: the Histoire des chênes de l'Amerique septentrionale (1801), with 36 plates, and the Flora Boreali-Americana (2 vols., 1803), with 51 plates. Although this 1803 work appeared to be the work of the father, François claimed some 15 years later that the work had been completed after his father's death and published posthumously by himself and another botanist.

His son Francois published an Histoire des arbres forestiers de l'Amerique septentrionale (3 vols., 1810–1813), with 156 plates, of which an English translation appeared in 1817-1819 as The North American Sylva. 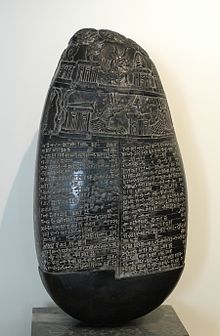 André Michaux is also known to have brought back from his eastern trip the boundary stone or kudurru. It was originally found by a French physician living in Baghdad and refers to a Babylonian town called Bak-da-du of the 12th century BC. On a small part of an embankment on the Tigris—near the Al-Karkh end of the Baab El-Maudham bridge—is an archeological site attributed to the second Babylonian period, circa 600 BC. Michaux sold the kudurru to the "Institute Constituting the Commission for Scientific Travel and the Custodians of the Museum of Antiquities in France in 1800, for 1200 francs. The 'Michaux stone' was deposited in the Bibliothèque Nationale (Cabinet des Médailles) at that time.

The standard author abbreviation Michx. is used to indicate this individual as the author when citing a botanical name.[5]