Auvergne (province)
This article is about the historical county and province of Auvergne. For the modern-day administrative région of Auvergne, see Auvergne (region).

Auvergne (French pronunciation: [ovɛʁɲ]; Occitan: Auvèrnhe/Auvèrnha) was a historic province in south central France. It was originally the feudal domain of the Counts of Auvergne. It is now the geographical and cultural area that corresponds to the former province. 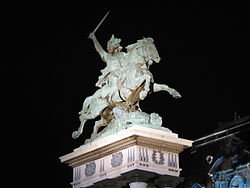 Statue of Vercingetorix in Clermont-Ferrand

Auvergne was a province of France deriving its name from the Arverni, a Gallic tribe who once occupied the area, well known for its fierce resistance, led by Vercingetorix, to conquest by the Roman Empire. Christianized by Saint Austremoine, Auvergne was quite prosperous during the Roman ages. After a short time under the Visigoths, it was conquered by the Franks, in 507. The medieval times were for Auvergne a period of great development, especially between the 10th and 13th centuries, with the building of famous abbeys and churches in a Romanesque style. In the year 1095, the historic Council of Clermont was held there, to rally support for the First Crusade. Its wide autonomy was ended by King Philippe-Auguste of France, who linked it to the royal possessions. Hardly impacted by the Hundred Years war, the religion wars and epidemics, integrated to the kingdom of France, it turned itself more and more into an agricultural province, although reputed for its products. In 1790, the historical province was divided into the modern-day départements of Puy-de-Dôme, Cantal, Haute-Loire, and Allier, although Haute-Loire and Allier also include some land from the historical provinces of Bourbonnais, Lyonnais, and Velay.

The region is famed for its charcuterie, which is celebrated in "La Mangona" festivals in many Auvergnat villages, for its cheeses (Saint Nectaire, Bleu d'Auvergne, Cantal, Salers, Fourme d'Ambert), and for its mineral waters (Volvic among others). Michelin tires are produced there. Auvergne is also the site of several major hydroelectric projects, mainly located on the Dordogne, Cère, and Truyère rivers. The region is also quite touristic, thanks to its landscapes.

Auvergnat, a variety of the Occitan language, was historically spoken in the Auvergne. It is still spoken there. Aubrac oxen, a rare breed, are raised in the Aubrac hills.[1]

The Auvergne emigrants, together with other Aveyron and Italian emigrants, deeply influenced the Parisian Bal-musette music.

Composer Joseph Canteloube based Songs of the Auvergne (Chants d'Auvergne) (1923–55), his well-known piece for voice and orchestra, on folk music and songs from the Auvergne.