Clermont-Ferrand (Auvergnat Occitan: Clarmont-Ferrand / Clarmont d'Auvèrnhe) is a city and commune of France, in the Auvergne region, with a population of 140,700 (2006). Its metropolitan area had 409,558 inhabitants at the 1999 census. It is the prefecture (capital) of the Puy-de-Dôme department. Serge Godard is the current Mayor of the city.

View of the city and the nearby Puy de Dome volcano

Clermont-Ferrand sits on the plain of Limagne in the Massif Central and is surrounded by a major industrial area. The city is famous for the chain of volcanoes, the Chaîne des Puys surrounding it. The famous dormant volcano Puy-de-Dôme (10 km from the city) is one of the highest of these and well known for the telecommunication antennas that sit on its top and are visible from far away.

Clermont-Ferrand is also famous for hosting one of the world's leading international festivals for short films, the Festival du Court Metrage de Clermont-Ferrand, as well as the corporate headquarters of Michelin, the global tire company created more than 100 years ago in the city.

Clermont-Ferrand's most famous public square is place de Jaude, on which stands a grand statue of Vercingetorix sitting imperiously on a horse and holding a glaive. The inscription reads: J'ai pris les armes pour la liberté de tous (English: I took up arms for the liberty of all). This statue was sculpted by Frédéric Bartholdi, who also created the Statue of Liberty. 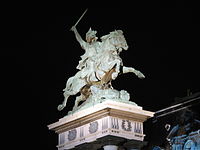 Clermont ranks among the oldest cities of France. The first known mention was by the Greek geographer Strabo, who called it the "metropolis of the Arverni" (meaning their oppidum, civitas or tribal capital). The city was at that time called Nemessos – a Gaulish word for a sacred forest, and was situated on the mound where the current cathedral of Clermont-Ferrand has been constructed. It was somewhere in the area around Nemossos where the Arverni chieftain Vercingetorix (later to head a unified Gallic resistance to Roman invasion under Julius Caesar) was born in around 72 BC. Also, Nemossos was situated not far from the plateau of Gergovia, where Vercingetorix pushed back the Roman assault at the Battle of Gergovia in 52 BC. After the Roman conquest, the city became known as Augustonemetum sometime in the 1st century, a name which combined its original Gallic name with that of the Emperor Augustus. Its population was estimated at 15,000–30,000 inhabitants in the 2nd century, making it one of the largest cities of Roman Gaul. It then became Arvernis in the 3rd century (taking its name, like other Gallic cities in this era, from the people who lived within its walls), going through an expansion that ended in the mid 3rd century.

The city became the seat of a bishop in the 5th century, at the time of the bishop Namatius or Saint Namace, who built a cathedral here described by Gregory of Tours. Clermont went through a dark period after the disappearance of the Roman Empire and during the whole High Middle Ages, marked by pillaging by the peoples who invaded Gaul. Between 471 and 475, Auvergne was often the target of Visigothic expansion, and the city was frequently besieged, including once by Euric. Although defended by Sidonius Apollinaris, at the head of the diocese from 468 to 486, and the patrician Ecdicius, the city was ceded to the Visigoths by emperor Julius Nepos in 475 and became part of the Visigothic kingdom until 507. A generation later, it became part of the kingdom of the Franks. On 8 November 535 the first Council of Clermont opened at Arvernis (Clermont), with fifteen bishops participating, including Caesarius of Arles, Nizier of Lyons (bishop of Trèves) and Saint Hilarius, bishop of Mende. Sixteen decrees were made there, notably the second canon that recalls that the granting of episcopal dignity must be according to the merits and not as a result of intrigues.

In 570, Bishop Avitus offered the Jews of his town (who numbered over 500) the alternative of baptism or expulsion. [1]

In 848, the city was renamed Clairmont, after the castle Clarus Mons. During this era, it was an episcopal city ruled by its bishop. Clermont was not spared by the Vikings at the time of the weakening of the Carolingian Empire either, being ravaged by the Normans under Hastein or Hastingen for the first time in 862 and 864 and, while its bishop Sigon carried out reconstruction work, again in 898 (or 910, according to some sources). Bishop Étienne II built a new Roman cathedral on the site of the current cathedral, consecrated in 946 but (apart from the towers, only replaced by the current ones in the 19th century, and some parts of the crypt, still visible) destroyed to build current Gothic cathedral.

Clermont was the starting point of the First Crusade, in which Christendom sought to free Jerusalem from Muslim domination: Pope Urban II preached the crusade there in 1095, at the Second Council of Clermont. In 1120, following repeated crises between the counts of Auvergne and the bishops of Clermont and in order to counteract the clergy's power, the counts founded the rival city of Montferrand on a mound next to the fortifications of Clermont, on the model of the new cities of the Midi springing up in the 12th and 13th centuries. Until the early modern period, the two remained separate cities: Clermont, an episcopal city; Montferrand, a comital one.

Clermont became a royal city in 1551, and in 1610, the inseparable property of the Crown. On 15 April 1630 the Edict of Troyes (the First Edict of Union) forcibly joined the two cities of Clermont and Montferrand. This union was confirmed in 1731 by Louis XV with the Second Edict of Union. At this time, Montferrand was no more than a satellite city of Clermont, in which condition it remained until the beginning of the 20th century. Wishing to retain its independence, Montferrand made three demands for independence, in 1789, 1848, and 1863.

In the 20th century, construction of the Michelin factories and of city gardens, which shaped the modern Clermont-Ferrand, definitively reunited Clermont and Montferrand. But even today, although the two cities have been amalgamated, one may find in Clermont-Ferrand two distinct downtowns, and Montferrand still retains a strong identity.

Food production and processing as well as engineering are major employers in the area, as are the many research facilities of major computer software and pharmaceutical companies.

The city's industry for a long time was linked to the French tyre manufacturer Michelin, which created the radial tyre and grew up from Clermont-Ferrand to become a worldwide leader in its industry. For most of the 20th century, it ran extensive factory works throughout the city, employing up to 30,000 workers at a time. While the company has maintained its headquarters in the city, most of the manufacturing is now done in foreign countries. This downsizing took place gradually, allowing the city to court new investment in other industries, avoiding the fate of many post-industrial cities and keeping it a very wealthy and prosperous area home of many high-income executives.

Rue Montlosier, in Clermont-Ferrand with the Puy de Dôme mountain in the background.

The main railway station has connections to Paris and several regional destinations: Lyon, Saint-Étienne, Moulins, Le Puy-en-Velay, Limoges. The motorway A71 connects Clermont-Ferrand with Orléans and Bourges, the A72 with Saint-Étienne, the A75 with Montpellier and the A89 with Bordeaux. The airport offers mainly flights within France.

Education is also an important factor in the economy of Clermont-Ferrand. The Université Blaise Pascal and Université d'Auvergne are located there and have a total student population of over 30,000, along with university faculty and staff.

A division of Polytech (an engineering school) located in Clermont-Ferrand made the news because two of its students, Laurent Bonomo and Gabriel Ferez, were murdered in June 2008 while enrolled in a program at Imperial College in London in what was to be known as the New Cross double murder.[3] 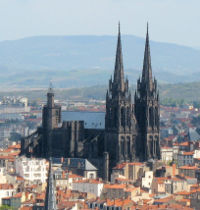 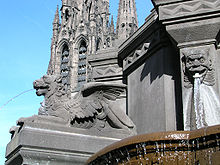 One of the 48 public fountains with the cathedral in background. The fountain and the cathedral are made with the typical black volcanic stone of the area named "pierre de Volvic".

Clermont-Ferrand was the home of mathematician and philosopher Blaise Pascal who tested Evangelista Torricelli's hypothesis concerning the influence of gas pressure on liquid equilibrium. This is the experiment where a vacuum is created in a mercury tube: Pascal's experiment had his brother-in-law carry a barometer to the top of the Puy-de-Dôme. The Université Blaise-Pascal (or Clermont-Ferrand II) is located primarily in the city and is named after him.

Clermont-Ferrand also hosts world's first international short film festival which originated in 1979. This festival, which brings thousands of people every year (137.000 in 2008) to the city, is the second French film Festival after Cannes in term of visitors, but the first one regarding the number of spectators (in Cannes visitors are not allowed in theatres, only professionals). This festival has revealed many young talented directors now well known in France and internationally such as Mathieu Kassovitz, Cédric Klapisch and Éric Zonka.

Beside the short film festival, Clermont-Ferrand hosts more than twenty music, film, dance and theatre festivals every year. With more than 200 artistic groups from dance to music, Clermont-Ferrand and the Auvergne region's cultural life is important in France. One of the city's nicknames is "France's Liverpool". Groups such as The Elderberries or Cocoon were formed there.

Additionally, the city was the subject of the acclaimed documentary The Sorrow and the Pity, which used Clermont-Ferrand as the basis of the film, which told the story of France under Nazi occupation and the Vichy regime of Marshal Pétain. Pierre Laval, Pétain's "handman" was an Auvergnat.

A racing circuit, the Charade Circuit, close to the city, using closed-off public roads held the French Grand Prix in 1965, 1969, 1970 and 1972. It was a daunting circuit, with such harsh elevation changes that caused some drivers to be ill as they drove. Winners included Jim Clark, Jackie Stewart (twice), and Jochen Rindt.

The city is also host to a rugby union club competing at national level, ASM Clermont Auvergne, as well as Clermont Foot Auvergne, a football club that has competed in France's second division, Ligue 2, since the 2007–08 season.

Clermont-Ferrand was the birthplace of

People that have lived in Clermont-Ferrand

Clermont-Ferrand is twinned with: