Valence (French pronunciation: [va.lɑ̃s]; Occitan: Valença) is a commune in southeastern France, the capital of the Drôme department, situated on the left bank of the Rhône, 65 miles (105 km) south of Lyon on the railway to Marseilles.

Its inhabitants are called Valentinois. Valence was a part of the French Towns and Lands of Art and History, and the city received four flowers in the Concours des villes et villages fleuris.

Formerly the duchy of Valentinois, it was ruled by the Duke of Valentinois, a title which is still claimed by the Sovereign Prince of Monaco, though he has no actual administrative control over the area. 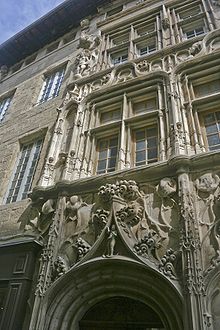 The word "valence" comes from Latin valentia, meaning "strength, capacity". Known in Roman times as Valentia Julia, the city had been the capital of the Segalauni, and the seat of a celebrated school prior to the Roman conquest. It became a colony under Augustus, and was an important town of Viennensis Prima under Valentinian I. It was the seat of a bishopric perhaps as early as the 4th century.

In the 5th century, control of Valentia passed from the Romans to the Alans and other barbarians: in 413, the Goths under Ataulf besieged and captured the usurper Jovinus at Valentia on behalf of the emperor Honorius. In 440, Alans led by Sambida were given deserted lands in Valentia by the Romans.[1] Three years later, Aetius settled the Burgundians in the region, which became part of their kingdom until 534. The city then fell successively under the power of the Franks, the Arabs of Spain, the sovereigns of Arles, the emperors of Germany, the counts of Valentinois, the counts of Toulouse, as well as its own bishops, who struggled to retain the control of the city they had won in the fifth century. These bishops were often in conflict with the citizens and the counts of Valentinois and to strengthen their hands against the latter the pope in 1275 united their bishopric with that of Die.

The citizens put themselves under the protection of the dauphin, and in 1456 had their rights and privileges confirmed by Louis XI and put on an equal footing with those of the rest of Dauphiné, the bishops consenting to recognize the suzerainty of the dauphin. In the 16th century Valence became the center of Protestantism for the province in 1563. The town was fortified by King Francois I. It became the seat of a celebrated university in the middle of the 15th century; but the revocation of the Edict of Nantes in 1685 struck a fatal blow at its industry, commerce and population. 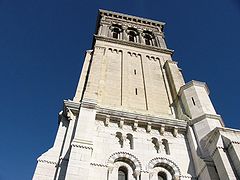 The Cathedral of St. Apollinaris.

The Cathedral of St. Apollinaris, which has an interesting apse, was rebuilt in the 11th century in the Romanesque style of Auvergne and consecrated in 1095 by pope Urban II. It suffered extensive damage in the French Wars of Religion, but it was restored in the first decade of the 17th century. The porch and the stone tower above it were rebuilt in 1861. The church contains the monument of Pius VI, who died at Valence in 1799. The library and the museum containing Roman antiquities, sculptures, and a picture gallery are housed in the old ecclesiastical seminary.[1][2]

The most notable of the monuments erected in this city to its natives include those to Émile Augier the dramatist by the duchess of Uzès (1897), and to General Championnet.

The industries of the city include metallurgical products, textiles, leather goods, jewelry and munitions, and it also serves as a processing and trade center for the surrounding agricultural region.

The Maison Pic is a world renowned three Michelin star restaurant and hotel, established in 1889.

The central railway station of Valence is the Gare de Valence-Ville, located just south of the town centre. The station offers connections to Lyon, Grenoble, Avignon, Gap and several regional destinations. In 2001 the Gare de Valence TGV opened along with the LGV Méditerranée, a high-speed rail line extending south from Valence to Marseilles. The station is only 1 kilometre (1 mi) south of the end of the LGV Rhône-Alpes, giving Valence much shorter journey times to northern destinations as well, with a journey to Paris taking 2h11. The TGV station is located 10 km northeast of the town.

A bikesharing scheme called Libélo started in March 2010, offering 200 bicycles for long-term hire and 180 for short-term hire, in 18 locations around the city. Charges are collected by smart card or credit card.[2]

Valence is now developing its high level educational role in the Drôme/Ardèche area with one INPG engineering school (ESISAR), one Institut universitaire de technologie (IUT) and annexes of three universities (UPMF, UJF, Stendhal). Many other and more specialized schools are also located in Valence.

Valence is twinned with: