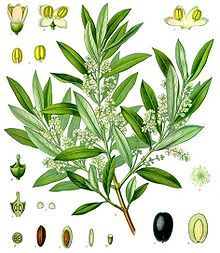 /ˈɑːləv/ or /ˈɒlɨv/), Olea europaea), is a species of a small tree in the family Oleaceae, native to the coastal areas of the eastern Mediterranean Basin (the adjoining coastal areas of southeastern Europe, western Asia and northern Africa) as well as northern Iran at the south end of the Caspian Sea.

Its fruit, also called the olive, is of major agricultural importance in the Mediterranean region as the source of olive oil. The tree and its fruit give its name to the plant family, which also includes species such as lilacs, jasmine, Forsythia and the true ash trees (Fraxinus). The word derives from Latin olīva which in turn comes from the Greek ἐλαία (elaía)[1][2] ultimately from Mycenaean Greek