Colmar
For the town in Luxembourg, see Colmar-Berg.

It is the capital of the department. Colmar is also the seat of the highest jurisdiction in Alsace, the appellate court.

It is situated along the Alsatian Wine Route and considers itself to be the "Capital of Alsatian Wine" (capitale des vins d'Alsace).

Colmar is the home town of the painter and engraver Martin Schongauer and the sculptor Frédéric Bartholdi, who designed the Statue of Liberty. The city is renowned for its well preserved old town, its numerous architectural landmarks and its museums, among which is the Unterlinden Museum.

Colmar was founded in the 9th century. This was the location where Charles the Fat held a diet in 884. Colmar was granted the status of a free imperial city of the Holy Roman Empire in 1226. In 1575, the city adopted the Protestant Reformation, long after the northern neighbours of Strasbourg and Sélestat. During the Thirty Years' War, the city was taken by the armies of Sweden in 1632, who held it for two years. The city was conquered by France under Louis XIV in 1673.

In 1679 (Treaties of Nijmegen) Colmar was ceded to France. With the rest of Alsace, Colmar was annexed by the newly formed German Empire in 1871 as a result of the Franco-Prussian War. It returned to France after World War I, was annexed by Nazi Germany in 1940, and then reverted to French control after the battle of the "Colmar Pocket" in 1945. Colmar has been continuously governed by conservative parties since 1947, the Popular Republican Movement (1947–1977), the Union for French Democracy (1977–1995) and the Union for a Popular Movement (since 1995), and has had only three mayors during that time.

The Colmar Treasure, hidden during the Black Death, was discovered here in 1863. 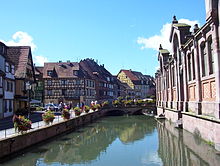 The Lauch River running through Colmar

Colmar is 64 kilometres (40 mi) south-southwest of Strasbourg, at 48.08°N, 7.36°E, on the Lauch River, directly to the east of the Vosges Mountains. It is connected to the Rhine by a canal.

Colmar has a sunny microclimate and is the second driest city in France, with an annual precipitation of just 550 mm, making it ideal for Alsace wine. It is considered the capital of the Alsatian wine region.

The dryness results from the town's location next to mountains which force clouds arriving from the west to rise, and much of their moisture to condense and fall as precipitation over the higher ground, leaving the air warmed and dried by the time it reaches Colmar.

Mostly spared by the destructions of the French Revolution and the wars of 1870–1871, 1914–1918 and 1939–1945, the cityscape of old-town Colmar is homogenous and renowned among tourists. The area crossed by canals of the river Lauch, and which formerly served as the butcher's, tanner's and fishmonger's quarter, is now called "little Venice" (la Petite Venise). Colmar's cityscape (and neighbouring Riquewihr's) served for the design of the Japanese animated film Howl's Moving Castle. 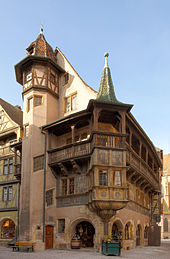 Maison Pfister. The house can easily be spotted in Howl's Moving Castle. 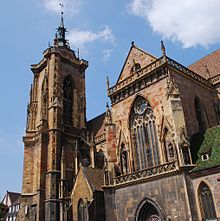 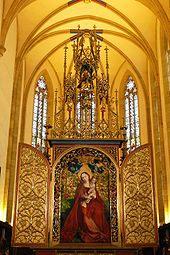 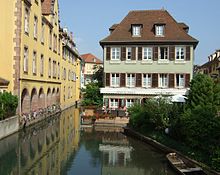 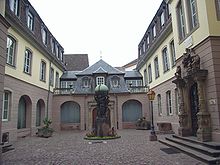 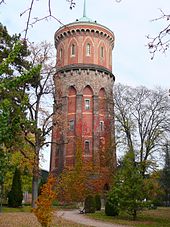 Colmar's secular and religious architectural landmarks reflect eight centuries of Germanic and French architecture and the adaptation of their respective stylistic language to the local customs and building materials (pink and yellow Vosges sandstone, timber framing).

The Municipal Library of Colmar (Bibliothèque municipale de Colmar) owns one of the richest collections of incunabula in France, with more than 2,300 volumes.[5] This is quite an exceptional number for a city that is neither the main seat of a university, nor of a college, and has its explanation in the disowning of local monasteries, abbeys and convents during the French Revolution and the subsequent gift of their collections to the town.

The train station Gare de Colmar offers connections to Strasbourg, Mulhouse, Besançon, Zürich and several regional destinations. Colmar was also once linked to Freiburg im Breisgau, in Germany and on the other side of the Rhine, by the Freiburg–Colmar international railway. However the railway bridge over the Rhine between Breisach and Neuf-Brisach was destroyed in 1945 and never replaced.

Colmar shares the Université de Haute-Alsace with the neighbouring, larger city of Mulhouse. Of the approximately 8,000 students of the UHA, circa 1,500 study at the Institut universitaire de technologie (IUT) Colmar, at the Colmar branch of the Faculté des Sciences et Techniques and at the Unité de Formation et de Recherche Pluridisciplinaire d'Enseignement Professionalisé Supérieur (UFR P.E.P.S.).

Since 1980, Colmar is home to the international summer festival of classical music Festival de Colmar (also known as Festival international de musique classique de Colmar). In its first version (1980 to 1989), it was placed under the artistic direction of the German conductor Karl Münchinger. Since 1989, it is helmed by the Russian violinist and conductor Vladimir Spivakov. 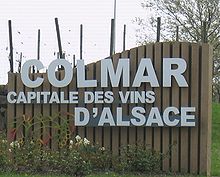 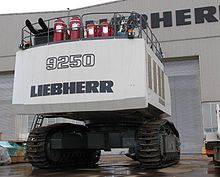 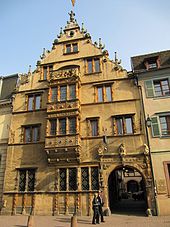 Colmar is an affluent city whose primary economic strength lies in the flourishing tourist industry. But it is also the seat of several large companies: Timken (European seat), Liebherr (French seat), Leitz (French seat), Capsugel France (A division of Pfizer) ...

Every year since 1947, Colmar is host to what is now considered as the biggest annual commercial event as well as the largest festival in Alsace,[6] the Foire aux vins d'Alsace (Alsacian wine fair).

When Air Alsace existed, its head office was on the grounds of Colmar Airport.[7]

The following people were born in Colmar:

Colmar is twinned with: