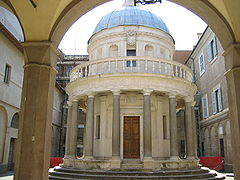 Tempietto di San Pietro in Montorio, Rome, 1502, by Bramante. This small temple marks the place where St Peter was put to death. 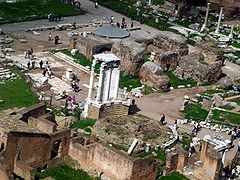 Temple of Vesta, Rome, 205 AD. As the most important temple of Ancient Rome, it became the model for Bramante's Tempietto

Renaissance architecture is the architecture of the period between the early 15th and early 17th centuries in different regions of Europe, demonstrating a conscious revival and development of certain elements of ancient Greek and Roman thought and material culture. Stylistically, Renaissance architecture followed Gothic architecture and was succeeded by Baroque architecture. Developed first in Florence, with Filippo Brunelleschi as one of its innovators, the Renaissance style quickly spread to other Italian cities. The style was carried to France, Germany, England, Russia and other parts of Europe at different dates and with varying degrees of impact.

The Renaissance style places emphasis on symmetry, proportion, geometry and the regularity of parts as they are demonstrated in the architecture of classical antiquity and in particular ancient Roman architecture, of which many examples remained. Orderly arrangements of columns, pilasters and lintels, as well as the use of semicircular arches, hemispherical domes, niches and aedicules replaced the more complex proportional systems and irregular profiles of medieval buildings.

Although the term Renaissance was used first by the French historian Jules Michelet, it was given its more lasting definition from the Swiss historian Jacob Burckhardt, whose book, Die Kultur der Renaissance in Italien 1860,[1] was influential in the development of the modern interpretation of the Italian Renaissance. The folio of measured drawings Édifices de Rome moderne; ou, Recueil des palais, maisons, églises, couvents et autres monuments (The Buildings of Modern Rome), first published in 1840 by Paul Letarouilly, also played an important part in the revival of interest in this period.[2] The Renaissance style was recognized by contemporaries in the term "all'antica", or "in the ancient manner" (of the Romans)..