The palace was designed by Michelozzo di Bartolomeo[1] for Cosimo de' Medici, head of the Medici banking family, and was built between 1445[2] and 1460. It was well known for its stone masonry that includes rustication and ashlar.[3] The tripartite elevation used here expresses the Renaissance spirit of rationality, order, and classicism on human scale. This tripartite division is emphasized by horizontal stringcourses that divide the building into stories of decreasing height. The transition from the rusticated masonry of the ground floor to the more delicately refined stonework of the third floor makes the building seem lighter and taller as the eye moves upward to the massive cornice that caps and clearly defines the building's outline.

Michelozzo di Bartolomeo was influenced in his building of this palace by both classical Roman and Brunelleschian principles. During the Renaissance revival of classical culture, ancient Roman elements were often replicated in architecture, both built and imagined in paintings. In the Palazzo Medici Riccardi, the rusticated masonry and the cornice had precedents in Roman practice, yet in totality it looks distinctly Florentine, unlike any known Roman building.

Similarly, the early Renaissance architect Brunelleschi used Roman techniques and influenced Michelozzo. The open colonnaded court that is the center of the palazzo plan has roots in the cloisters that developed from Roman peristyles. The once open corner loggia and shop fronts facing the street were walled in during the 16th century. In their place, Michelozzo placed ground-floor "kneeling windows" (finestre inginocchiate) supported on innovative scrolling consoles and framed in pedimented aedicules that recall the similarly treated main doorway. 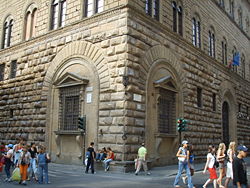 The "kneeling windows" a feature later copied by the Medici at their Palazzo Pitti, also in Florence.

The building reflects the accumulated wealth of the Medici family. The fifteen-year-old Galeazzo Maria Sforza was entertained in Florence in 17 April 1459, and left a letter describing, perhaps in the accomplished terms of a secretary, the all-but-complete palazzo, where his whole entourage was nobly[4] accommodated:

...a house that is — as much in the handsomeness of the ceilings, the height of the walls, smooth finish of the entrances and windows, number of chambers and salons, elegance of the studies, worth of the books, neatness and gracefulness of the gardens, as it is in the tapestry decorations,[5] cassoni of inestimable workmanship and value, noble sculptures, designs of infinite kinds, as well of priceless silver — the best I may ever have seen..."[6]

Niccolò de' Carissimi, one of Galeazzo Maria's counsellors, furnished further details of the rooms and garden:

decorated on every side with gold and fine marbles, with carvings and sculptures in relief, with pictures and inlays done in perspective by the most accomplished and perfect of masters even in the very benches and floors of the house; tapestries and household ornaments of gold and silk;silverware and bookcases that are endless... then a garden done in the finest of polished marbles, with diverse plants, which seems a thing not natural but painted."[7] 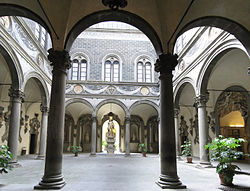 Cosimo received the young Sforza in the chapel "not less ornate and handsome than the rest of the house". The building still includes, as its only 15th century interior that is largely intact, the Magi Chapel, frescoed by Benozzo Gozzoli, who completed it in 1461 with a wealth of anecdotal detail of character types traditionally held to be portraits of members of the Medici family, along with the emperors John VIII Palaiologos and the Emperor Sigismund of Luxemburg, parading through Tuscany in the guise of the Three Wise Men.[8] Other decorations included two lunettes by Filippo Lippi, depicting Seven Saints and the Annunciation, now at the National Gallery, London.

When the Medici family returned to Florence after their short-lived exile in the early 15th century, they kept a low profile and executed their power behind the scenes. This is reflected in the plain exterior of this building, and is said to be the reason why Cosimo de' Medici rejected Brunelleschi's earlier proposal.

The palace was the site of the wedding reception between Ferdinando de' Medici, Grand Prince of Tuscany and Violante Beatrice of Bavaria in 1689.