Cloister
"Cloisters" redirects here. For the museum in New York City, see The Cloisters.
For other uses, see Cloister (disambiguation). 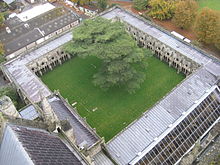 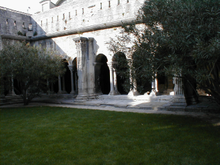 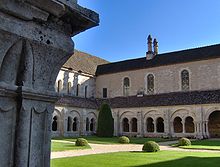 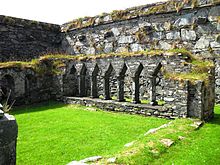 A cloister (from Latin claustrum, "enclosure") is a rectangular open space surrounded by covered walks or open galleries, with open arcades on the inner side, running along the walls of buildings and forming a quadrangle or garth. The attachment of a cloister to a cathedral or church, commonly against a warm southern flank,[1] usually indicates that it is (or once was) part of a monastic foundation, "forming a continuous and solid architectural barrier... that effectively separates the world of the monks from that of the serfs and workmen, whose lives and works went on outside and around the cloister."[2]

Cloistered (or claustral) life is also another name for the life of a monk or nun in the enclosed religious orders; the modern English term enclosure is used in contemporary Catholic church law[3] to mean cloistered, and cloister is sometimes used as a metonymic synonym for monastery.[4]

Historically, the early medieval cloister had several antecedents, the peristyle court of the Greco-Roman domus, the atrium and its expanded version that served as forecourt to early Christian basilicas, and certain semi-galleried courts attached to the flanks of early Syrian churches.[5] Walter Horn suggests that the earliest coenobitic communities, which were established in Egypt by Saint Pachomius, did not result in cloister construction, as there were no lay serfs attached to the community of monks, thus no separation within the walled community was required; Horn finds the earliest prototypical cloisters in some exceptional[6] late fifth-century monastic churches in southern Syria, such as the Convent of Saints Sergios and Bacchos, at Umm-is-Surab (AD 489), and the colonnaded forecourt of the convent of Id-Dêr,[7] but nothing similar appeared in the semieremitic Irish monasteries' clustered roundhouses nor in the earliest Benedictine collective communities of the West.

One of the earliest visual representations of the claustral plan is the Carolingian plan of St. Gall, a copy made at Reichenau of a scheme worked out at the two reforming synods held at Aachen, 816 and 817. Though cloisters served functions of quiet meditation or a study garden, the uses of the surrounding buildings in the St. Gall plan, each entered only through the covered porches, show how central the cloister was to the communal life: on the eastern side stood the calefactoria or warming room, the sole heated space, with above it the dormitory; on the south side the refectory, with above it the vestiarium ("vestiary"); on the west side the cellar for wines and beer with above it the larder.

In the time of Charlemagne the requirements of a separate monastic community within an extended and scattered manorial estate created this "monastery within a monastery" in the form of the locked cloister, an architectural solution allowing the monks to perform their sacred tasks apart from the distractions of laymen and servants.[8] Horn offers as early examples Abbot Gundeland's "Altenmünster" of Lorsch abbey (765-74), as revealed in the excavations by Frederich Behn;[9] Lorsch was adapted without substantial alteration from a Frankish nobleman's villa rustica, in a tradition unbroken from late Roman times. Another early cloister, that of the abbey of Saint-Riquier (790-99), took a triangular shape, with chapels at the corners, in conscious representation of the Trinity.[10] A square cloister sited against the flank of the abbey church were built at Inden (816) and the abbey of St. Wandrille at Fontenelle (823-33). At Fulda, a new cloister (819) was sited to the liturgical west of the church "in the Roman manner"[11] familiar from the forecourt of Old St. Peter's Basilica because it would be closer to the relics.

The hortus conclusus or "enclosed garden" of medieval times, whether secular or claustral, featured the essential well at the center, from which four paths divided the space into quadrants.