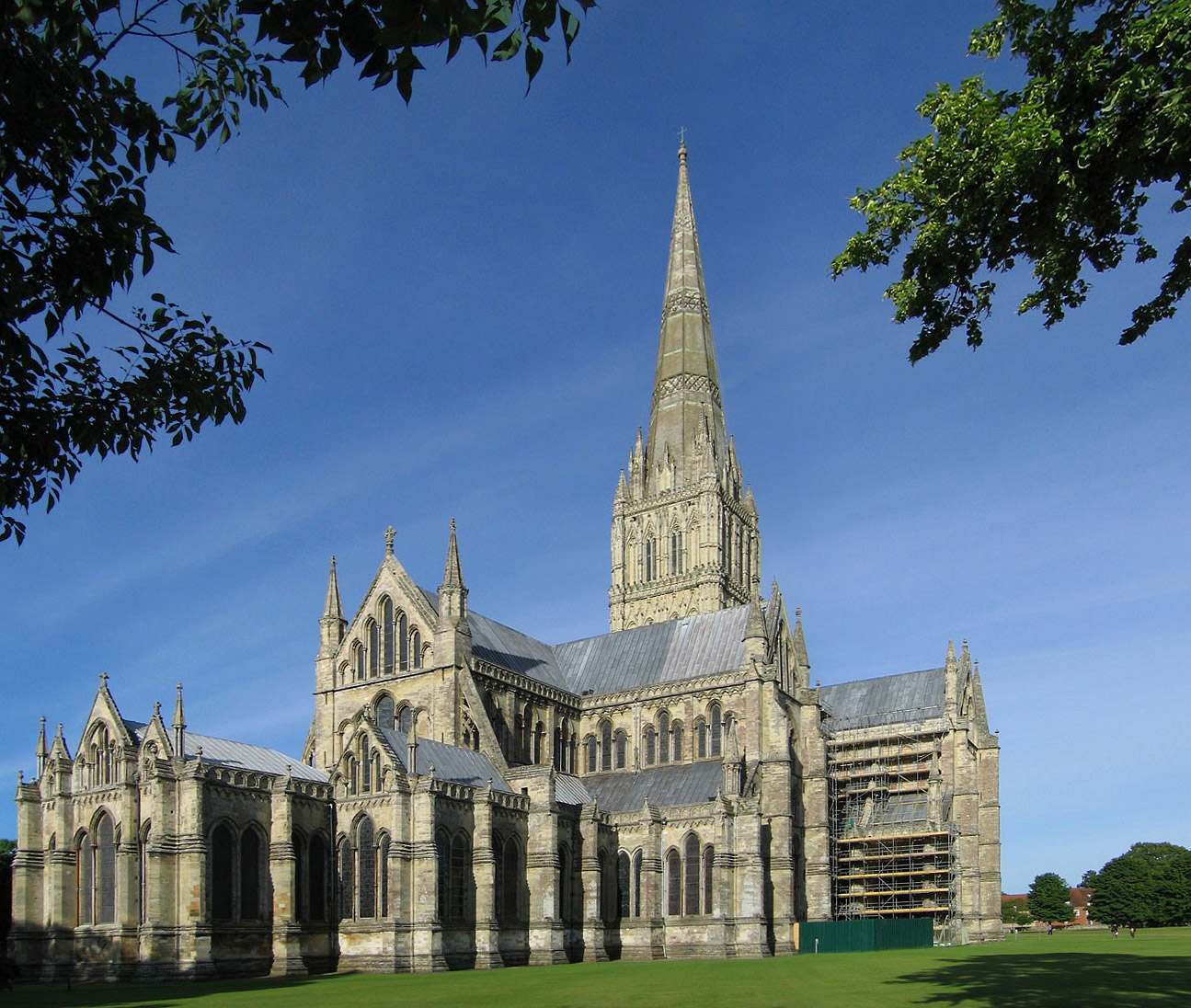 Salisbury Cathedral is an Anglican in Salisbury, , considered one of the leading examples of .The main body was completed in only 38 years.

The cathedral has the tallest church spire in the (123m/404ft). Visitors can take the "Tower Tour" where the interior of the hollow spire, with its ancient wood scaffolding, can be viewed. The cathedral also has the largest and the largest cathedral close in Britain (80 acres). The Cathedral contains the world's oldest working (from AD 1386) and has one of the four surviving original copies of the (all four original copies are in Britain).

As a response to deteriorating relations between the clergy and the military at , the decision was taken to resite the cathedral and the bishopric was moved to its present place in Salisbury. [Evans, p. 10-11] The move occurred during the tenure of Bishop , who was a wealthy man and donated the new land for construction. The new cathedral was also paid for by donations, principally by all the canons and vicars of the south-west, who were asked to contribute a fixed annual sum until its completion. [Evans, p. 13] . Legend has it that the Bishop of Old Sarum shot an arrow in the direction he would build the cathedral, the arrow hit a deer and the deer finally died in the place where Salisbury Cathedral is now.

The foundation stone was laid on 28 April 1220. [Evans, p. 15] Due to the high water table in the new location, the cathedral was built on only four feet of foundations, and by 1258 the , s and choir were complete. The west front was ready by 1265. The cloisters and chapter house were completed around 1280. Because the cathedral was built in only 38 years, Salisbury Cathedral has a single consistent architectural style, Early English Gothic.

The only major sections of the cathedral built later were the , , tower and , which at 404 feet (123 s) dominated the skyline from 1320. Whilst the spire is the cathedral's most impressive feature, it has also proved to be troublesome. Together with the tower, it added 6,397 tons (6,500 tonnes) to the weight of the building. Without the addition of es, bracing arches and ties over the succeeding centuries, it would have suffered the fate of spires on other great ecclesiastical buildings (such as ) and fallen down; instead, Salisbury is the tallest surviving pre-1400 spire in the world.Fact|date=May 2008 To this day the large supporting pillars at the corners of the spire are seen to bend inwards under the strain. The addition of tie beams above the crossing led to a false ceiling being installed below the lantern stage of the tower.

Significant changes to the cathedral were made by the in 1790, including replacement of the original and demolition of the which stood about 320 feet (100 metres) north west of the main building. Salisbury is one of only three English cathedrals to lack a ring of bells, the others being and .

The is notable for its octagonal shape, slender central pillar and decorative mediæval . The frieze circles the interior, just above the stalls, and depicts scenes and stories from the books of and , including , , the , and , and . The chapter house also displays the best-preserved of the four surviving original copies of . This copy came to Salisbury because , who was present at in 1215, was given the task of distributing some of the original copies. Later, Elias became a Canon of Salisbury and supervised the construction of Salisbury Cathedral.

The clock dating from about 1386 is the oldest working medieval clock in the world. [cite web |last= | first=|title=Oldest Working Clock, Frequently Asked Questions, Salisbury Cathedral|url=http://www.salisburycathedral.org.uk/750.php |accessdate=2008-01-17] The clock has no face because all clocks of that date rang out the hours on a bell. It was originally located in a bell tower that was demolished in 1792. The clock was then placed in storage and forgotten until it was discovered in 1929, in an attic of the cathedral. It was repaired and restored to working order in 1956. In 2007 remedial work and repairs were carried out to the clock. [cite web |last= | first=|title=Clock repaired, Salisbury Cathedral |url=http://www.salisburycathedral.org.uk/news.php?id=239 |accessdate=2008-01-17]

The Cathedral choir has triplet cathedral choristers. Matt, Thomas and Ewan Stockwell. Ewan was Bishops Chorister being the eldest.

Depictions in art, literature and film

The cathedral is the subject of famous s by . The view depicted in the paintings has changed very little in almost two centuries.

The cathedral is also the subject of William Golding's novel "The Spire" which deals with the fictional Dean Jocelin who makes the building of the spire his life's work.

In 's historical novel "Sarum," the narrative deals with the human settlement of the Salisbury area from pre-historic times just after the last to the modern era. The construction of the Cathedral itself, its famous spire, bell tower and Charter House are all important plot points in the novel, which blends historic characters with invented ones.

The cathedral featured as the setting for the 2005 television drama , written by and directed by Susanna White. A teacher takes a party of unruly fifth-form school children on an outing to the cathedral, and, unbeknownst to them, marking the day 21 years previously when he had proposed to his girlfriend who had later committed suicide. The journey is also his personal pilgrimage to regain his lost spirituality.

[http://npor.emma.cam.ac.uk/cgi-bin/Rsearch.cgi?Fn=Rsearch&rec_index=N10312 Details of the organ from the National Pipe Organ Register]