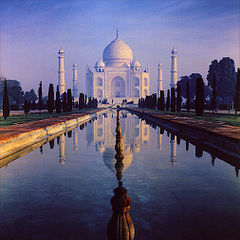 Taj Mahal at Agra, the epitome of Mughal Architecture

Mughal architecture, an amalgam of Islamic, Persian[1][2], Turkish and Indian architecture, is the distinctive style developed by the Mughals in the 16th, 17th and 18th centuries in what is now India, Pakistan, Bangladesh and Afghanistan. It is symmetrical and decorative in style.

The Mughal dynasty was established after the victory of Babur at Panipat in 1526. During his five-year reign, Babur took considerable interest in erecting buildings, though few have survived.[3] The influence of Mughal Architecure lives on in Afghan, Pakistani and Indian architecture today. 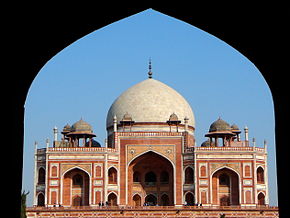 Humayun's Tomb, Delhi built during the reign of Akbar.

The emperor Akbar (1556–1605) built largely, and the style developed vigorously during his reign. As in the Gujarat and other styles, there is a combination of Muslim and Hindu features in his works. Akbar constructed the royal city of Fatehpur Sikri, located 26 miles (42 km) west of Agra, in the late 16th century. The numerous structures at Fatehpur Sikri best illustrate the style of his works - the southern gateway of the mosque, which is known as Buland Darwaza, is the largest of its kind in India. The Mughals also built tombs, which include the tomb of Akbar's father Humayun, and the Tomb of Akbar the Great at Sikandra, near Agra.

Under Jahangir (1605–1627) the Hindu features vanished from the style; his great mosque at Lahore is in the Persian style, covered with enamelled tiles. At Agra, the tomb of Itmad-ud-Daula, which was completed in 1628, was built entirely of white marble and covered in pietra dura mosaic. Jahangir also built the Shalimar Gardens and its accompanying pavilions on the shore of Dal Lake in Kashmir. He also built a monument to his pet deer, Hiran Minar in Sheikhupura, Pakistan and due to his great love for his wife, after his death she went on to build his mausoleum in Lahore. 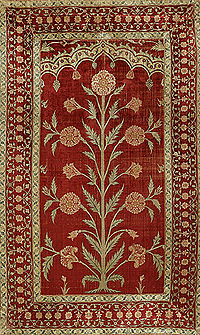 Architectural Panel, Mughal dynasty, late 17th century, India. This panel either hung in the doorway of a palace or lined a nobleman’s tent.

The force and originality of the style gave way under Shah Jahan (1627–1658) to a delicate elegance and refinement of detail, illustrated in the palaces erected in his reign at Agra and Delhi. Some examples include the Taj Mahal at Agra and the tomb of Mumtaz Mahal, the wife of Jahan. The Moti Masjid (Pearl Mosque) in the Agra Fort and The Jama Masjid at Delhi are imposing buildings, and their position and architecture have been carefully considered so as to produce a pleasing effect and feeling of spacious elegance and well-balanced proportion of parts. Jahan also built the Tomb of Jahangir and sections of the Lahore Fort that include the Moti Masjid, Sheesh Mahal, and Naulakha pavilion which are all enclosed in the fort. He also built a mosque named after himself in Thatta called Shahjahan Mosque. Another mosque was built during his tenure in Lahore called Wazir Khan Mosque, by Shaikh Ilm-ud-din Ansari who was the court physician to the emperor.

The Taj Mahal, the "teardrop on the cheek of eternity" (Rabindranath Tagore), was completed in 1648 by the emperor Shah Jahan in memory of his wife Mumtaz Mahal. Its longest plane of symmetry runs through the entire complex except for the sarcophagus of Shah Jahan, which is placed off centre in the crypt room below the main floor. This symmetry extended to the building of an entire mirror mosque in red sandstone, to complement the Mecca-facing mosque place to the west of the main structure.

The Taj Mahal (1630–1648) in Agra, India and the Shalimar Garden (1641–1642) in Lahore, Pakistan, are two sites which are on the world heritage list of UNESCO. The Taj is considered[by whom?] to be one of the most beautiful monuments of the world and was included in the New Seven Wonders of the World list. 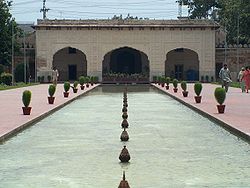 A view of a pavilion in Shalimar Garden, Lahore, Pakistan 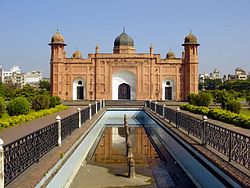 Lalbagh Fort, constructed in the mid-17th century in Dhaka during the reign of Aurangzeb

In Aurangzeb's reign (1658–1707) squared stone and marble was replaced by brick or rubble with stucco ornament. Srirangapatna and Lucknow have examples of later Indo-Muslim architecture. He made additions to the Lahore Fort and also built one of the thirteen gates which was later named after him (Alamgir). Aurangzeb also built the Badshahi Mosque which was constructed in 1674 under the supervision of Fida'i Koka. This mosque is adjacent to the Lahore Fort and is the last in the series of congregational mosques in red sandstone and is closely modeled on the one Shah Jahan built at Shahjahanabad. The red sandstone of the walls contrasts with the white marble of the domes and the subtle intarsia decoration. The materials used are a departure from the local tradition of tile revetment that is seen in the Wazir Khan Mosque. According to Blair and Bloom, the cusped arches and arabesque floral patterns inlaid in white marble give the building, despite its vast proportions, a lighter appearance than its prototype.

Additional monuments from this period are associated with women from Aurangzeb's imperial family. The construction of the elegant Zinat al-Masjid in Daryaganij was overseen by Aurangzeb's second daughter Zinat al-Nisa. The delicate brick and plaster mausoleum in the Roshan-Ara-Bagh in Sabzimabnkivh ,kiog,lhuolndi was for Aurangzeb's sister Roshan-Ara who died in 1671. The tomb of Roshanara Begum and the garden surrounding it were neglected for a long time and are now in an advanced state of decay. Bibi Ka Maqbara was a mausoleum built by Prince Azam Shah, son of Emperor Aurangzeb, in the late 17th century as a loving tribute to his mother, Dilras Bano Begam in Aurangabad, Maharashtra. The Alamgiri Gate, built in 1673 A.D., is the main entrance to the Lahore Fort in present day Lahore. It was constructed to face west towards the Badshahi Mosque in the days of the Mughal Emperor Aurangzeb.

Another construction of Mughal era is the Lalbagh Fort (also known as "Fort Aurangabad"), a Mughal palace fortress at the Buriganga River in the southwestern part of Dhaka, Bangladesh, whose construction started in 1678 during the reign of Aurangzeb.[4]

Mughal gardens are a group of gardens built by the Mughals in the Islamic style of architecture. This style was influenced by Persian gardens and Timurid gardens. Significant use of rectilinear layouts are made within the walled enclosures. Some of the typical features include pools, fountains and canals inside the gardens. The famous gardens are the Char Bagh gardens at Taj Mahal, Shalimar Gardens of Lahore, Delhi and Kashmir as well as Pinjore Garden in Haryana.