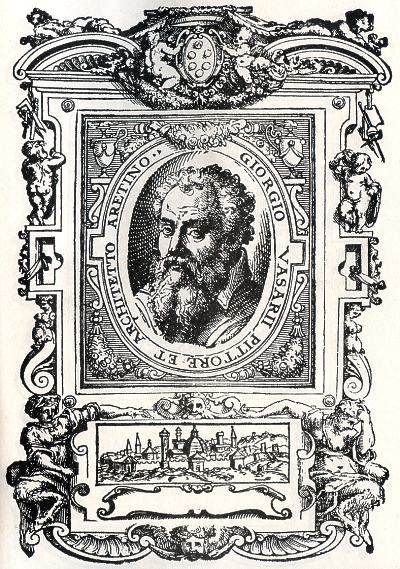 Giorgio Vasari ( – ) was an Italian painter and , who is today famous for his biographies of Italian artists, considered the ideological foundation of art-historical writing.

Vasari was born in , . Recommended at an early age by his cousin , he became a pupil of , a skillful painter of . Sent to at the age of sixteen by Cardinal Silvio Passerini, he joined the circle of and his pupils and where his humanist education was encouraged. He was befriended by whose painting style would influence his own.

In 1529 he visited and studied the works of Raphael and others of the Roman . Vasari's own paintings were more admired in his lifetime than afterwards. He was consistently employed by patrons in the in and Rome, and he worked in , Arezzo and other places. Many of his pictures still exist, the most important being the wall and ceiling paintings in the great Sala di Cosimo I of the in Florence, where he and his assistants were at work from 1555, and his uncompleted es inside the vast of the Duomo, completed by and with the help of . He also helped organize the decoration of the Studiolo, now reassembled in the Palazzo Vecchio.

As an architect, Vasari was perhaps more successful than as a painter. The of the Palazzo degli Uffizi by the opens up the vista at the far end of its long narrow courtyard, a unique piece of urban planning that functions as a public piazza, and which, if considing it as a short street, is the unique Renaissance street with a unified architectural treatment. In Florence Vasari also built the long passage connecting the Uffizi with the , through arcading across the , now called after him. He also renovated the fine medieval churches of and Santa Croce, from both of which he removed the original and loft, and remodelled the retro- in the Mannerist taste of his time.

In Rome, Vasari worked with and at 's .

Vasari enjoyed a high repute during his lifetime and amassed a considerable fortune. In 1547 he built himself a fine house in Arezzo (now a museum honoring him), and spent much labour in decorating its walls and vaults with paintings. He was elected one of the municipal council or of his native town, and finally rose to the supreme office of e.

In 1563, he helped found the Florence "Accademia del Disegno" (now the ""), with the Grand Duke and Michelangelo as "capi" of the institution and 36 artists chosen as members.

Vasari died at Florence on .

As the first Italian art historian, he initiated the genre of an encyclopedia of artistic biographies that continues today. Vasari coined the term "" ("rinascita") in print, though an awareness of the ongoing "rebirth" in the arts had been in the air from the time of Alberti. Vasari's work was first published in 1550, and dedicated to Grand Duke . It included a valuable treatise on the technical methods employed in the arts. It was partly rewritten and enlarged in 1568 and provided with woodcut of artists (some conjectural), entitled "" (or, in English, "").

The work has a consistent and notorious bias in favour of Florentines and tends to attribute to them all the new developments in Renaissance art—for example, the invention of . Venetian art in particular, let alone other parts of Europe, is systematically ignored. Between his first and second editions, Vasari visited Venice and the second edition gave more attention to Venetian art (finally including ) without achieving a neutral point of view.

Vasari's biographies are interspersed with amusing gossip. Many of his anecdotes have the ring of truth, although most are likely inventions.Fact|date=August 2008 Others are generic fictions, such as the tale of young painting a fly on the surface of a painting by that the older master repeatedly tried to brush away, a genre tale that echoes anecdotes told of the Greek painter Apelles. With a few exceptions, however, Vasari's aesthetic judgment was acute and unbiased. He did not research archives for exact dates, as modern art historians do, and naturally his biographies are most dependable for the painters of his own generation and the immediately preceding one. Modern criticism—with all the new materials opened up by research—has corrected many of his traditional dates and attributions. The work remains a classic even today, though it must be supplemented by modern critical research.

Vasari includes a sketch of his own biography at the end of his "Vite", and adds further details about himself and his family in his lives of Lazzaro Vasari and Francesco Salviati. The "Lives" have been translated into French, German, Spanish and English.
* [http://easyweb.easynet.co.uk/giorgio.vasari/vaspref.htm Excerpts from the "Vite" combined with photos of works mentioned by Vasari.] "'

Copies of Vasari’s "Lives of the Artists" online