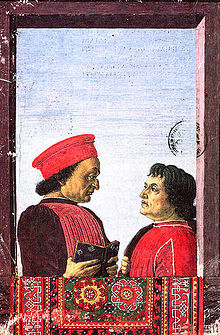 Federico Montefeltro with humanist writer Cristoforo Landino (right), in an example of Oriental carpets in Renaissance painting, by Sandro Botticelli, circa 1460.

A member of a noble family from the Casentino, Landino was born in Florence in 1424. He studied law and Greek (under George of Trebizond). Against his father's will he turned away from a career in the law and decided to study philosophy instead, a decision he would not have been able to make but for the patronage of Piero di Cosimo de' Medici. Landino's wife Lucrezia was a member of the Alberti family.

In 1458 Landino replaced Cristoforo Marsuppini as the chair of rhetoric and poetry at the Florentine Studio. His students, seeking a more renowned teacher, initially opposed Landino's appointment, but he nevertheless remained and became an important part of the cultural and intellectual life of Florence.

Landino was a member of the Platonic Academy founded by Marsilio Ficino in Florence. He was the tutor of Lorenzo de' Medici and his brother Giuliano. Landino also held public office, first as chancellor of the Guelf party (1467) and later as scriptor of public letters for the Signoria.

Landino died in 1498 in a villa in Borgo alla Collina, which he received as a gift from the Medici.

Landino was a prolific writer. He championed the use of vernacular Italian.

He wrote three works framed as philosophical dialogues: De anima (1453), De vera nobilitate (1469), and the Disputationes Camaldulenses (c. 1474). In the Disputationes several humanists compare the merits of the active and the contemplative life.

As the lady "Xandra" Landino published three volumes of Latin poems. They were dedicated in 1458 to Piero de' Medici. He also prepared many letters and orations, which were published long after his death in Italian in Venice (1561).

Of special importance to the Renaissance, Landino prepared commentaries on the Aeneid (1478) and The Divine Comedy (1481). To promote the use of vernacular Italian, Landino held lectures on Petrarch and translated and published Pliny's Historia naturalis (1476) and Giovanni Simonetta's Latin life of Francesco Sforza (1490).