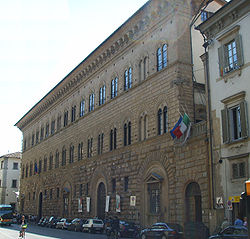 Michelozzo di Bartolomeo Michelozzi (1396–1472) was an Italian architect and sculptor.

Born in Florence, the son of a tailor, he was a pupil of Ghiberti in his early years and later collaborated with Donatello.

He worked in marble, bronze, and silver. The statue of the young St. John over the door of the Duomo in Florence, opposite the Baptistery, was created by him; he also made the silver statuette of John the Baptist on the altar-frontal of San Giovanni. Michelozzo's great friend and patron was Cosimo de' Medici, whom he accompanied to Venice in 1433 during his short exile. While at Venice, Michelozzo built the library of San Giorgio Maggiore, and designed other buildings there.

In 1428, together with Donatello, he erected an open-air pulpit at an angle of the Cathedral of St. Stephen at Prato. The large Palazzo Medici in Florence, built by Cosimo, was designed by him; it is one of the noblest specimens of Italian fifteenth-century architecture, in which the great taste and skill of the architect has combined the delicate lightness of the earlier Italian Gothic with the massive stateliness of the classical style. With great engineering skill Michelozzo shored up, and partly rebuilt, the Palazzo Vecchio, then in a ruinous condition, and added to it many important rooms and staircases. When, in 1437, through Cosimo's liberality, the monastery of San Marco at Florence was handed over to the Dominicans of Fiesole, Michelozzo was employed to rebuild the domestic part and remodel the church.

For Cosimo he designed numerous other buildings, mostly of them of noteworthy importance. Among these were a guest-house at Jerusalem for the use of Florentine pilgrims, Cosimo's summer villa at Careggi, and the fortified castello that he rebuilt from 1452 as the Villa Medicea di Cafaggiolo in Mugello. For Giovanni de' Medici, Cosimo's son, he built a very large villa at Fiesole.

In 1461-1464 he constructed the walls of Ston, in Dalmatia, the largest medieval wall in Europe[1]

In spite of Vasari's statement that he died at the age of sixty-eight, he appears to have lived till 1472. He is buried in the monastery of San Marco, Florence.