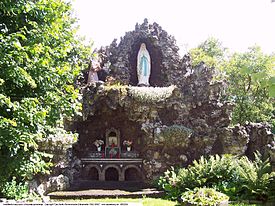 A Marian grotto in Bischofferode (Germany)

A grotto (Italian grotta and French "grotte") is any type of natural or artificial cave that is associated with modern, historic or prehistoric use by humans. When it is not an artificial garden feature, a grotto is often a small cave near water and often flooded or liable to flood at high tide. The picturesque Grotta Azzurra at Capri and the grotto of the villa of Tiberius in the Bay of Naples are outstanding natural seashore grottoes. Whether in tidal water or high up in hills, they are very often in limestone geology where the acidity dissolved in percolating water has dissolved the carbonates of the rock matrix as it has passed through what were originally small fissures. See karst topography, cavern.

Mantic springs that issued from grottoes were a feature of Apollo's oracles at Delphi, Corinth, and Clarus.[1] The new-built Hellenistic city of Rhodes was provided with rock-cut artificial grottos with "naturalistic" features.[2] At the great Roman sanctuary of Praeneste south of Rome, the oldest portion of the primitive sanctuary was situated on the next-to-lowest terrace, in a grotto in the natural rock where there was a spring that developed into a well. Such a sacred spring had its native nymph, who might be honored in a grotto-like nymphaeum, where the watery element was never far to seek.[3]

Tiberius filled his grotto with sculptures to recreate a mythological setting, perhaps Polyphemus' cave in the Odyssey. The numinous quality of the grotto is still more ancient, of course: in a grotto near Knossos in Crete, Eileithyia had been venerated even before Minoan palace-building, and farther back in time the immanence of the divine in a grotto is an aspect of the sacred caves of Lascaux.

The word comes from Italian grotta, Vulgar Latin grupta, Latin crypta, (a crypt).[4] It is related by a historical accident to the word grotesque in the following way: in the late 15th century, Romans unearthed by accident Nero's Domus Aurea on the Palatine Hill, a series of rooms underground (as they had become over time), that were decorated in designs of garlands, slender architectural framework, foliations and animals. The Romans who found them thought them very strange, a sentiment enhanced by their 'underworld' source. Because of the situation in which they were discovered, this form of decoration was given the name grottesche or grotesque. 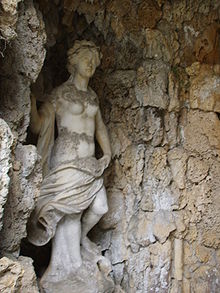 The creation of artificial grottoes was an introduction of Mannerist style to Italian, and then to French, gardens of the mid 16th century. Two famous grottoes in the Boboli Gardens of Palazzo Pitti were begun by Vasari and completed by Ammanati and Buontalenti between 1583 and 1593. One of these grottoes originally housed the Prisoners of Michelangelo. Perhaps still earlier than the Boboli grotto was one in the gardens laid out by Niccolò Tribolo (died 1550) at the Medici Villa Castello, near Florence. At Pratolino, in spite of the dryness of the site, there was a Grotto of Cupid (surviving), with water tricks for the unwary visitor.[5] The Fonte di Fata Morgana ('Fata Morgana's Spring') at Grassina, not far from Florence, is a small garden building, built in 1573-4 as a garden feature in the extensive grounds of the Villa "Riposo" of Bernardo Vecchietti. It is enriched with sculptures in the manner of Giambologna. 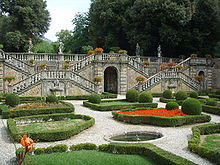 The outside of such grottoes might be architectural or designed like an enormous rock or a rustic porch or rocky overhang; inside one found a temple or fountains, stalactites and even imitation gems and shells (sometimes made in ceramic); herms and mermaids, mythological subjects suited to the space: naiads, or river gods whose urns spilled water into pools. Damp grottoes were cool places to retreat from the Italian sun, but they also became fashionable in the cool drizzle of the Île-de-France; near Moscow, at Kuskovo the Sheremetev estate there is a handsome Summer Grotto, built in 1775.

Grottoes could also serve as baths, as at Palazzo del Tè, where in the 'Casino della Grotta', a small suite of intimate rooms laid out around a grotto and loggetta (covered balcony), courtiers once bathed in the small cascade that splashed over the pebbles and shells encrusted in the floor and walls. 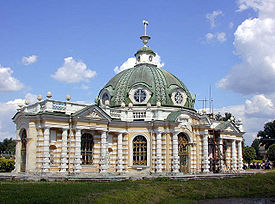 Grottoes have served as chapels, or at Villa Farnese at Caprarola, a little theater designed in the grotto manner. They were often combined with cascading fountains in Renaissance gardens.

The grotto designed by Bernard Palissy for Catherine de' Medici's château in Paris, the Tuileries, was renowned. One also finds grottos in the gardens designed by André Le Nôtre for Versailles. In England, an early garden grotto was built at Wilton House in the 1630s, probably by Isaac de Caus.

Grottoes were eminently suitable for less formal gardening too. Alexander Pope's grotto is almost all that survives of one of the very first landscape gardens in England, at Twickenham.[6] There are grottoes in the famous landscape gardens of Painshill Park,[7] Stowe, Clandon Park and Stourhead.[8] Scott's Grotto is a series of interconnected chambers, extending some 67 ft into the chalk hillside on the outskirts of Ware, Hertfordshire; built during the late 18th century, the chambers and tunnels are lined with shells, flints and pieces of coloured glass [1]. The Romantic generation of tourists might not actually visit Fingal's Cave, located in the isolated Hebrides, but they heard of it, perhaps through Felix Mendelssohn's "Hebrides Overture", better known as "Fingal's Cave," which was inspired by his visit. In the 19th century, when miniature Matterhorns and rock-gardens became fashionable, a grotto might be nearby, as at Ascott House. In Bavaria, Ludwig's Linderhof contains an evocation of the grotto under Venusberg, which figured in Wagner's Tannhäuser.