Nymph
This article is about the creatures of Greek mythology. For other uses, see Nymph (disambiguation). 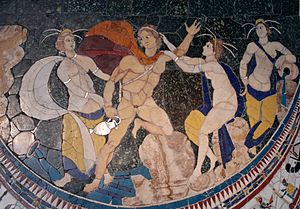 A fourth-century Roman depiction of Hylas and the Nymphs, from the basilica of Junius Bassus

A nymph in Greek mythology is a female minor nature deity typically associated with a particular location or landform. Different from gods, nymphs are generally regarded as divine spirits who animate nature, and are usually depicted as beautiful, young nubile maidens who love to dance and sing; their amorous freedom sets them apart from the restricted and chaste wives and daughters of the Greek polis. They are believed to dwell in mountains and groves, by springs and rivers, and also in trees and in valleys and cool grottoes. Although they would never die of old age nor illness, and could give birth to fully immortal children if mated to a god, they themselves were not necessarily immortal, and could be beholden to death in various forms. Charybdis and Scylla were once nymphs

Other nymphs, always in the shape of young maidens, were part of the retinue of a god, such as Dionysus, Hermes, or Pan, or a goddess, generally the huntress Artemis.[1] Nymphs were the frequent target of satyrs. They are frequently associated with the superior divinities: the huntress Artemis; the prophetic Apollo; the reveller and god of wine, Dionysus; and rustic gods such as Pan and Hermes.

Nymphs are personifications of the creative and fostering activities of nature, most often identified with the life-giving outflow of springs: as Walter Burkert (Burkert 1985:III.3.3) remarks, "The idea that rivers are gods and springs divine nymphs is deeply rooted not only in poetry but in belief and ritual; the worship of these deities is limited only by the fact that they are inseparably identified with a specific locality."

The Greek word νύμφη has "bride" and "veiled" among its meanings: hence a marriageable young woman. Other readers refer the word (and also Latin nubere and German Knospe) to a root expressing the idea of "swelling" (according to Hesychius, one of the meanings of νύμφη is "rose-bud").

The Greek nymphs were spirits invariably bound to places, not unlike the Latin genius loci, and the difficulty of transferring their cult may be seen in the complicated myth that brought Arethusa to Sicily. In the works of the Greek-educated Latin poets, the nymphs gradually absorbed into their ranks the indigenous Italian divinities of springs and streams (Juturna, Egeria, Carmentis, Fontus), while the Lymphae (originally Lumpae), Italian water-goddesses, owing to the accidental similarity of their names, could be identified with the Greek Nymphae. The mythologies of classicizing Roman poets were unlikely to have affected the rites and cult of individual nymphs venerated by country people in the springs and clefts of Latium. Among the Roman literate class, their sphere of influence was restricted, and they appear almost exclusively as divinities of the watery element.

The ancient Greek belief in nymphs survived in many parts of the country into the early years of the twentieth century, when they were usually known as "nereids". At that time, John Cuthbert Lawson wrote: "...there is probably no nook or hamlet in all Greece where the womenfolk at least do not scrupulously take precautions against the thefts and malice of the nereids, while many a man may still be found to recount in all good faith stories of their beauty, passion and caprice. Nor is it a matter of faith only; more than once I have been in villages where certain Nereids were known by sight to several persons (so at least they averred); and there was a wonderful agreement among the witnesses in the description of their appearance and dress."[2]

Nymphs tended to frequent areas distant from humans but could be encountered by lone travelers outside the village, where their music might be heard, and the traveler could spy on their dancing or bathing in a stream or pool, either during the noon heat or in the middle of the night. They might appear in a whirlwind. Such encounters could be dangerous, bringing dumbness, besotted infatuation, madness or stroke to the unfortunate human. When parents believed their child to be nereid-struck, they would pray to Saint Artemidos.[3][4] 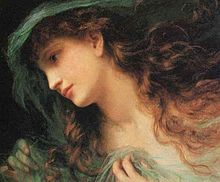 The Head of a Nymph by Sophie Anderson

Due to the depiction of the mythological nymphs as females who mate with men or women at their own volition, and are completely outside male control, the term is often used for women who are perceived as behaving similarly. (For example, the title of the Perry Mason detective novel The Case of the Negligent Nymph (1956) by Erle Stanley Gardner is derived from this meaning of the word.)

The term nymphomania was created by modern psychology as referring to a "desire to engage in human sexual behavior at a level high enough to be considered clinically significant", nymphomaniac being the person suffering from such a disorder. Due to widespread use of the term among lay persons (often shortened to nympho) and stereotypes attached, professionals nowadays prefer the term hypersexuality, which can refer to males and females alike.

The word nymphet is used to identify a sexually precocious girl. The term was made famous in the novel Lolita by Vladimir Nabokov. The main character, Humbert Humbert, uses the term countless times, usually in reference to the title character.

Nymphs who mate with the god Poseidon, are believed to give birth to the mythical creature, cyclops.[5]

As H.J. Rose states, all the names for various classes of nymphs are plural feminine adjectives agreeing with the substantive nymphai, and there was no single classification that could be seen as canonical and exhaustive. Thus the classes of nymphs tend to overlap, which complicates the task of precise classification. Rose mentions dryads and hamadryads as nymphs of trees generally, meliai as nymphs of ash trees, and naiads as nymphs of water, but no others specifically.[6]

Classification by type of dwelling

Hylas and the Nymphs by John William Waterhouse, 1896

The following[7] is not the authentic Greek classification, but is intended simply as a guide: 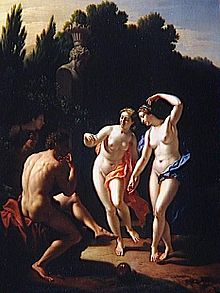 The following is a list of groups of nymphs associated with this or that particular location.[8] Nymphs in such groupings could belong to any of the classes mentioned above (Naiades, Oreades, and so on).

Individual names of some of the nymphs