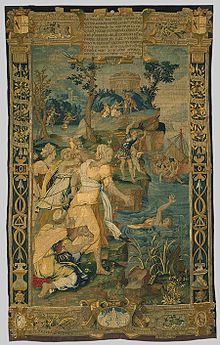 Britomartis (Βριτόμαρτις), was the Minoan goddess of mountains and hunting. She is among the Minoan goddess figures that passed through the Mycenaeans' culture into classical Greek mythology, with transformations that are unclear in both transferrals.[1] For the Greeks Britomartis (Cretan dialect[2] for "sweet maiden", "sweet virgin"[3]) or Diktynna (derived by Hellenistic writers as from diktya, "hunting nets")[4] was a mountain nymph (an oread) whom Greeks recognized also in Artemis and in Aphaea, the "invisible" patroness of Aegina.[5]

Britomartis ("sweet maid") is an epithet that does not reveal the goddess's name,[6] nor her character, for it has the ring of an apotropaic euphemism.[7] The goddess addressed as "Britomartis" was worshipped in Crete as an aspect of Potnia, the "Mistress". The oldest aspect of the Cretan goddess was as Mother of Mountains, who appears on Minoan seals with the demonic features of a Gorgon, accompanied by the double-axes of power and gripping divine snakes. Her terror-inspiring aspect was softened by calling her Britomartis, the "good virgin", a euphemism to allay her dangerous aspect.

Every element of the classical myths that told about Britomartis served to reduce her power and scope, even literally to entrap her in nets (but only because she "wanted" to be entrapped). The traditional patriarchal bias of Greek writers even made her the "daughter" of Zeus (see below), rather than his patroness when he was an infant in her cave on Mount Dikte, and they made her own tamed, "evolved" and cultured Olympian aspect, the huntress Artemis, responsible for granting Britomartis status as a goddess, a mythic inversion expressed by the Romanized Greek Pausanias, in the 2nd century CE: "She was made a goddess by Artemis," Pausanias asserts (2.30.3), "and she is worshipped, not only by the Cretans but also by the Aiginetans" (see Aphaea, below). But the ancient goddess never quite disappeared and remained on the coins of Cretan cities, as herself or as Diktynna, the goddess of Mount Dikte, Zeus' birthplace. As Diktynna, winged and now represented with a human face, she stood on her ancient mountain, and grasped an animal in each hand, in the guise of Potnia Theron, the mistress of animals. The Greeks could only conceive a mistress of animals as a huntress, but on the early seals she suckles griffons. Archaic representations of winged Artemis show that she evolved from Potnia Theron.

By Hellenistic and Roman times, Britomartis was given a genealogical setting that fitted her into a Classical context:

"Britomartis, who is also called Diktynna, the myths relate, was born at Kaino in Crete of Zeus and Karme,[8] the daughter of Euboulos who was the son of Demeter; she invented the nets [diktya] which are used in hunting."[9]

The third hymn to Artemis by Callimachus tells how she was pursued by Minos and, as Diktynna, "Lady of the Nets", threw herself into fishermen's nets to escape him; thus rescued, she was taken by the fishermen to mainland Greece. She was also known as Dicte. This myth element "explains" the spread of the Cretan goddess's cult to Greece. Didorus Siculus found it less than credible: "But those men who tell the tale that she has been named Diktynna because she fled into some fishermen’s nets when she was pursued by Minos, who would have ravished her, have missed the truth; for it is not a probable story that the goddess should ever have got into so helpless a state that she would have required the aid that men can give, being as she is the daughter of the greatest one of the gods."[10] Strabo notes she was venerated as Diktynna only in western Crete, in the region of Cydonia, where there was a Diktynnaion , or temple of Diktynna. "Oupis [Artemis], O queen, fairfaced Bringer of Light, thee too the Kretans name after that Nymph," Callimachus says. "She passed her time in the company of Artemis, this being the reason why some men think Diktynna and Artemis are one and the same goddess," Diodorus Siculus (5.76.3) suggested.

In Minoan art, and on coins, seals and rings and the like throughout Greece, Britomartis is depicted with demonic features, carrying a double-handed axe and accompanied by feral animals.

A xoanon, a cult wooden statue, of Britomartis, made by Daedalus, sat in the temple of Olous. In Chersonesos and Olous, she was often portrayed on coins, showing that she was worshipped in those cities; the festival Britomarpeia was held in her honor. As Diktynna, her face was pictured on Cretan coins of Kydonia, Polyrrhenia and Phalasarna as the nurse of Zeus. On Crete, she was connected with the mountain where Zeus was said to have been born--Mount Dikte. On some early Britomartis coins of Kydonia, the coin was manufactured as an overstrike of specimens manufactured by Aegina.[11] Temples dedicated to her existed in Athens, Sparta, Massalia and between Ambrosus and Anticyra in Phocis,[12] where, as Artemis Diktynna, her cult object was a black stone worked by Aeginetans,[13] but she was primarily a goddess of local importance in Western Crete, such as Lysos and West of Kydonia. Her temples were said to be guarded by vicious dogs stronger than bears.[14] A temple dedicated to the goddess was erected in ancient times on Mount Tityros near Cydonia.[11]

Britomartis was worshipped as Aphaea (Pausanias, 2.30.3) primarily on the island of Aegina in Mycenaean times, where the temple "Athena Aphaea"[15] was later located. With the coming of Athenian control over Aegina, a temple to her also existed on the outskirts of Athens, at the Aspropyrgos.

Britomart figures in Edmund Spenser's knightly epic The Faerie Queene, where she is an allegorical figure of the virgin Knight of Chastity, representing English virtue—in particular, English military power—through a folk etymology that associated Brit-, as in Briton, with Martis, here thought of as "of Mars", the Roman war god. In Spenser's allegory, Britomart connotes the Virgin Queen, Elizabeth I of England.

In his retelling of the King Arthur legends, Arthur Rex, author Thomas Berger suggests that Queen Guinevere may have become a powerful female knight known as Britomart after the death of the King.

A warrior version of Britomart appears alongside Robin Hood and his men in "The Last Castle," an installment of the Eisner-award-winning graphic novel Fables.

She is mentioned in the beginning of A S Byatt's novel The Virgin in the Garden where, the Poet-Playwright character Alexander Wedderburn likens Lady Antonia Fraser to Belphoebe and the heroine of the Quartet,( consisting of the novelsThe Virgin in the Garden, Still Life, Babel Tower & A Whistling Woman ), Frederica Potter to "Britomart" .