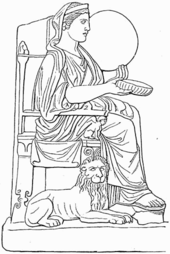 /ˈriːə/; Ancient Greek: Ῥέα) was the Titaness daughter of Uranus, the sky, and Gaia, the earth, in Greek mythology. She was known as "the mother of gods". In earlier traditions, she was strongly associated with Gaia and Cybele, the Great Goddess, and was later seen by the classical Greeks as the mother of the Olympian gods and goddesses, though never dwelling permanently among them on Mount Olympus. The Romans identified Rhea with the Goddess Ops.

Cronus, Rhea's Titan brother and husband, castrated their father, Uranus. After this, Cronus re-imprisoned the Hekatonkheires, the Gigantes and the Cyclopes and set the monster Campe to guard them. He and Rhea took the throne as King and Queen of the gods. This time was called the Golden Age.

If Rhea is indeed Greek, most ancient etymologists derive Rhea ('Ρέα) by metathesis from έρα "ground",[1] but a tradition embodied in Plato[2] and in Chrysippus[3] connected the word with "ῥέω" (rheo), "flow", "discharge",[4] which is what LSJ supports.[5] Alternatively, the name Rhea may be connected with words for the pomegranate, ῥόα, later ῥοιά. Mythographer Karl Kerenyi suggested that the consonance might ultimately derive from a deeper, pre-Indo-European language layer: indeed the sign combination RU+JA meaning 'pomegranate' is attested in Linear A.

The name of the bird species rhea is derived from the goddess name Rhea.[6]

The second largest moon of the planet Saturn is named after her.

Cronus sired six children by Rhea: Hestia, Hades, Demeter, Poseidon, Hera and Zeus in that order, but swallowed them all as soon as they were born except Zeus, since he had learned from Gaia and Uranus that he was destined to be overcome by his own child as he had overthrown his own father. When Zeus was about to be born, however, Rhea sought Uranus and Gaia to devise a plan to save him, so that Cronus would get his retribution for his acts against Uranus and his own children. Rhea gave birth to Zeus in Crete, handing Cronus a stone wrapped in swaddling clothes, which he promptly swallowed.

Then she hid Zeus in a cave on Mount Ida in Crete. According to varying versions of the story:

Zeus forced Cronus to disgorge the other children in the reverse order in which they had been swallowed, the oldest becoming the last, and youngest: first the stone, which was set down at Pytho under the glens of Parnassus to be a sign to mortal men, then the rest. In some versions, Metis gave Cronus an emetic to force him to disgorge the babies, or Zeus cut Cronus' stomach open. Then Zeus released the brothers of Cronus, the Gigantes, the Hecatonkheires and the Cyclops, who gave him thunder and lightning, which had previously been hidden by Gaia. Zeus and his siblings, together with the Gigantes, Hecatonkheires, and Cyclopes, overthrew Cronus and the other Titans. Similarly, in later myths, Zeus would swallow Metis to prevent the birth of Athena, but she was born unharmed, bursting out of his head in full armor.

The original seat of Rhea's worship was in Crete. There, according to myth, she saved the new-born Zeus, her sixth child, from being devoured by Cronus, by substituting a stone for the infant god and entrusting him to the care of her attendants the Curetes. These attendants afterwards became the bodyguard of Zeus and the priests of Rhea, performing ceremonies in her honor.

In historic times, the resemblances between Rhea and the Asiatic Great Mother, Phrygian Cybele, a manifestation of the Great Goddess, were so noticeable that the Greeks accounted for them by regarding the latter as their own Rhea, who had deserted her original home in Crete and fled to the mountain wilds of Asia Minor to escape the persecution of Cronus.[7] A reverse view was expressed by Virgil,[8] and it is probably true that cultural contacts with the mainland brought to Crete the worship of the Asiatic Great Mother, who became the Cretan Rhea.

In art, Rhea is usually depicted seated in a throne flanked by lions or on a chariot drawn by two lions, and is not always distinguishable from Cybele. In Roman mythology, her counterpart Cybele was Magna Mater deorum Idaea and identified with Ops or Opis.

Most often Rhea's symbol is a pair of lions, the ones that pulled her celestial chariot and were seen often, rampant, one on either side of the gateways through the walls to many cities in the ancient world. The one at Mycenae is most characteristic, with the lions placed on either side of a pillar that symbolizes the goddess.

In the dry stone Cyclopean masonry of the Lion Gate of the Mycenae acropolis, the pillar flanked by lions represents the deity.

In Homer, Rhea is the mother of the gods, though not a universal mother like Cybele, the Phrygian Great Mother, with whom she was later identified.

In the Argonautica by Apollonius of Rhodes, the fusion of Rhea and Phrygian Cybele is complete. "Upon the Mother depend the winds, the ocean, the whole earth beneath the snowy seat of Olympus; whenever she leaves the mountains and climbs to the great vault of heaven, Zeus himself, the son of Cronus, makes way, and all the other immortal gods likewise make way for the dread goddess," the seer Mopsus tells Jason in Argonautica; Jason climbed to the sanctuary high on Mount Dindymon to offer sacrifice and libations to placate the goddess, so that the Argonauts might continue on their way. For her temenos they wrought an image of the goddess, a xoanon, from a vine-stump. There "they called upon the mother of Dindymon, mistress of all, the dweller in Phrygia, and with her Titias and Kyllenos who alone of the many Cretan Daktyls of Ida are called 'guiders of destiny' and 'those who sit beside the Idaean Mother'." They leapt and danced in their armour: "For this reason the Phrygians still worship Rhea with tambourines and drums".[9]