Polyphemus, by Johann Heinrich Wilhelm Tischbein, 1802 (Landesmuseum Oldenburg)
This article is about the mythical creature. For other uses, see Cyclops (disambiguation).

/ˈsaɪklɒps/; Greek: Κύκλωψ, Kuklōps; plural cyclopes /saɪˈkloʊpiːz/; Greek: Κύκλωπες, Kuklōpes), in Greek mythology and later Roman mythology, was a member of a primordial race of giants, each with a single eye in the middle of his forehead.[1] The name is widely thought to mean "circle-eyed".[2]

Hesiod described one group of cyclopes and the epic poet Homer described another, though other accounts have also been written by the playwright Euripides, poet Theocritus and Roman epic poet Virgil. In Hesiod's Theogony, Zeus releases three Cyclopes, the sons of Uranus and Gaia, from the dark pit of Tartarus. They provide Zeus' thunderbolt, Hades' helmet of invisibility, and Poseidon's trident, and the gods use these weapons to defeat the Titans. In a famous episode of Homer's Odyssey, the hero Odysseus encounters the Cyclops Polyphemus, the son of Poseidon and Thoosa (a nereid), who lives with his fellow Cyclopes in a distant country. The connection between the two groups has been debated in antiquity and by modern scholars.[3] It is upon Homer's account that Euripides and Virgil based their accounts of the mythical creatures.

Various ancient Greek and Roman authors wrote about the cyclopes. Hesiod described them as three brothers who were primordial giants. All the other sources of literature about the cyclopes describe the cyclops Polyphemus, who lived upon an island populated by the creatures. 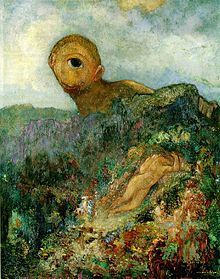 In the Theogony by Hesiod, the Cyclopes – Brontes ("thunderer"), Steropes ("lightning") and the "bright" Arges (Greek: Ἄργης, Βρόντης, and Στερόπης) – were the primordial sons of Uranus (Sky) and Gaia (Earth) and brothers of the Hecatonchires.[5] They were giants with a single eye in the middle of their forehead and a foul disposition. According to Hesiod, they were strong, stubborn, and "abrupt of emotion". Collectively they eventually became synonyms for brute strength and power, and their name was invoked in connection with massive masonry. They were often pictured at their forge.

Uranus, fearing their strength, locked them in Tartarus. Cronus, another son of Uranus and Gaia, later freed the Cyclopes, along with the Hecatonchires, after he had overthrown Uranus. Cronus then placed them back in Tartarus, where they remained, guarded by the female dragon Campe, until freed by Zeus. They fashioned thunderbolts for Zeus to use as weapons, and helped him overthrow Cronus and the other Titans. The lightning bolts, which became Zeus's main weapons, were forged by all three Cyclopes, in that Arges added brightness, Brontes added thunder, and Steropes added lightning.

According to a hymn of Callimachus,[6] they were Hephaestus' helpers at the forge. The Cyclopes were said to have built the "cyclopean" fortifications at Tiryns and Mycenae in the Peloponnese. The noises proceeding from the heart of volcanoes were attributed to their operations.

According to Alcestis by Euripides, Apollo killed the Cyclopes, in retaliation for Asclepius's murder at the hands of Zeus. According to Euripides' play Alkestis, Apollo was then forced into the servitude of Admetus for one year. Zeus later returned Asclepius and the Cyclopes from Hades.

The Sicilian Greek poet Theocritus wrote two poems circa 275 BC concerning Polyphemus' desire for Galatea, a sea nymph. When Galatea instead married Acis, a Sicilian mortal, a jealous Polyphemus killed him with a boulder. Galatea turned Acis' blood into a river of the same name in Sicily.

Virgil's account acts as a sequel to Homer's, with the fate of Polyphemus as a blind cyclops after the escape of Odysseus and his crew. 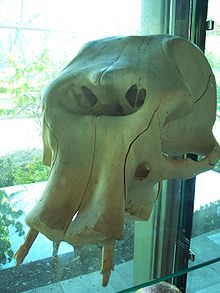 Skull of a dwarf elephant displayed in the zoo of Munich, Germany.

Walter Burkert among others suggests that the archaic groups or societies of lesser gods mirror real cult associations: "it may be surmised that smith guilds lie behind Cabeiri, Idaian Dactyloi, Telchines, and Cyclopes."[7] Given their penchant for blacksmithing, many scholars believe the legend of the Cyclopes' single eye arose from an actual practice of blacksmiths wearing an eyepatch over one eye to prevent flying sparks from blinding them in both eyes. The Cyclopes seen in Homer's Odyssey are of a different type from those in the Theogony and they have no connection to blacksmithing. It is possible that independent legends associated with Polyphemus did not make him a Cyclops before Homer's Odyssey; Polyphemus may have been some sort of local daemon or monster originally.

Another possible origin for the Cyclops legend, advanced by the paleontologist Othenio Abel in 1914,[8] is the prehistoric dwarf elephant skulls – about twice the size of a human skull – that may have been found by the Greeks on Cyprus, Crete, Malta and Sicily. Abel suggested that the large, central nasal cavity (for the trunk) in the skull might have been interpreted as a large single eye-socket.[9] Given the inexperience of the locals with living elephants, they were unlikely to recognize the skull for what it actually was.[10]

Veratrum album, or white hellebore, an herbal medicine described by Hippocrates before 400 BC,[11] contains the alkaloids cyclopamine and jervine, which are teratogens capable of causing cyclopia and holoprosencephaly. Students of teratology have raised the possibility of a link between this developmental deformity in infants and the myth for which it was named.[12] Regardless of the connection between the herb and the birth abnormalities, it is possible these rare birth defects may have contributed to the myth. 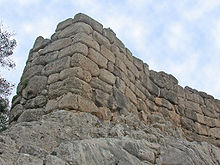 After the "Dark Age", when Hellenes looked with awe at the vast dressed blocks, known as Cyclopean structures, which had been used in Mycenaean masonry (at sites such as Mycenae and Tiryns or on Cyprus), they concluded that only the Cyclopes had the combination of skill and strength to build in such a monumental manner. 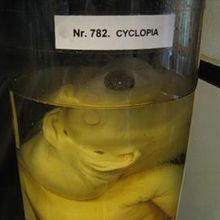 A case of cyclopia from the Old Anatomical Theater of Tartu, Estonia. 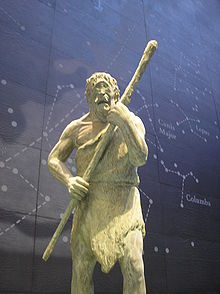 Statue of a Cyclops at the Natural History Museum in London