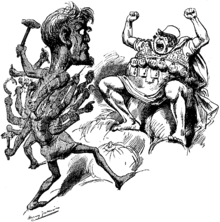 The Hecatonchire Briareos used as an allegory of the multiple threat of labour unrest to Capital in a political cartoon, 1890

(listen) (help·info) "Hundred-Handed Ones," Latinised Centimani), were figures in an archaic stage of Greek mythology, three giants of incredible strength and ferocity that surpassed that of all Titans whom they helped overthrow. Their name derives from the Greek ἑκατόν (hekaton; "hundred") and χείρ (kheir; "hand"), "each of them having a hundred hands and fifty heads" (Bibliotheca). Hesiod's Theogony (624, 639, 714, 734–35) reports that the three Hekatonkheires became the guards of the gates of Tartarus.

In Virgil's Aeneid (10.566-67), in which Aeneas is likened to one of them, Briareus (known here as Aegaeon), they fought on the side of the Titans rather than the Olympians; in this Virgil was following the lost Corinthian epic Titanomachy rather than the more familiar account in Hesiod.

Other accounts make Briareus or Aegaeon one of the assailants of Olympus, who, after his defeat, was buried under Mount Aetna (Callimachus, Hymn to Delos, 141).

According to Hesiod, the Hekatonkheires were children of Gaia (Earth) and Uranus (sky).[1][2] They were thus part of the very beginning of things (Kerenyi 1951:19) in the submerged prehistory of Greek myth, though they played no known part in cult. Their names were Briareus (Βριάρεως) the Vigorous, also called Aigaion (Αἰγαίων), Latinised as Aegaeon, the "sea goat", Cottus (Κόττος) the Striker or the Furious, and Gyges (Γύγης) or Gyes (Γύης) the Big-Limbed. If some natural phenomena are symbolised by the Hekatoncheires then they may represent the gigantic forces of nature that appear in earthquakes and other convulsions or in the motion of sea waves (Mayer, Die Giganten und Titanen, 1887).

Soon after they were born their father Uranus threw them into the depths of Tartarus because he saw them as hideous monsters. In some versions Uranus saw how ugly the Hekatonkheires were at their birth and pushed them back into Gaia's womb, upsetting Gaia greatly, causing her great pain and setting into motion the overthrow of Uranus by Cronus, who later imprisoned them in Tartarus.

The Hekatonkheires remained there, guarded by the dragon Campe, until Zeus rescued them, advised by Gaia that they would serve as good allies against Cronus and the Titans. During the War of the Titans the Hekatonkheires threw rocks as big as mountains, one hundred at a time, at the Titans, overwhelming them.

In a Corinthian myth related in the second century CE to Pausanias (Description of Greece ii. 1.6 and 4.7), Briareus was the arbitrator in a dispute between Poseidon and Helios, between sea and sun: he adjudged the Isthmus of Corinth to belong to Poseidon and the acropolis of Corinth (Acrocorinth) sacred to Helios.

Scholia on Apollonius of Rhodes (i. 1165) represent Aegaeon as a son of Gaea and Pontus, the Sea, ruling the fabulous Aegaea in Euboea, an enemy of Poseidon and the inventor of warships. In Ovid's Metamorphoses (ii. 10) and in Philostratus' Life of Apollonius of Tyana (iv. 6) (Theoi.com) he is a marine deity. Hesiod reconciles the archaic Hekatonkheires with the Olympian pantheon by making Briareos the son-in-law of Poseidon who gave him "Kymopoliea his daughter to wed." (Theogony, 817).

Briareus is mentioned in the Divine Comedy poem Inferno as one of the Giants in the Ninth Circle of Hell (Inferno XXXI.99).

The giant is also mentioned in Cervantes' Don Quixote, in the famous episode of the windmills.

Briareos is mentioned in Book I of John Milton's Paradise Lost alongside Typhon as an analogue to the fallen Satan.

Briareus is mentioned in The History of Tom Jones, a Foundling, by Henry Fielding, in a conversation between Tom Jones and Mr. Partridge (Book 8, Chapter IX).

In Don Juan (Canto VI), Byron makes a slightly crude joke, musing whether "enviable Briareus...with thy hands and heads.. hads't all things multiplied in proportion" (this thought arising from Byron's assertion of his love of all womankind in the previous canto).

Briareos Hecatonchires is also a character in the Anime and Manga Appleseed, where he plays a human who has been transformed into a Hecatonchire cyborg body, which also allows him to remotely control 100 systems. This is one of the many references to Greek mythology in the series, including Cottus (another cyborg) and Gyges (the brand name of a robot-shaped vehicle).

Briares appears in the Percy Jackson & the Olympians novel The Battle of the Labyrinth. He was imprisoned in a part of the Labyrinth that corresponds to Alcatraz and again guarded by Kampe. His brothers have died when no one remembered them causing him to give up hope and refuse the chance to escape his prison. He eventually overcomes his despair and fights against the Titans again.

A summonable entity (or eidolon) in Final Fantasy XIII is called Hecatoncheir and is summonable by Oerba Dia Vanille. It is the earth element summon, and the last to be obtained.

It is also a monster in Dungeons & Dragons, that is commonly used by deities to kill other gods, keeping in line with the power of the Hekatonkheires and their strength.

In Ace Combat 6, there are three massive airborne weapons systems types named after and based upon the Hekatonkheires. The Aigaion-class airborne aircraft carrier, the Gyges-class electronic combat craft, and the Kottos-class anti-air weapon combat craft.

In Bayonetta, she can summon a demon called Hecatoncheir (though only six of the hands ever appear), usually to play volleyball using enemies as the ball, before crushing them between their fists.

The Black/Death metal band Centimani, from Colorado, has taken the latin form of Hekatonkheires as its name.

In the Ghost in the Shell episode, "Decoy," many-handed robots were referenced by Ishikawa using the name, "Hecatoncheires."

In Dan Simmons Olympos, the god Hephaestos tells Achilles that the monster Setebos was called Briareos by the olympian gods and Aegaeon by the early humans.

In the Video Game Lord of Arcana , it is called Hecatonheir, who looks like a Large and Fat Centaur with Two gigantic arms wielding a Great sword in its right arm and a Shield in its left arm.

In Promethean: the Created, the name Centimani is applied to Created who choose to forsake the pursuit of humanity and become deliberately monstrous. The names of the three Hekatonkheires are also used as terms for different varieties of related monsters known as Precipitati.