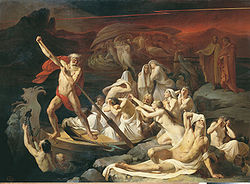 A 19th-century interpretation of Charon's crossing by Alexander Litovchenko.

In Greek mythology, Charon or Kharon (English pronunciation: /ˈkɛərɒn/, /ˈkɛərən/; Greek Χάρων) is the ferryman of Hades who carries souls of the newly deceased across the rivers Styx and Acheron that divided the world of the living from the world of the dead. A coin to pay Charon for passage, usually an obolus or danake, was sometimes placed in or on the mouth of a dead person.[1] Some authors say that those who could not pay the fee, or those whose bodies were left unburied, had to wander the shores for one hundred years. In the catabasis mytheme, heroes — such as Heracles, Orpheus, Aeneas, Dionysus and Psyche — journey to the underworld and return, still alive, conveyed by the boat of Charon.

The name Charon is most often explained as a proper noun from χάρων (charon), a poetic form of χαρωπός (charopós), “of keen gaze”, referring either to fierce, flashing, or feverish eyes, or to eyes of a bluish-gray color. The word may be a euphemism for death.[2] Flashing eyes may indicate the anger or irascibility of Charon as he is often characterized in literature, but the etymology is not certain. The ancient historian Diodorus Siculus thought that the ferryman and his name had been imported from Egypt.[3] 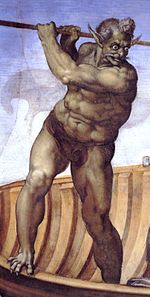 Charon as depicted by Michelangelo

Charon is depicted frequently in the art of ancient Greece. Attic funerary vases of the 5th and 4th centuries BC. are often decorated with scenes of the dead boarding Charon’s boat. On the earlier such vases, he looks like a rough, unkempt Athenian seaman dressed in reddish-brown, holding his ferryman's pole in his right hand and using his left hand to receive the deceased. Hermes sometimes stands by in his role as psychopomp. On later vases, Charon is given a more “kindly and refined” demeanor.[4]

In the 1st century BC., the Roman poet Virgil describes Charon in the course of Aeneas’s descent to the underworld (Aeneid, Book 6), after the Cumaean Sibyl has directed the hero to the golden bough that will allow him to return to the world of the living:

There Chairon stands, who rules the dreary coast -
A sordid god: down from his hairy chin
A length of beard descends, uncombed, unclean;
His eyes, like hollow furnaces on fire;
A girdle, foul with grease, binds his obscene attire.[5]

Other Latin authors also describe Charon, among them Seneca in his tragedy Hercules Furens, where Charon is described in verses 762-777 as an old man clad in foul garb, with haggard cheeks and an unkempt beard, a fierce ferryman who guides his craft with a long pole. When the boatman tells Hercules to halt, the Greek hero uses his strength to gain passage, overpowering Charon with the boatman's own pole.[6]

In the second century, Lucian employed Charon as a figure in his Dialogues of the Dead, most notably in Parts 4 and 10 (“Hermes and Charon” and “Charon and Hermes”).[7] 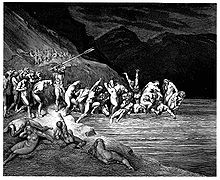 In the Divine Comedy, Charon forces reluctant sinners onto his boat by beating them with his oar. (Gustave Doré, 1857)

In the 14th century, Dante Alighieri described Charon in his Divine Comedy, drawing from Virgil's depiction in Aeneid 6. Charon is the first named mythological character Dante meets in the underworld, in the third canto of Inferno. Elsewhere, Charon appears as a cranky, skinny old man or as a winged demon wielding a double hammer, although Michelangelo's interpretation, influenced by Dante's depiction in Inferno, canto 3, shows him with an oar over his shoulder, ready to beat those who delay (“batte col remo qualunque s'adagia”, Inferno 3, verse 111).[8] In modern times, he is commonly depicted as a living skeleton in a cowl, much like the Grim Reaper.

Most accounts, including Pausanias (10.28) and later Dante's Inferno (3.78), associate Charon with the swamps of the river Acheron. Ancient Greek literary sources — such as Pindar, Aeschylus, Euripides, Plato, and Callimachus — also place Charon on the Acheron. Roman poets, including Propertius, Ovid, and Statius, name the river as the Styx, perhaps following the geography of Virgil’s underworld in the Aeneid, where Charon is associated with both rivers.[9]

"Haros" is the modern Greek equivalent of Charon, and usage includes the curse "you will be eaten (i.e. taken) by Haros", or "I was in the teeth of Haros" (i.e. " I was near death/very sick/badly injured.") During the Korean War, the Greek Expeditionary Force defended an outpost called Outpost Harry.[citation needed] The Greek soldiers who witnessed what was going on between the 10 and 16 June 1953, before they were due to go on to the hill on the 16th, referred to it as "Outpost Haros".[citation needed]