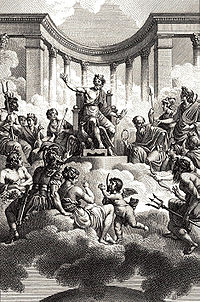 The Twelve Olympians by Monsiau, circa late 18th century.

The Twelve Olympians, also known as the Dodekatheon (Greek: Δωδεκάθεον < δώδεκα,[1][2] dōdeka, "twelve"+ θεοί, theoi, "gods"), in Greek mythology, were the principal deities of the Greek pantheon, residing atop Mount Olympus. Zeus, Hera, Poseidon, Demeter, Aphrodite, and Hades were siblings. Ares, Hermes, Hephaestus, Athena, Apollo, and Artemis were children of Zeus. Some versions of the myths state that Athena was born of Zeus alone, or that Hephaestus was born of Hera alone. The Olympians gained their supremacy in a war of gods in which Zeus led his siblings to victory over the Titans.

The first ancient reference of religious ceremonies for them is found in the Homeric Hymn to Hermes. The Greek cult of the Twelve Olympians can be traced to the 6th century BC Athens and probably has no precedent in the Mycenaean period. The altar to the Twelve Olympians at Athens is usually dated to the archonship of the younger Pesistratos, in 522/521 BC. The concept of the "Twelve Gods" is older than any of our Greek or Roman sources, and is likely of Anatolian origin. There seems to have been a great deal of fluidity when it came to who was counted among their number in antiquity.[3]

The classical scheme of the Twelve Olympians (the Canonical Twelve of art and poetry) comprises the following gods:

Hades (Roman: Pluto) was not generally included in this list. He did not have a seat in the pantheon because he spent almost all of his time in the underworld, in which he was the king. The respective Roman scheme as given by Ennius gives the Roman equivalents of these Greek gods,[4] but replaces Dionysus (Bacchus) with Hestia (Vesta) so as to list six gods and six goddesses. The difference in the list is explained[by whom?] by the story that when Dionysus was offered a seat among the Olympians, the total number of Olympians became thirteen. Believing this would create a fight amongst the gods, Hestia selflessly stepped down, and is sometimes considered a minor god because of this.[citation needed]

Herodotus included in his Dodekatheon the following deities: Zeus, Hera, Poseidon, Hermes, Athena, Apollo, Alpheus, Cronus, Rhea and the Charites.[5][6] Herodotus also includes Heracles as one of the Twelve.[clarification needed][7] Lucian also includes Heracles and Asclepius as members of the Twelve, without explaining which two had to give way for them. At Kos, Heracles and Dionysus are added to the Twelve, and Ares and Hephaestus are left behind.[8] However, Pindar, Apollodorus,[9] and Herodorus disagree with this. For them Heracles is not one of the Twelve Gods, but the one who established their cult.[5] Hebe, Helios, Eros (a.k.a. Cupid), Selene and Persephone are other important gods and goddesses which are sometimes included in a group of twelve. Eros is often depicted alongside the other twelve, especially his mother Aphrodite, but is rarely considered one of the Olympians.

Plato connected the Twelve Olympians with the twelve months, and proposed that the final month be devoted to rites in honor of Hades and the spirits of the dead, implying that he considered Hades to be one of the Twelve.[10] Hades is phased out in later groupings due to his chthonic associations.[11] In Phaedrus Plato aligns the Twelve with the Zodiac and would exclude Hestia from their rank.[12]

In ancient Greek culture the "Olympian Gods" and the "Cults of Twelve Gods" were often relatively distinct concepts.[13]

The twelve gods and goddesses listed among the Twelve most often.[citation needed]

The following gods and goddess are sometimes mentioned amongst the twelve Olympians.

Close to the Olympians

The following gods, goddesses, and demigods were not usually counted as Olympians, although they had close ties to them.