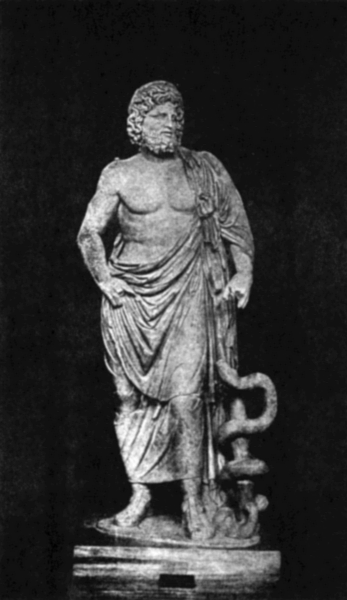 Asclepius (pronounced IPA|, Greek polytonic|Ἀσκληπιός, transliterated "Asklēpiós"; Aesculapius) is the god of and healing in ancient . Asclepius represents the healing aspect of the medical arts, while his daughters , , , , Aglæa/Ægle and (literally, "all-healing") symbolize the forces of cleanliness, medicine, and healing, respectively.

The etymology of the name is unknown. In his revised version of Frisk's "Griechisches etymologisches Wörterbuch", R.S.P. Beekes gives this summary of the different attempts [ [http://www.indoeuropean.nl/cgi-bin/startq.cgi?flags=endnnnl&root=leiden&basename=%5Cdata%5Cie%5Cgreek dataiegreek: Database query ] ] :

:"H. Grégoire (with R. Goossens and M. Mathieu) in "Asklépios, Apollon Smintheus et Rudra" 1949 (Mém. Acad. Roy. de Belgique. Cl. d. lettres. 2. sér. 45), explains the name as 'the mole-hero', connecting Polytonic|σκάλοψ, ἀσπάλαξ 'mole' and refers to the resemblance of the in Epidauros and the building of a mole. (Thus Puhvel, "Comp. Mythol". 1987, 135.) But the variants of Asklepios and those of the word for 'mole' do not agree.:The name is typical for Pre-Greek words; apart from minor variations (Polytonic|β for Polytonic|π, Polytonic|αλ(α) for Polytonic|λα) we find Polytonic|α/αι (a well known variation; Fur. 335 - 339) followed by Polytonic|-γλαπ- or Polytonic|-σκλαπ-/-σχλαπ/β-, i.e. a voiced velar (without Polytonic|-σ-) or a voiceless velar (or an aspirated one: we know that there was no distinction between the three in the substr. language) with a Polytonic|-σ-. I think that the Polytonic|-σ- renders an original , which (prob. as Polytonic|δ) was lost before the Polytonic|-γ- (in Greek the group Polytonic|-σγ- is rare, and certainly before another consonant); [http://www.indoeuropean.nl/ied/pdf/pre-greek.pdf Beekes Pre-Greek] .:Szemerényi's etymology ("JHS" 94, 1974, 155) from Hitt. "assula(a)-" 'well-being' and "piya-" 'give' cannot be correct, as it does not explain the velar."

One might add that even though Szemerényi's etymology (Hitt. "asula-" + "piya-") does not account for the velar, it is perhaps inserted spontaneously in Greek due to the fact that the cluster "-sl-" was uncommon in Greek: so, *"Aslāpios" would become *"Asklāpios" automatically.

Associated with the Roman/Etruscan god .

He was the son of and Koronis (Coronis). His mother died in labour and was laid out on a funeral pyre to be consumed, but the unborn child was rescued from her womb. From this he received the name Asklepios "to cut open." [(http://www.theoi.com/Ouranios/Asklepios.html)]

Apollo carried the babe to the centaur Kheiron who raised Asclepius and instructed him in the art of medicine [Pindar, Pythian Ode 3. 5 ff (trans. Conway) (Greek lyric C5th B.C.) ]

Asclepius' most famous sanctuary was in in Northeastern . Another famous "asclepieion" was on the island of , where , the legendary doctor, may have begun his career. Other asclepieions were situated in , (in Arcadia), and in Asia.

In honor of Asclepios, snakes were often used in healing rituals. Non-venomous snakes were left to crawl on the floor in dormitories where the sick and injured slept. Starting about , the cult of Asclepios grew very popular. His healing temples were called ; pilgrims flocked to them to be healed. They slept overnight and reported their dreams to a priest the following day. He prescribed a cure, often a visit to the baths or a gymnasium.

It is also written by Lewis Farnell, that some healing temples used sacred dogs to lick the wounds of the sick petitioners. rf|1|Farnell1

The original, ancient begins with the invocation "I swear | by Apollo the Physician and by Asclepius and by Hygieia and Panacea and by all the gods . . ." Scholars have written that this oath may not have been written by Hippocrates, but by or with others in his school, or followers of . rf|2|Farnell2

Some later religious movements claimed links to Asclepios. In the 2nd Century AD The False Prophet Alexander claimed that his god was an incarnation of Asclepios.

The botanical genus "" (commonly known as milkweed), is named after him, and includes the medicinal plant "A. tuberosa" or "Pleurisy root".