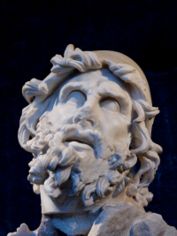 Head of Odysseus from a Greek 2nd century BC marble group representing Odysseus blinding Polyphemus, found at the villa of Tiberius at Sperlonga

/oʊˈdɪsiəs/ or /oʊˈdɪsjuːs/; Greek: Ὀδυσσεύς, Odusseus) or Ulysses (/juːˈlɪsiːz/; Latin: Ulyssēs, Ulixēs) was a legendary Greek king of Ithaca and the hero of Homer's epic poem the Odyssey. Odysseus also plays a key role in Homer's Iliad and other works in the Epic Cycle.

King of Ithaca, husband of Penelope, father of Telemachus, and son of Laërtes and Anticlea, Odysseus is renowned for his guile and resourcefulness, and is hence known by the epithet Odysseus the Cunning (mētis, or "cunning intelligence"). He is most famous for the ten eventful years he took to return home after the ten-year Trojan War and his famous Trojan Horse trick.

The etymology of the name is contested, according to one view, the name Odysseus derives from the verb odussomai (ὀδύσσομαι), meaning "to be wroth against', 'hate", suggesting that the name could be rendered as "the one who is wrathful/hated".[2][3][4][5][6][7] Alternatively, it has been also suggested that this is of non-Greek origin and probably of non-Indo-European origin too, while it is of an unknown etymology.[8]

In the Iliad and Odyssey there are several epithets to describe Odysseus. In Odyssey 19, in which Odysseus's early childhood is recounted, Euryclea asks Autolycus, to name him. Euryclea tries to guide him to naming the boy Polyaretos, "for he has much been prayed for" (19.403f).[9] In Greek, however, Polyaretos can also take the opposite meaning: much accursed. Autolycus seems to infer this connotation of the name and accordingly names his grandson Odysseus. Odysseus often receives the patronymic epithet Laertiades (Greek: Λαερτιάδης), son of Laërtes.