Olympia (Greek: Ολυμπία Olympía), a sanctuary of ancient Greece in Elis, is known for having been the site of the Olympic Games in classical times, comparable in importance to the Pythian Games held in Delphi. Both games were held every Olympiad (i.e. every four years), the Olympic Games dating back possibly further than 776 BC. In 394 AD, (after exactly 1170 years) emperor Theodosius I abolished them as they were then considered reminiscent of paganism. The first Olympic Games were in Olympia in honor of Zeus. 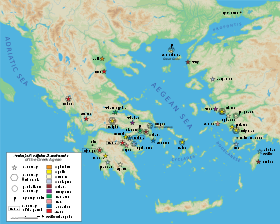 Olympia among the main Greek sanctuaries

The sanctuary, known as the Altis, consists of an unordered arrangement of various buildings. Enclosed within the temenos (sacred enclosure) are the Temple of Hera (or Heraion/Heraeum) and Temple of Zeus, the Pelopion and the area of the altar, where the sacrifices were made. The hippodrome and later stadium were also to the east.

To the north of the sanctuary can be found the Prytaneion and the Philippeion, as well as the array of treasuries representing the various city states. The Metroon lies to the south of these treasuries, with the Echo Stoa to the East. To the south of the sanctuary is the South Stoa and the Bouleuterion, whereas the West side houses the Palaestra, the workshop of Pheidias, the Gymnasion and the Leonidaion.

Olympia is also known for the gigantic ivory and gold statue of Zeus that used to stand there, sculpted by Pheidias, which was named one of the Seven Wonders of the Ancient World by Antipater of Sidon. Very close to the Temple of Zeus which housed this statue, the studio of Pheidias was excavated in the 1950s. Evidence found there, such as sculptor's tools, corroborates this opinion. The ancient ruins sit north of the Alfeios River and Mount Kronos (named after the Greek deity Kronos). The Kladeos, a tributary of the Alfeios, flows around the area. Its located in the part of Greece which is called Peloponesse. In Ancient Greece, Olympia was sacred ground to the Greeks. 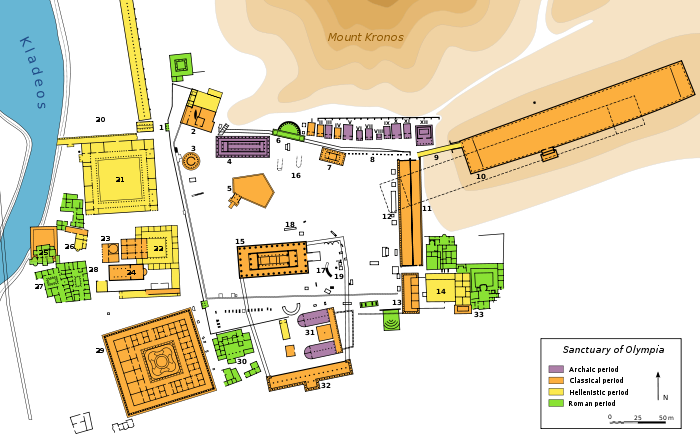 Remains of food and burnt offerings dating back to the 10th century BC give evidence of a long history of religious activity at the site. No buildings have survived from this earliest period of use.[1] Also, the charred remains of a Homo Heidelbergensis body were found at Olympia.

Ruins of the Temple of Hera

The first Olympic festival was organized on the site by the authorities of Elis in the 8th century BC - with tradition dating the first games at 776 BC. Major changes were made to the site around 700 BC, including levelling land and digging new wells. Elis' power diminished and at the beginning of the 7th century BC the sanctuary fell into the hands of the Pisatans in 676 BC. The Pisatans organized the games until the late 7th century BC.[1]

The earliest evidence of building activity on the site dates from around 600 BC. At this time the Skiloudians, allies of the Pistans, built the Temple of Hera. The Treasuries and the Pelopion were built during the course of the 6th century BC. The secular structures and athletic arenas were also under construction during this period including the Bouleuterion. The first stadium was constructed around 560 BC, it consisted of just a simple track. The stadium was remodelled around 500 BC with sloping sides for spectators and shifted slightly to the east. Over the course of the 6th century BC a range of sports was added to the Olympic festival. In 580 BC, Elis, in alliance with Sparta, occupied Pisa and regained the control over the sanctuary.[1]

The classical period, between the 5th and 4th centuries BC, was the golden age of the site at Olympia. A wide range of new religious and secular buildings and structures were constructed.[2]

The Temple of Zeus was built in the middle of the 5th century BC. Its size, scale and ornamentation was beyond anything previously constructed on the site. Further sporting facilities, including the final iteration of the stadium, and the hippodrome (for chariot-racing) were constructed. The Prytaneion was built at the north west side of the site in 470 BC.[2]

In the late classical period, further structures were added to the site. The Metroon was constructed near the Treasuries c.400 BC. The erection of the Echo Stoa, around 350, separated off the sanctuary from the area of the games and stadium. The South Stoa was built BC at the southern edge of the sanctuary at approximately the same time. 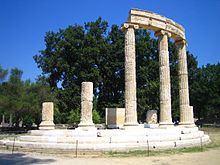 Ruins of the Philippeion

The late 4th century BC saw the erection of the Philippeion. Around 300 BC the largest building on the site, the Leonidaion, was constructed to house important visitors. Due to the increasing importance of the games, further athletic buildings were constructed including the Palaestra (3rd century BC), Gymnasion (2nd century BC) and bath houses (c.300 BC). Finally, in 200 BC, a vaulted archway was erected linking the entrance of the stadium to the sanctuary.[3]

During the Roman period, the games were opened up to all citizens of the Roman Empire. A programme of extensive repairs, including to the Temple of Zeus, and new building, took place. In 150 AD, the Nympheum (or Exedra) was built. New baths replaced the older Greek examples in 100 AD and an aqueduct constructed in 160 AD.[4]

The 3rd century saw the site suffer heavy damage from a series of earthquakes. Invading tribes in 267 AD led to the centre of the site being fortified with robbed material from its monuments. Despite the destruction the Olympic festival continued to be held at the site until the last Olympiad in 393 AD, after which a decree from the Christian emperor, Theodosius I implemented a ban. The workshop of Pheidias was turned into a Basilica and the site was inhabited by a Christian community until the late 6th century.[4]

Over time the site was buried under alluvial deposits, up to 8 meters deep, long thought to be the result of river flooding. Modern research hypothesizes instead—based on the presence of mollusc and gastropod shells and foraminifera— that the site was buried by ocean waters resulting from repeated tsunamis.[5]

The exact site was re-discovered in 1766 by the English antiquarian Richard Chandler.[6][7] The first excavation of the sanctuary at Olympia was not carried out until 1829, by the French "Expedition Scientifique de Moree".

Since the 1870s, the excavation and preservation of Ancient Olympia has been the responsibility of the German Archaeological Institute at Athens. The first major excavation of Olympia began in 1875, funded by the German government after negotiation of exclusive access by Ernst Curtius. Other archaeologists responsible for the dig were Gustav Hirschfeld, George Treu, Adolf Furtwängler (who worked alongside architects), A. Boetticher, Wilhelm Dörpfeld, and Richard Borrmann. They excavated the central part of the sanctuary including the Temple of Zeus, Temple of Hera, Metroon, Bouleuterion, Philipeion, Echo Stoa, Treasuries and Palaestra. Important finds included sculptures from the Temple of Zeus, the Nike of Paeonius, the Hermes of Praxiteles and many bronzes. In total 14,000 objects were recorded. The finds were displayed in a museum on the site.[8]

Excavation was continued in a more limited way by Dörpfeld between 1908 and 1929 but a new systematic excavation was begun in 1936 on the occasion of the 1936 Summer Olympics in Berlin under Emil Kunze and Hans Schleif. Their excavation focus was on the area to the south of the stadium, the South stoa, bath complex and gymnasion.[8]

Between 1952 and 1966, Kunze and Schleif continued the excavation joined by architect Alfred Mallwitz. They excavated Pheidias' workshop, the Leonidaion and the north wall of the stadium. They also excavated the southeast section of the sanctuary and out of approximately 140 debris pits found many bronze and ceramic objects along with terracotta roof tiles.[8] 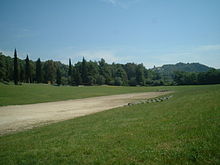 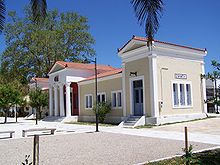 The Olympic flame of the modern-day Olympic Games is lit by reflection of sunlight in a parabolic mirror in front of the Temple of Hera and then transported by a torch to the place where the games are held. When the modern Olympics came to Athens in 2004, the men's and women's shot put competition was held at the restored Olympia stadium.

The town has a train station and is the easternmost terminus of the line of Olympia-Pyrgos (Ilia). The train station with the freight yard to its west is located about 300 m east of the town centre. It is linked by GR-74, and the new road was opened in the 1980s; the next stretch N and NE of Olympia opened in 2005. The distance from Pyrgos is 20 km, about 50 km SW of Lampeia, W of Tripoli and Arcadia and 4 km north of Krestena and N of Kyparissia and Messenia. The highway passes north of the ancient ruins. A reservoir is located 2 km southwest, damming up the Alfeios River. The area is hilly and mountainous; most of the area within Olympia is forested.

Panagiotis Kondylis, one of the most prominent modern Greek thinkers and philosophers, was born and raised in Olympia. When Pierre de Coubertin, the founder of the International Olympic Committee, died in 1937, a monument to him was erected at ancient Olympia. Emulating Evangelis Zappas, whose head is buried under a statue in front of the Zappeion, his heart was buried at the monument.[9]

The municipality Archaia Olympia ("Ancient Olympia") was formed at the 2011 local government reform by the merger of the following 4 former municipalities, that became municipal units:[10]

The municipal unit of Archaia Olympia is divided into the following communities (villages within the communities given in brackets):

Olympia, Greece is twinned with: 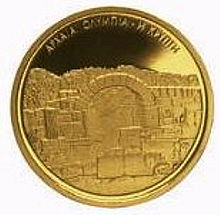