Menander
For other meanings of Menander, see Menander (disambiguation). 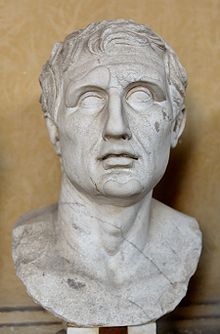 Menander (Greek: Μένανδρος, Menandros; ca. 342–291 BC), Greek dramatist, the best-known representative of Athenian New Comedy, was the son of well-to-do parents; his father Diopeithes is identified by some with the Athenian general and governor of the Thracian Chersonese known from the speech of Demosthenes De Chersoneso. He presumably derived his taste for comic drama from his uncle Alexis.[1]

Menander was the friend, associate, and perhaps pupil of Theophrastus, and was on intimate terms with the Athenian dictator Demetrius of Phalerum.[2] He also enjoyed the patronage of Ptolemy Soter, the son of Lagus, who invited him to his court. But Menander, preferring the independence of his villa in the Peiraeus and the company of his mistress Glycera, refused.[3] According to the note of a scholiast on the Ibis of Ovid, he drowned while bathing,[4] and his countrymen honored him with a tomb on the road leading to Athens, where it was seen by Pausanias.[5] Numerous supposed busts of him survive, including a well-known statue in the Vatican, formerly thought to represent Gaius Marius.

Menander was the author of more than a hundred comedies, and took the prize at the Lenaia festival eight times.[6] His record at the City Dionysia is unknown but may well have been similarly spectacular. His rival in dramatic art (and supposedly in the affections of Glycera) was Philemon, who appears to have been more popular. Menander, however, believed himself to be the better dramatist, and, according to Aulus Gellius,[7] used to ask Philemon: "Don't you feel ashamed whenever you gain a victory over me?" According to Caecilius of Calacte (Porphyry in Eusebius, Praeparatio evangelica [8]) Menander was guilty of plagiarism, his The Superstitious Man being taken from The Augur of Antiphanes. But reworkings and variations on a theme of this sort were commonplace, and the charge is a foolish one. Menander subsequently became one of the favorite writers of antiquity. How long complete copies of his plays survived is unclear, although twenty-three of them, with commentary by Michael Psellus, were said to still have been available in Constantinople in the 11th century. He is praised by Plutarch (Comparison of Menander and Aristophanes) [9] and Quintilian (Institutio Oratoria), who accepted the tradition that he was the author of the speeches published under the name of the Attic orator Charisius.[10]

An admirer and imitator of Euripides, Menander resembles him in his keen observation of practical life, his analysis of the emotions, and his fondness for moral maxims, many of which became proverbial: "The property of friends is common," "Whom the gods love die young," "Evil communications corrupt good manners" (from the Thaïs, quoted in 1 Corinthians 15:33). These maxims (chiefly monostichs) were afterwards collected, and, with additions from other sources, were edited as Menander's One-Verse Maxims, a kind of moral textbook for the use of schools.

The single surviving speech from his early play Drunkenness is an attack on the politician Callimedon, in the manner of Aristophanes, whose bawdy style was adopted in many of his plays.

Menander found many Roman imitators. Eunuchus, Andria, Heauton Timorumenos and Adelphi of Terence (called by Caesar "dimidiatus Menander") were avowedly taken from Menander, but some of them appear to be adaptations and combinations of more than one play. Thus in the Andria were combined Menander's The Woman from Andros and The Woman from Perinthos, in the Eunuchus, The Eunuch and The Flatterer, while the Adelphi was compiled partly from Menander and partly from Diphilus. The original of Terence's Hecyra (as of the Phormio) is generally supposed to be, not by Menander, but Apollodorus of Carystus. The Bacchides and Stichus of Plautus were probably based upon Menander's The Double Deceiver and Brotherly-Loving Men, but the Poenulus, does not seem to be from The Carthaginian, nor the Mostellaria from The Apparition, in spite of the similarity of titles. Caecilius Statius, Luscius Lavinius, Turpilius and Atilius also imitated Menander. He was further credited with the authorship of some epigrams of doubtful authenticity; the letters addressed to Ptolemy Soter and the discourses in prose on various subjects mentioned by the Suda [11] are probably spurious.

Loss of his work

The works of Menander did not survive the middle ages. Michael Psellus is the last writer who may have known more than we have today.[12]

Until the end of the 19th century, all that was known of Menander were fragments quoted by other authors and collected by Augustus Meineke (1855) and Theodor Kock, Comicorum Atticorum Fragmenta (1888). These consist of some 1650 verses or parts of verses, in addition to a considerable number of words quoted from Menander by ancient lexicographers. 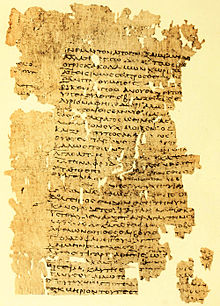 This situation changed abruptly in 1907, with the discovery of the Cairo Codex, which contained large parts of the Samia; the Perikeiromene; the Epitrepontes; a section of the Heros; and another fragment from an unidentified play. A fragment of 115 lines of the Sikyonioi had been found in the papier mache of a mummy case in 1906.

In 1959, the Bodmer papyrus was published containing Dyskolos, more of the Samia, and half the Aspis. In the late 1960s, more of the Sikyonioi was found as filling for two more mummy cases; this proved to be drawn from the same manuscript as the discovery in 1906, which had clearly been thoroughly recycled.[13]

Other papyrus fragments continue to be discovered and published.

Another bust, from the Hermitage Museum.

In 2003, a palimpsest manuscript, in Syriac writing of the 9th century, was found where the reused parchment comes from a very expensive 4th century Greek manuscript of works by Menander. The surviving leaves contain parts of the Dyskolos and 200 lines of another, so far unidentified, piece by Menander. [12][14]

"He who labors diligently need never despair, for all things are accomplished by diligence and labor." -Menander

"The die has been cast," in Latin "Alea iacta est", famously quoted by Julius Caesar upon deciding to engage in civil war [15]