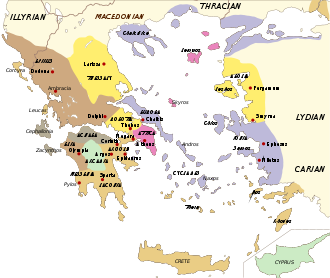 Distribution of Greek dialects in the classical period.[1]

Attic Greek is the prestige dialect of Ancient Greek that was spoken in Attica, which includes Athens. Of the ancient dialects, it is the most similar to later Greek, and is the standard form of the language studied in courses of "Ancient Greek". It is sometimes included in Ionic.

Greek is a branch of the Indo-European language family, which includes English. In historical times, it already existed in several dialects (see article on Greek dialects), one of which was Attic.

The earliest written records in Greek date from the 16th to 11th centuries BC and exist in an archaic writing system, Linear B, belonging to the Mycenaean Greeks. The distinction between Eastern and Western Greek is believed to have arisen by Mycenaean times or before. Mycenaean Greek represents an early form of Eastern Greek, a main branching to which Attic also belongs. Because of the gap in the written record between the disappearance around 1200 BC of Linear B and the earliest inscriptions in the later Greek alphabet around 750 BC,[2] the further development of dialects remains opaque. Later Greek literature wrote of three main dialect divisions: Aeolic, Doric and Ionic. Attic was part of the Ionic dialect group. "Old Attic" is a term used for the dialect of Thucydides (460-400 BC) and the dramatists of Athens' remarkable 5th century; "New Attic" is used for the language of later writers.[3]

Attic Greek persisted until the 3rd century BC, when it was replaced by its similar but more universal offspring, Koine Greek, or "the Common Dialect" (ἡ κοινὴ διάλεκτος). The cultural dominance of the Athenian Empire and the later adoption of Attic Greek by king Philip II of Macedon (382-336 BC), father of the conqueror Alexander the Great, were the two keys that ensured the eventual victory of Attic over other Greek dialects and the spread of its descendant, Koine, throughout Alexander's Hellenic empire. The rise of Koine is conventionally marked by the accession in 285 BC of (Greek-speaking) Ptolemy II, who ruled from Alexandria, Egypt and launched the "Alexandrian period", when the city of Alexandria and its expatriate Greek-medium scholars flourished.[4]

In its day, the original range of the spoken Attic dialect included Attica, Euboea, some of the central Cyclades islands, and northern Aegean coastal areas of Thrace (i.e. Chalcidice). The closely related dialect called "Ionian" was spoken along the western and northwestern coasts of Asia Minor (modern Turkey) on the east side of the Aegean Sea. Eventually, literary Attic (and the classic texts written in it) came to be widely studied far beyond its original homeland, first in the Classical civilizations of the Mediterranean (Ancient Rome and the Hellenistic world), and later in the Muslim world, Europe, and wherever European civilization spread to other parts of the world.

The earliest recorded Greek literature, that attributed to Homer and dated to the 8th or 7th centuries BC, was not written in the Attic dialect, but in "Old Ionic". Athens and its dialect remained relatively obscure until its constitutional changes led to democracy in 594 BC, the start of the classical period and the rise of Athenian influence.

The first extensive works of literature in Attica are the plays of the dramatists Aeschylus, Sophocles, Euripides and Aristophanes in the 5th century BC. The military exploits of the Athenians led to some universally read and admired history, the works of Thucydides and Xenophon. Slightly less known because they are more technical and legal are the orations by Antiphon, Demosthenes, Lysias, Isocrates and many others. The Attic Greek of the philosopher Aristotle (384-322 BC), whose mentor was Plato, dates from the period of transition from Classical Attic to koine.

Students learning Ancient Greek today usually start with the Attic dialect, proceeding, depending on their interest, to the koine of the New Testament and other early Christian writings, or Homeric Greek to read the works of Homer and Hesiod, or Ionic Greek to read the histories of Herodotus and the medical texts of Hippocrates. 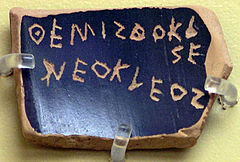 A ballot voting against Themistocles son of Neocles under the Athenian Democracy (see ostracism). Note the last two letters of Themistocles are written boustrophedon and E is used for both long and short e; that is, this is the epichoric alphabet.

The first form of written Greek was not the Greek alphabet as it later became known, but the syllabary known as Linear B, in which one character stood for the combination of a consonant and a vowel.

The first use of what became the classic Greek alphabet remains unknown. By the time it was attested for in general use in the 8th century BC[5] it was already divided into a western and eastern variety, from which the Etruscan/Latin alphabets and the later Greek alphabet came respectively. What is today referred to as the Greek alphabet was originally the Phoenician alphabet borrowed to spell Greek words, with some originally Semitic consonantal letters – such as aleph (Greek Alpha = A), he (Greek Epsilon = E), and 'ayin (Greek Omicron = O) – used to represent Greek vowels. The creation of true vowel letters was the most revolutionary linguistic contribution of the Greeks to the development of the alphabet. (For the early forms of the letters, the full complement of letters, and the first inscriptions, see the article Greek alphabet.)

As the utility of an alphabet became evident, local varieties (sometimes called "epichoric"[6]) came into use. The early Attic alphabet still did not distinguish between long and short vowels (i.e. ε and η, ο and ω). It lacked the letters Ψ (psi) and Ξ (xi), using ΦΣ and ΧΣ instead. Lower case letters (α, β, γ, etc.) and iota subscript (a mediaeval invention) were still far in the future. Digamma (no longer in use in the Classical period) stood for a W.

Meanwhile in Ionia across the Aegean, a new Ionic form of the Attic alphabet was coming into being. It distinguished between long and short o (Ω and Ο) and stopped using Η (eta) to mark the rough breathing (i.e. H sound). Instead it created a sign for a long e with it, keeping the letter Ε for the short e. The digamma dropped out, and Ψ and Ξ came into existence, bringing the Attic alphabet to its classic 24-letter form. By 403 BCE, the by now internationally experienced city-state of Athens had perceived a need to standardize the alphabet, so it officially adopted the Ionic alphabet in that year. Many other cities had already adopted it.[citation needed]

When the ordinary citizen of Ancient Greece read inscriptions and the educated Greek read literature, what they saw was an all upper case Ionic alphabet: Α, Β, Γ, Δ, etc. By the time lower case letters, iota subscripts, accent marks, rough or smooth breathing marks over letters, and punctuation appeared in written Greek in the Middle Ages, Attic Greek writings had not been produced by native speakers for some centuries. Ancient Attic literature as published today thus makes use of a number of such non-ancient features. Uninformed modern readers might think that what they see on the page is the writing system exactly as the ancient Greeks used it in Classical Greece, but it is really Ancient Greek as transcribed by mediaeval Byzantine scribes.

Proto-Greek and other dialects' /u/ (English food) became Attic /y/ (pronounced as German ü, French u), represented by y in Latin transliteration of Greek names.

In the diphthongs eu and au, upsilon continued to be pronounced [u].

In the original long diphthongs with i, the i stopped being pronounced: āi, ēi, ōi → ā, ē, ō. The mediaeval iota subscript indicates this fact.

Attic ē (from long e-grade of ablaut or Proto-Greek ā) is sometimes shortened to e:

Attic deletes of one of two vowels in a row.

Proto-Greek and Doric t before i or y → Attic-Ionic s (palatalization).

Proto-Greek w (digamma) was lost in Attic before historical times.

Attic-Ionic places an n (movable nu) at the end of some words that would ordinarily end in a vowel, when the next word starts with a vowel, to prevent hiatus (two vowels in a row).

Morphology as used here means "word formation." It can also include inflection, the formation of the forms of declension or conjugation by suffixing endings, but that topic is presented under Ancient Greek grammar.

In addition to singular and plural numbers, Attic Greek had the dual number. This was used if only two nouns were involved and was present as inflection in noun, adjectives, pronouns and verbs (any categories inflected for number). Attic Greek was the last dialect to retain this from older forms of Greek and the dual number had died out by the end of the fifth century before Christ.

With regard to declension, the stem is the part of the declined word to which case endings are suffixed. In the a-, alpha- or first declension feminines, the stem ends in long a, parallel to the Latin first declesion. In Attic-Ionic the stem vowel has changed to long e (eta) in the singular, except (in Attic only) after e, i, r: gnome, gnomes, gnome(i), gnomen, etc., "opinion", but thea, theas, thea(i), thean, etc., "goddess."

The plural is the same in both cases: gnomai and theai, but other sound changes were more important in its formation. For example, original -as in the nominative plural was replaced by the diphthong, -ai, which did not undergo the change of a to e. In the few a-stem masculines, the genitive singular follows the o-declension: stratiotēs, stratiotou, stratiotēi, etc.

In the o-, omicron- or second declension, mainly masculines (but some feminines), the stem ends in o or e, which is composed in turn of a root plus the thematic vowel, an o or e in Indo-European ablaut series parallel to similar formations of the verb. It is the equivalent of the Latin second declension. The alternation of Greek -os and Latin -us in the nominative singular is familiar to readers of Greek and Latin.

In Attic Greek an original genitive singular ending *-osyo after losing the s (as happens in all the dialects) lengthens the stem o to the spurious diphthong -ou (see above under Phonology, Vowels): logos "the word", logou from *logosyo, "of the word". The dative plural of Attic-Ionic had -oisi, which appears in early Attic but simplifies to -ois in later": anthropois "to or for the men".

The varieties of Classical-era Attic are: