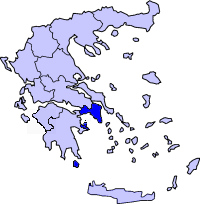 Attica ( _el. Αττική, "Attikí"; IPA-all|atiˈkʲi) is a periphery (subdivision) in , containing , the capital of Greece. Attica is subdivided into the prefectures of Athens, Piraeus, and .

Located in the south of the country, Attica covers about 3,808 square kilometers. In addition to Athens, it contains within its area the cities of , , , , and Marathon, as well as a small part of the peninsula and the islands of Salamis, , , Hydra, , , and . About 3,750,000 people live in the periphery, of which more than 95% are inhabitants of the Athens metropolitan area.

Athens was originally the capital of .

Attica is a jutting into the . It is naturally divided to the north from Boeotia by the convert|10|mi|km|0|abbr=on long mountain range. Mountains separate the peninsula into the plains of Pedia, Mesogeia, and Thriasia. The mountains include , the eastern portion of , , and the mountains. To the north it is bordered by the n plain and to the west it is bordered by Corinth. The lies to the south and the island of lies off the north coast. Athens' first and only large reservoir, , is about convert|42|km|mi|0|abbr=on northeast and is called the Marathon Dam, which first opened in the 1920s. Since that time, it has been Attica's largest lake. Forests cover the area around Parnitha, around Hymettus and into the northeast and the north in the hills and the mountains, except for the mountaintops, but the mountains to the west and the south are grassy, barren or forested.

The River is the longest river, and Parnetha or Parnitha is the tallest mountain in Attica. The prefecture also has parklands in the Hymettus, Penteli and the Parnitha mountains and the southern part of the peninsula.

During the Classical period, Athens was fortified to the north by the fortress of , which is preserved in an almost perfect condition. Other fortresses are those of Oenoe, and . On the coast, Athens was fortified by the walls at , , , , and , in order to protect the mines at [diocles.civil.duth.gr/links/home/database/periferiaprotevousis/pr05hi.pdf] .

Even though remains are found in nearly the whole area of Attica, the most important of them all are the remains found in . The worship of the goddess and Cora, deriving from the period, continued until the late years of antiquity.Many other types of worship can be traced back to the years. For example, the worship of and the was common in many areas of Attica such as , Parnes and . The god of wine, , was worshipped mainly in the area of , nowadays the suburb of . and were worshipped in , in , on , on and in Daphne. [diocles.civil.duth.gr/links/home/database/periferiaprotevousis/pr05hi.pdf]

After the period of antiquity, Attica came under , , and rule.During the period, Athens was invaded by the under the commands of in 396 AD. Attica's population diminished in comparison to the neighboring area of .The sites of historical interest date back to the 11th and 12th century, when Attica was under the rule of the .The great monastery of Dafni that was built under 's rule is an isolated case that does not signify a widespread development of Attica during the Byzantine period. On the other hand, the buildings built during the 11th and 12th century show a greater flourishment, that continues during the rule of the Franks, that did not impose a strict rule.During the rule, Athens enjoys some rights. On the contrary, that is not the case for the villages of Attica. Great areas were possessed by the , who terrorized the population with the help of (σπάχηδες). The monasteries of Attica play a crucial role in preserving the Greek element of the villages.In spite of its conquerors, Attica managed to maintain its traditions. This fact is proven by the preservation of the ancient toponyms such as , , and .During the , the peasants of Attica were the first to revolt (April 1821) and they occupied and seized the , that is handed over to the Greeks in June, 1822. [diocles.civil.duth.gr/links/home/database/periferiaprotevousis/pr05hi.pdf]

Attica has, since 1829, belonged to the independent Greek state. Its inhabitants were, among others, mostly , an Albanian-speaking people.

From 1834, was refounded and made the new Greek capital (moved from in ), and Greek-speaking people gradually began to repopulate Attica. The most dramatic surge came with Greek refugees from following the population exchanges between Greece and under the . Today, much of Attica is occupied by the Athens .

The modern Greek periphery of Attica includes classic Attica as well as the , a small part of the around , and the Ionian Island of .

The climate is typically Mediterranean, with hot dry summers and generally low rainfall totals. Annual precipitation varies from 370 mm to over 1000 mm. Winters are cool and generally mild in the low-lying areas adjacent to the sea, but are harsher in the mountains. It is often the case that snowfalls cause disruption in areas of Attica, although these disruptions are rarely widespread for the whole of the region of Athens, with the latest cases being in January 2002, February 2004 and January 2006. The absolute minimum temperature of the region is -10.4°C and was recorded at Votanikos, Athens, while the highest temperature was recorded at Tatoi (airport) and was +48.7°C. s and s are common.

Numerous ferry lines, both normal ferries and the "flying dolphins" (fast sea vessels), connect the port of Piraeus with the islands of the periphery.

The former provinces in italics no longer exist.