Hercules
This article is about the Roman mythological hero. For the Greek mythic hero from which Hercules was adapted, see Heracles. For other uses, see Hercules (disambiguation). 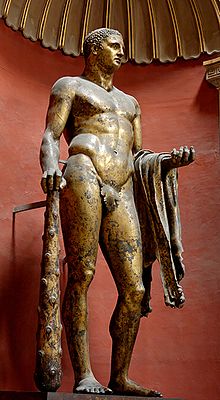 Hercules is the Roman name for Greek demigod Heracles, son of Zeus (the Greek equivalent of the Roman god Jupiter), and the mortal Alcmene. Early Roman sources suggest that the imported Greek hero supplanted a mythic Italic shepherd called "Recaranus" or "Garanus", famous for his strength who dedicated the Ara Maxima that became associated with the earliest Roman cult of Hercules.[2] While adopting much of the Greek Heracles' iconography and mythology as his own, Hercules adopted a number of myths and characteristics that were distinctly Roman. With the spread of Roman hegemony, Hercules was worshiped locally from Hispania through Gaul.

Hercules' Latin name was not directly borrowed from Greek Heracles but is a modification of the Etruscan name Herceler, which derives from the Greek name via syncope, Heracles translates to "The Glory of Hera". An oath invoking Hercules (Hercule! or Mehercle!) was a common interjection in Classical Latin.[3] 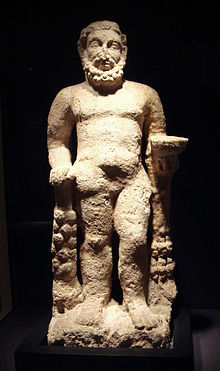 In Roman works of art and in Renaissance and post-Renaissance art that adapts Roman iconography, Hercules can be identified by his attributes, the lion skin and the gnarled club (his favorite weapon): in mosaic he is shown tanned bronze, a virile aspect.[4]

According to mythology, Hercules was the illegitimate son of Jupiter (Zeus) and Alcmene, the wisest and most beautiful of all mortal women. Juno (Hera) was enraged at Jupiter for his infidelity with Alcmene, and even more so that he placed the infant Hercules at her breast as she slept and allowed him to feed, which caused Hercules to be partially immortal, thus, allowing him to surpass all mortal men in strength, size and skill.

Juno held a spiteful grudge against Hercules and sent him into a blind frenzy, in which he killed all of his children and his wife. When Hercules regained his sanity, he sought out the Oracle at Delphi in the hope of making atonement. The Oracle ordered Hercules to serve Eurystheus, king of Mycenae, who sent him on a series of tasks known as the Labors of Hercules. These tasks are told in this order:

While he was a champion and a great warrior, he was not above cheating and using any unfair trick to his advantage. However, he was renowned as having "made the world safe for mankind" by destroying many dangerous monsters. Although he was a famous demigod, he still could not prevent his death. 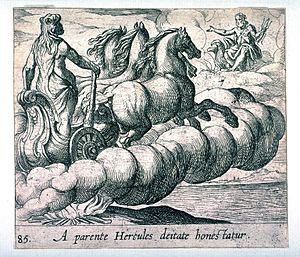 The Immortalization of Hercules

Hercules was married to Deianeira. One day, long after Hercules' marriage to Deianira, the centaur Nessus offered to ferry them across a wide river that they had to cross. Nessus set off with Deianeira first, but tried to abduct her. When Hercules realized the centaur's real intention, Hercules chased after him and shot him with an arrow which was poisoned with Hydra's blood. Before he died, Nessus told Deianeira to take some of his blood and treasure it, since it was a very powerful medicine and: if she ever thought Hercules was being unfaithful, the centaur told her, the blood would restore his love. Deianeira kept the vial of blood.

Many years after that incident she heard rumours that Hercules had fallen in love with another woman. She smeared some of the blood on a robe and sent it to Hercules by a servant named Lichas. Lichas spilled some blood on the floor and when the sun's rays fell on it the blood begun to burn. Because of this Deianeira began to suspect Nessus's advice and decided to send another servant to fetch Lichas back before he could hand over the blood soaked robe to Hercules. She was too late. Hercules had already put on the robe and when he did so the blood still poisoned from the same arrow used by Hercules, burnt into his flesh. When he jumped into a nearby river in hope of extinguishing the fire, it only made it worse. When he tried to rip off the robe from his body his organs were also ripped off with it.

Furiously, Hercules caught Lichas and tossed him into the sea. After that he told his friend Philoctetes to build him a pyre on the mountain Oata. He was burnt to death on the pyre. Before dying, Hercules offered his bow and arrows as a token of gratitude to Philoctetes. His father Zeus then turned him into a god. Deianeira, after hearing what she had caused, committed suicide.

Tacitus records a special affinity of the Germanic peoples for Hercules. In chapter 3 of his Germania, Tacitus states:

... they say that Hercules, too, once visited them; and when going into battle, they sang of him first of all heroes. They have also those songs of theirs, by the recital of this barditus[5] as they call it, they rouse their courage, while from the note they augur the result of the approaching conflict. For, as their line shouts, they inspire or feel alarm.

In the Roman era Hercules' Club amulets appear from the 2nd to 3rd century, distributed over the empire (including Roman Britain, c.f. Cool 1986), mostly made of gold, shaped like wooden clubs. A specimen found in Köln-Nippes bears the inscription "DEO HER[culi]", confirming the association with Hercules.

In the 5th to 7th centuries, during the Migration Period, the amulet is theorized to have rapidly spread from the Elbe Germanic area across Europe. These Germanic "Donar's Clubs" were made from deer antler, bone or wood, more rarely also from bronze or precious metals. They are found exclusively in female graves, apparently worn either as a belt pendant, or as an ear pendant. The amulet type is replaced by the Viking Age Thor's hammer pendants in the course of the Christianization of Scandinavia from the 8th to 9th century.

Hercules has been the main motif of many collector coins and medals, the most recent one is the 20 euro Baroque Silver coin issued on September 11, 2002. The obverse side of the coin shows the Grand Staircase in the town palace of Prince Eugene of Savoy in Vienna, currently the Austrian Ministry of Finance. Gods and demi-gods hold its flights, while Hercules stands at the turn of the stairs.

A series of nineteen Italian Hercules movies were made in the late 1950's and early 1960's. The actors who played Hercules in these films were Steve Reeves, Gordon Scott, Kirk Morris, Mickey Hargitay, Mark Forest, Alan Steel, Dan Vadis, Brad Harris, Reg Park, Peter Lupus (billed as Rock Stevens) and Michael Lane. The films are listed below by their American release titles, and the titles in parentheses are the original Italian titles with English translation.

A number of English-dubbed Italian films that featured the Hercules name in their title were never intended to be Hercules movies by their Italian creators.